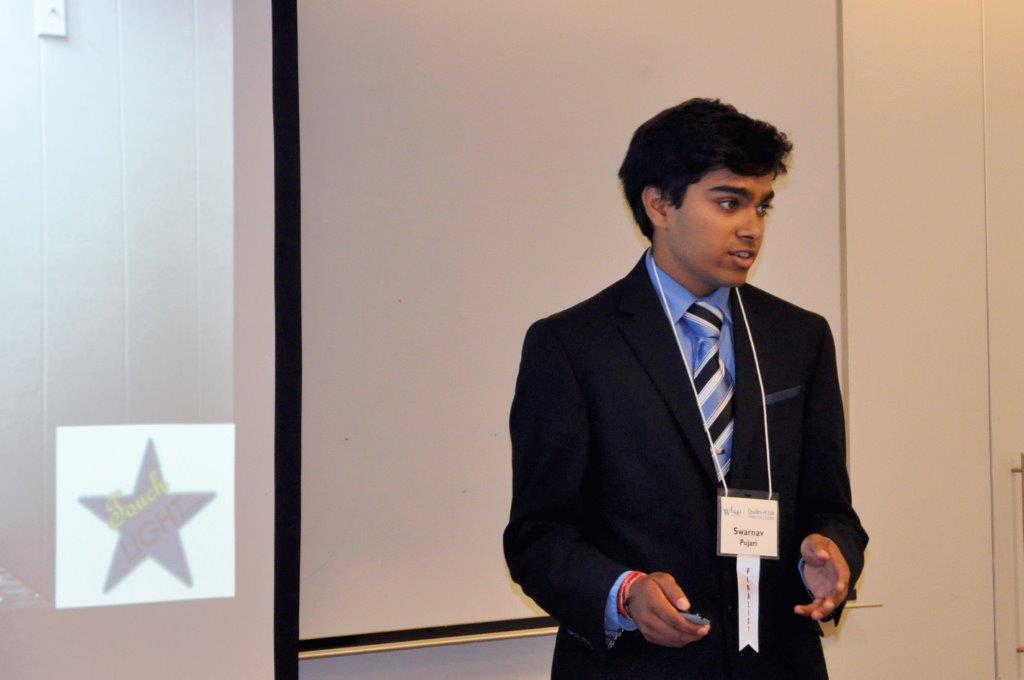 At 19 years old, Swarnav Pujari wants to do nothing less than “revolutionize the energy market.”

The University of Illinois materials science and engineering student envisions office buildings, convention centers and tourist attractions powered simply by the hundreds of people who walk through them each day.

Pujari’s company, Touch Light Innovations Inc., has made “Power Pads,” one-square-foot devices that are placed under flooring or carpet and generate energy with each footfall.

The technology has won awards and investment and been showcased at a minor league basketball game in New York state, where fans walked across the pads to illuminate LED lights. This spring, Pujari and his partners in Touch Light plan a large-scale, flashy interactive demonstration project in Illinois.

“He has the ability with this technology to create an energy source at a very personal level,” said Steve Webster, director of the Clean Tech Open Midwest. “It may simply be put in place to charge your mobile device, your iPad or phone. That was intriguing to us. Then there’s the fact that if you could replicate this, the energy source is everywhere – foot traffic.”

A new take on an old idea

Webster said he could envision Power Pads underlying pedestrian skyways like the ones that connect office buildings and hotels throughout downtown Minneapolis.

“Then along that pathway you can set up these nanogrids that would perhaps be for charging stations or a company or a storefront, a retailer along the route could tap into the foot traffic,” Webster said. “You’re harvesting energy where right now there is none.”

Pujari said in the right locations, the energy savings could add up.

“Somewhere like Navy Pier or Times Square, it becomes a supplemental source of energy, the goal is to work alongside renewables,” Pujari explained, launching into his polished elevator pitch. “We work while you play. You can put hardwood, ceramics on top, you don’t know we exist, but we’re down there generating power for you.”

A University of Illinois blog post describes how the technology works: “The process for Power Pad is similar to piezoelectric materials, an emerging group of materials that utilize special crystals to generate electricity. In this case, it takes mechanical energy and when applied to the crystal through deformation causes a charge differential. When that charge differential occurs, electricity is formed.”

There are other similar technologies in development and on the market, including Pavegen, whose floor tiles have been deployed in train stations, malls and other public spaces. A skeptical column on the snarky British technology site The Register mocked Pavegen as producing “tiny, pointless amounts of energy” that couldn’t be efficiently pooled to power anything.

But Pujari said he has evidence his creation generates significantly more energy than competitors – and at lower cost – by using different technology. He declines to describe the specifics; saying it is a trade secret.

Webster said that it is the business plan which will make or break a technology like Pujari’s.

“The idea isn’t new. It will be all about whether his business plan is better than the competition’s,” said Webster. “Is his technology superior? It may be. Can we combine the technology with the logistics of producing and distributing and standing up that technology on location? That’s what the business plan is about. The accelerator is about helping him build that entire system.”

While still in the early stages, Pujari feels confident his technology will be a “game changer,” if his team can just get the investment they need to scale it up. “The Power Pad is easy to initially build, and [more advanced] mechanical systems within the Power Pad are doable if you have enough mind and enough money,” he said.

Webster and other experts who have worked with Pujari say they are impressed by his persistence.

“What differentiates him from many others is his drive and determination, he is not easily discouraged,” said Webster, who is also managing director of the Center for Social Entrepreneurship at the University of St. Thomas Schulze School of Entrepreneurship. “So when a speed bump lands in front of his company, he finds a way over and around it in pretty remarkable ways.”

Pujari is not modest about expressing his own self-confidence.

“Effectively what I’m doing here is trying to build an industry, a legacy, so that when I die people remember me for doing something for the world,” Pujari said. “And nothing will be able to stop me from getting where I want to. When I see an opportunity, I will not let go of it.”

“I was always the kind of person who liked to tinker, not so much into computers, but the cliché Lego kid who likes to mess around with things, the type of kid who’s curious,” he said.

His grandfather in India sent him a thick book including “everything he knew about renewable energy,” Pujari remembers. He built his own renewable energy lab in the family’s basement.

At age 11, he was part of a team from his school in Yorkville, New York that designed a car powered by wind, solar and battery power. The New York Times covered the Ford engineering competition, and described Pujari as “sounding more like a Ph.D. candidate than a fifth grader as he explained how wind would come in through the front grille, hit a turbine that moved a shaft to make energy that would go to a generator.”

But at that time, he saw himself primarily as a drummer and a baseball player.

“My goal was to go to University of Connecticut for baseball as a pitcher,” he said. “But due to pancreatitis in 11th grade, I almost lost my life and baseball became an obsolete dream at that point. Luckily I had this thing, and my mentors told me, ‘Yeah, go ahead and pursue it.’”

By the time he graduated from Yorktown High School in Westchester County in 2015, Pujari had a host of engineering awards under his belt. He won the grand prize in the Westchester Science and Engineering Fair, and he was a finalist in the high-profile Intel International Science Fair. He also won a gold medal in engineering at the 2015 International Sustainable World Energy, Engineering, and Environment Project (ISWEEP) Olympiad.

This spring, Touch Light won second prize and $10,000 at the Cozad New Venture Challenge at the University of Illinois, along with becoming a Clean Tech Open finalist.

Purdue University assistant engineering professor Wenzhuo Wu mentored Pujari starting when he was a high school student in 2013. In an article on the Purdue website, Wu describes how Pujari was inspired by research by Dr. Zhong Lin Wang at Georgia Tech, Wu’s postdoctoral advisor, and how Pujari developed a nanogenerator for the Power Pad over his summer vacation.

“This Power Pad prototype is a very good example of how nanoscience and nanotechnology can be organically integrated into the STEM training of K-12 and undergraduate students,” Wu wrote.

Phyllis Frankfort is the president and CEO of Working in Support of Education (WISE), a New York non-profit whose programs include a high-profile problem-solving competition for high school students. Pujari won the grand prize.

“He’s enormously tenacious. He values input from others. He’s very good at networking. He listens well,” said Frankfort. “He’s very smart, but most importantly he’s passionate and creative. He’s one of those individuals who just stands out and tugs at your heart. We will hear more about him.”