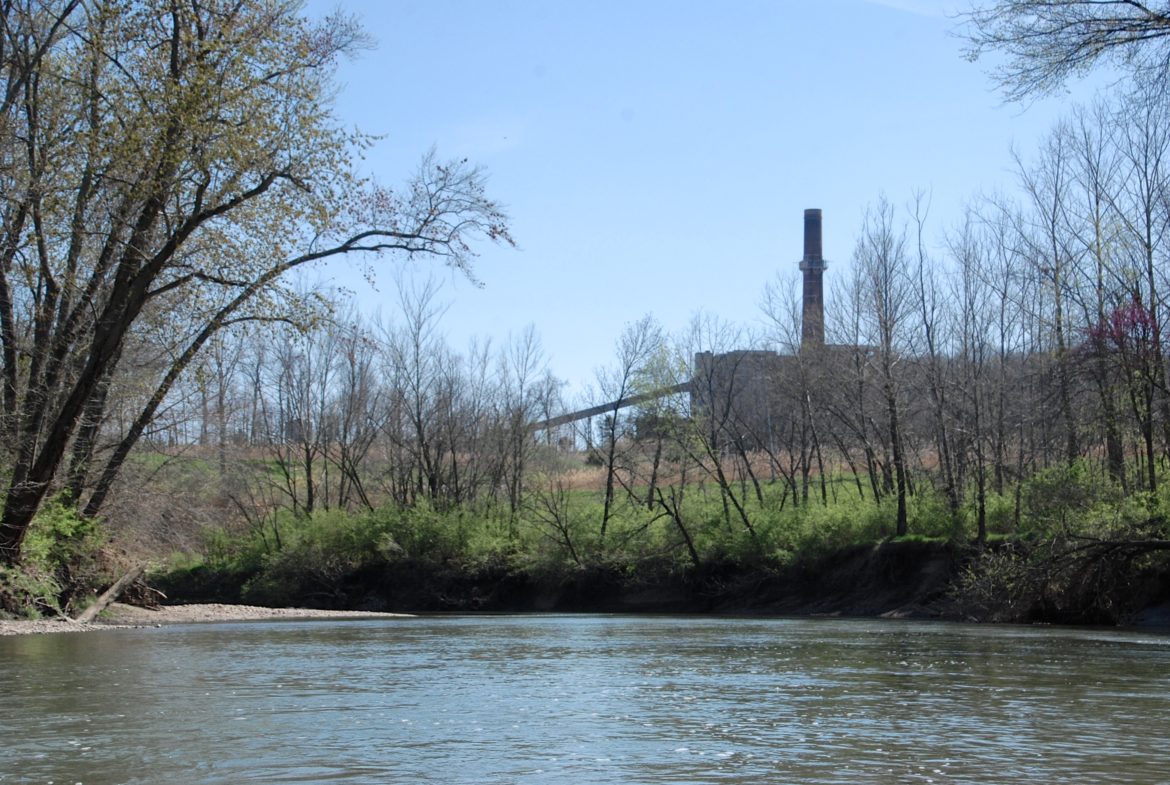 VERMILION RIVER MIDDLE FORK, ILLINOIS — As a persistent rain pelts the clear, swift Middle Fork of the Vermilion River on a mid-September day, the water swells and rises. Clumps of tree roots hang precariously over the river, exposed by the crumbly, receding banks. Where the bank is firmer, the water has carved out tiny caves.

This is Illinois’s only river to win the federal “Wild and Scenic” designation, and the way the water shapes and gouges the banks is exactly what wild rivers do, changing course and choosing different paths.

But this natural process could create a big problem on the Middle Fork of the Vermilion, because the flood plain that was historically the river’s playground contains 3.3 million cubic yards of toxic coal ash, stored in pits near a Dynegy coal-fired power plant that closed in 2011.

That proximity creates a potential risk that currently does not appear to be addressed by federal or state regulation.

Advocates are worried that erosion from the river could eventually collapse or puncture the man-made impoundments containing the coal ash, spilling it into a river that is a popular destination for tubing, paddling and fishing and runs through the nearby town of Danville, where a riverfront revitalization is underway.

The ash pits are adjacent to the Kickapoo State Recreation area, where campgrounds and trails were built on the site of a turn-of-the-century coal strip mine. The park’s website touts the “crystal clear ponds” where water filled pits from strip mining and the “luxuriantly forested ridges and hillsides” that are a testament to “the regenerative powers of nature” on 1,290 acres of mined lands purchased in 1939 from United Electric Coal Company.

Studies have shown the river hosts 57 types of fish, 45 types of mammals and 190 types of birds, with 24 of the species listed as threatened or endangered.

Advocates feel all this could be at risk if action is not taken to deal with the coal ash pits. But this issue seems to fall into a regulatory gray area. The coal ash impoundments currently meet state requirements for stability. Federal rules on coal ash storage do not apply to the site. And in general, regulations are unlikely to address future risk from the movement of the river.

So it will take public pressure and political will to drive proactive measures, as advocates see it.

In October, Dynegy is scheduled to begin constructing 485 feet of new reinforcements to a severely-eroding part of the riverbank outside its ash pits. Advocates see this as a necessary emergency step. But they feel like it only delays inevitable continued erosion, and they are demanding long-term protections – moving the ash to new, lined pits that could be built on Dynegy’s property farther from the river.

“This is a band-aid solution,” said Andrew Rehn, water resources engineer for the Prairie Rivers Network, about the planned fortifications. “We should take this moment to look at what we’re going to do in the long run.”

Dynegy spokesman David Onufer said that with the October work, “the intention is to reestablish the riverbank approximately 30 feet east of where it has eroded…We’ll install rocks, place soil, and transplant native vegetation to secure the new riverbank.”

Onufer continued that “Dynegy sees the Middle Fork Vermilion River as a huge natural asset for the state of Illinois and takes our responsibility for protecting it seriously….Registered professional engineers annually inspect the berms of the Vermilion ponds for structural stability. In addition, Dynegy routinely performs visual checks of site conditions. Riverbank restoration activities will be performed as necessary if significant river bank erosion is observed.”

Dynegy acquired the Vermilion coal-fired plant in 2000 with its purchase of the Illinois Power Company. Since its launch in the 1950s, the plant has stored coal ash onsite. In 2011 the plant closed, a victim of competition from cheaper natural gas-fired power and other factors driving the closing of coal plants nationwide.

Advocates are worried that if Dynegy isn’t forced to make major overhauls at the site in the near-term, it will end up completing its closure responsibilities, selling the land or deeding it to the state, and taxpayers will be on the hook for any future problems.

“With our state budget in the situation it is, why would officials not prioritize a solution that is paid for by the company?” asked Pam Richart, who along with her husband, Lan, ran an environmental consulting firm and then co-founded the advocacy group Eco-Justice Collaborative. “Dynegy knew about this situation when they bought the plant. It’s not a surprise.”

Onufer said the company “will consider selling the property to the state if they are interested in expanding the recreational opportunities in that area.”

Dynegy has submitted a proposed Corrective Action Plan resulting from a notice of violation it received from the Illinois EPA in 2012 for polluting groundwater with metals from the coal ash. The plan includes installing caps on the ash pits to prevent rainwater from infiltrating and pushing contaminants down into the groundwater.

“Our timeline is dependent on IEPA approval, so we are in a holding pattern and not legally allowed to implement corrective actions until we hear back,” said Onufer. “The IEPA is currently working on new ash pond closure rules, so it seems unlikely they will act on Dynegy’s proposal until after those new rules are completed.”

Advocates lament the slow process, and also that the corrective action deals only with groundwater, and doesn’t directly address the future stability of the impoundments. They also posit that caps will do nothing to stop groundwater running through the ash pits from the higher natural slopes on the opposite side of the impoundments. And they worry the weight of a cap could even make the impoundments more vulnerable to collapse in the future. The fact that parts of the ash pits are built over former underground mine shafts are also a concern.

Onufer said that there are no wells drawing on groundwater for drinking water within nearly half a mile of the pits, and he said that no adverse effects on the river have been found.

Last year federal rules were adopted – after a long, contentious process – governing the storage of coal ash. But those rules do not apply to closed plants. Illinois is in the process of adopting state rules on coal ash that essentially mirror the federal rules. Advocates are pushing for the state to include a provision covering closed coal plants.

But even if the state adopts rules applying the federal provisions to closed coal plants, it would not necessarily address the concerns about the river threatening the impoundments at Vermilion.

“Without rules [applying to closed sites] there’s this piecemeal process of looking at it,” said Jessica Dexter, a staff attorney with the Environmental Law & Policy Center. “If you just look at it through the groundwater lens, will that solve the risk to the river? For plants not subject to federal rules, there’s very little in the proposed state rule that would create standards for what they need to do. As to Vermilion, we need a solution that gets the coal ash out of the river’s way.”

Holding back a river

In 2005 a pit known as New East was built near the Old East pit. The banks closest to it have shown considerable erosion.

Dynegy has sought approval from various state and federal agencies to undertake riverbank stabilization near this pit. Extra approvals for such work are needed given the river’s “wild and scenic” designation. After much back and forth with agencies, Dynegy gained needed approval from the Army Corps of Engineers for the stabilization work set to start in October.

The Eco-Justice Collaborative says that about 600 feet are in need of immediate stabilization, and they think Dynegy requested approval for less than 500 feet of work to avoid more stringent requirements that kick in at that distance. The plan, therefore, could leave more than 100 feet of unstable bank exposed.

In June, the National Park Service regional director released the agency’s findings on Dynegy’s plans for riverbank stabilization. The park service approved the plans, but urged the removal of the ash and other remnants of the closed coal plant. The letter said the coal ash storage “is in direct conflict with the river and is encroaching upon the river.” It added that it “presents a water quality hazard and a constraint to the river’s free-flowing condition and natural river processes.”

A consultant hired by Dynegy to do a geotechnical report determined in 2013 that the coal ash pits are 35 feet away from the banks of the river.

Rehn argues that an average annual rate is not an appropriate measure for erosion, since one big storm could mean multiple feet of erosion. And if the river changes course significantly, for example cutting a new channel or “short cut,” the intensity of flow can change dramatically.  Extreme winter storms in 2015 caused significant erosion. And the National Park Service reported that 20 feet of streambank was lost to erosion between 2009 and the present.

Meanwhile intense rainfalls are only expected to increase with climate change.

“Erosion isn’t just this slow and steady process,” said Rehn. “It jumps. And we’re seeing a trend, that is only going in one direction.”

URS explored several options for mitigating the risk of erosion. It says the ash could be moved farther away from the river; that the ash impoundment walls could be fortified or flattened to reduce risk of failure; that cement could be mixed with the ash to stabilize it; that a new channel could be created for the river; or that the river could be contained through the use of gabion walls – essentially wire cages filled with rocks.

URS recommends the last alternative, saying: “Gabions are a low-cost, effective solution to minimizing river bank erosion. The installation of gabions is less invasive than what would be required by the other alternatives… Also, gabions have proven to be effective at the Vermilion site already.”

URS notes that gabions were installed by the Old East pit around 1980. There has been basically no erosion since then on that stretch of river, their report says.

However, in multiple spots along the Vermilion the cages are partially empty, as the river has mangled and twisted the wires and allowed rocks to tumble out. The fabric that once covered the cages hangs in shreds, coated with mud and algae.

While the gabions apparently have held off erosion for years in some spots, the Richarts and Rehn point to the deteriorating condition of gabions to say that option is bound to be a losing battle.