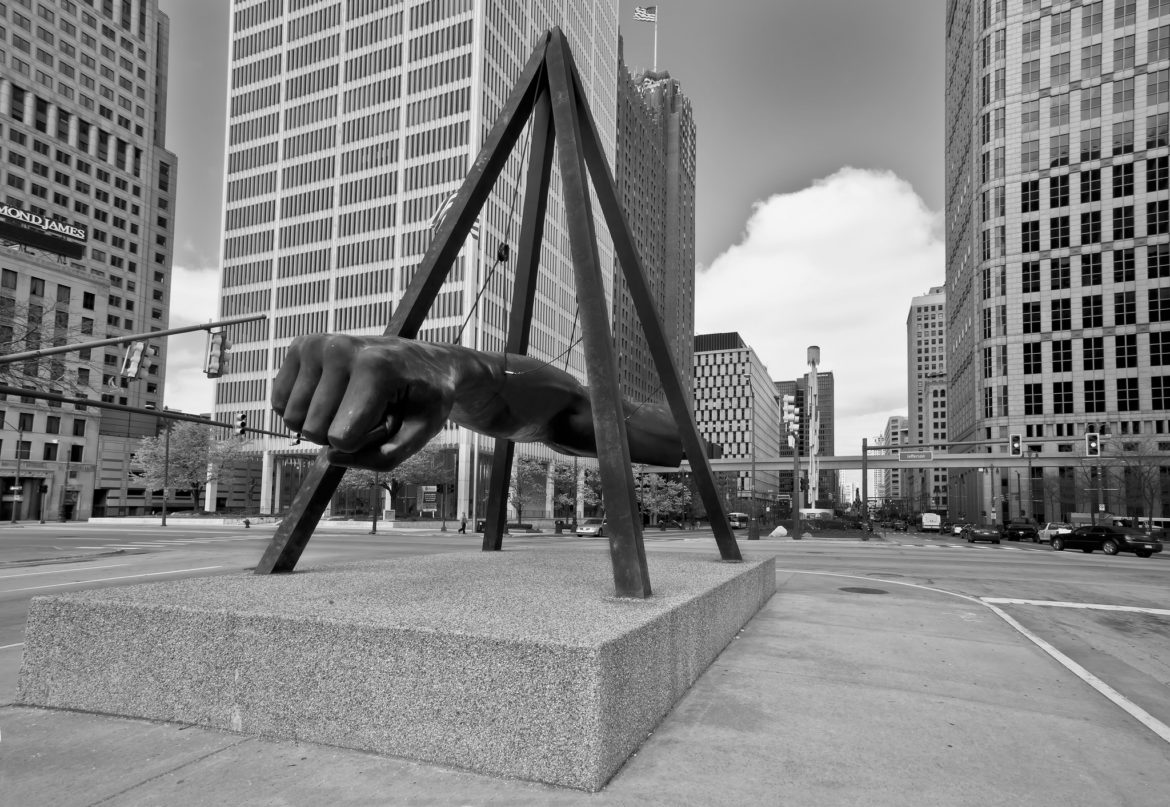 The advocacy group Detroiters Working for Environmental Justice has for years spearheaded a citywide climate change action plan, trains city residents in clean energy jobs and helps fight for tougher pollution controls on their corporate neighbors — all under the guiding principle: “From the bottom up, by force.”

“We don’t have time to wait for city government to say when we can do it. We don’t have the option of telling a child with asthma to please wait until this issue is important enough. Urban communities don’t have that option to wait, because we matter,” says Kimberly Hill Knott, the group’s director of policy.

Kimberly Hill Knott is director of policy for Detroiters Working for Environmental Justice.

Hill Knott — who has lived in Detroit for 19 years — says the intersection of climate change, clean energy and environmental justice was “really a perfect fit” for her based on relatives’ experience in a polluted Texas community and also her time on the staff of congressman and civil rights leader John Conyers.

Among other initiatives, her group is leading the Detroit Climate Action Collaborative, a diverse group of public and private entities that advocates climate change action as part of Detroit’s revitalization. Work thus far includes a greenhouse gas inventory and a soon-to-be-released citywide climate action plan.

“When they were threatening the appointment of an Emergency Manager and bankruptcy was hanging over our heads, we wondered, ‘Does it even make sense to do a climate action plan?’ There was a resounding, ‘yes,’” she said.

Most recently, Hill Knott took her group’s message to Washington, D.C., where she spoke before the Congressional Black Caucus and gave a presentation to the World Bank.

She spoke with Midwest Energy News this week about the importance of clean energy development in economically and environmentally challenged urban areas.

Midwest Energy News: What was the message you delivered recently to the World Bank?

Hill Knott: I talked about the importance of making sure we have an inclusive process as we address climate change, as adverse impacts on low-income and communities of color are even more pronounced. They are challenged because of a number of factors: the concentration of pollution, the urban heat island effect and aging infrastructure.

What I challenged the World Bank to do is use their leverage to ensure cities they represent have a seat at the table. It’s really their responsibility to leverage their influence to make sure that happens.

What has been the reaction to your climate advocacy from Detroit officials?

The response has been very good, interestingly. The city of Detroit, a while ago, understood the cost-benefit of pursuing renewable energy and energy efficiency. One thing I often say to people is when you’re dealing with businesses and government, it’s usually: If it doesn’t make money, it doesn’t make sense. They have finally come to the conclusion that it makes sense to invest in clean, renewable energy.

Now city government is looking at doing energy audits and other ways to reduce its energy footprint. We’re really excited about that, but that discussion has to go further. It can’t just stop at municipal government.

What are the key energy issues in Detroit today?

Over 70 percent of the energy mix in this area comes from coal. That provides an opportunity for us to reduce our reliance on coal by doing solar co-ops and using programs like feed-in tariffs and net metering. Not only does it reduce our reliance on coal, but it’s also an economic opportunity for residents to own energy. We’re further exploring those kinds of opportunities in Detroit. We believe the Clean Power Plan is an opening for those particular conversations.

The ongoing air pollution issues from fossil fuels in southwest Detroit has been recently compared to the water crisis in Flint. What do you believe are solutions for that area of the city?

We have got to address the issue of cumulative impact, or the concentration of toxic pollution in one area. Although one entity may be in compliance for one pollutant, if you combine all of the different facilities and look at all of them together, it really causes an undue burden or hardship on that particular community. It’s not only in Detroit, but also Michigan and throughout the country. We’ve got to look at how we strengthen or expand the Clean Air Act to address that issue.

We also need to look at the triple bottom line, which we don’t talk about enough. Corporations have a responsibility to be good corporate citizens and invest in strong pollution control measures.

And we need more of a concerted effort across all units of government that are actually mandating these facilities to reduce their pollution. That’s where our office comes in. We work to enact legislation and regulatory reform that reduces dangerous pollution.

How can Detroit’s access to renewable energy be improved?

One way is to allow for renewable energy cooperatives. We have a lot of vacant land in the city of Detroit. How about the state allow for there to be tax incentives for brownfields to be converted to solar fields?

It’s also about energy efficiency and looking at energy assistance programs being tied to energy audits. For example, what if when you applied for energy assistance, they said before they could give you money, ‘Let us come in and do an energy audit to find out why your bill is so high?’ If we’re not tying these programs together, that will further hamper any possibility of effectively addressing access to clean energy.

How else might a transition to clean energy benefit city residents?

We believe that environmental justice is not only about clean air, clean water and clean land, but it’s also about economic justice. As we transition away from dirty energy to clean energy, we want residents most impacted in these communities to have an opportunity to economically benefit.

So how do we also make sure they’re involved in the deployment of clean energy? We have a green-jobs training program to equip low-income, communities of color with the skills to enter the clean-energy and energy efficiency sectors. We desire to prove a pathway out of poverty and have access to living wage careers, which will inevitably strengthen the tax base and promote economic mobility.

Much of Detroit’s resurgence has been in the context of drawing people back into the city and generating economic activity. How do you feel efforts to drive more clean energy fit into others’ notions about the city’s revitalization?

We believe you cannot talk about the resurgence of Detroit without talking about the health and prosperity of Detroit. We believe we have an active role in helping to shape what the new and improved city of Detroit will look like. That’s making sure our areas are healthier, putting pressure on industries to make sure they are in compliance.

We are actively involved in the turnaround of this city, whether we’ve been invited or not. There’s a saying: “If you’re not at the table, you’re on the menu.” We’ve just said: “We’re not on the menu.” And if you don’t invite us to the table, we’ll pull up a folding chair.