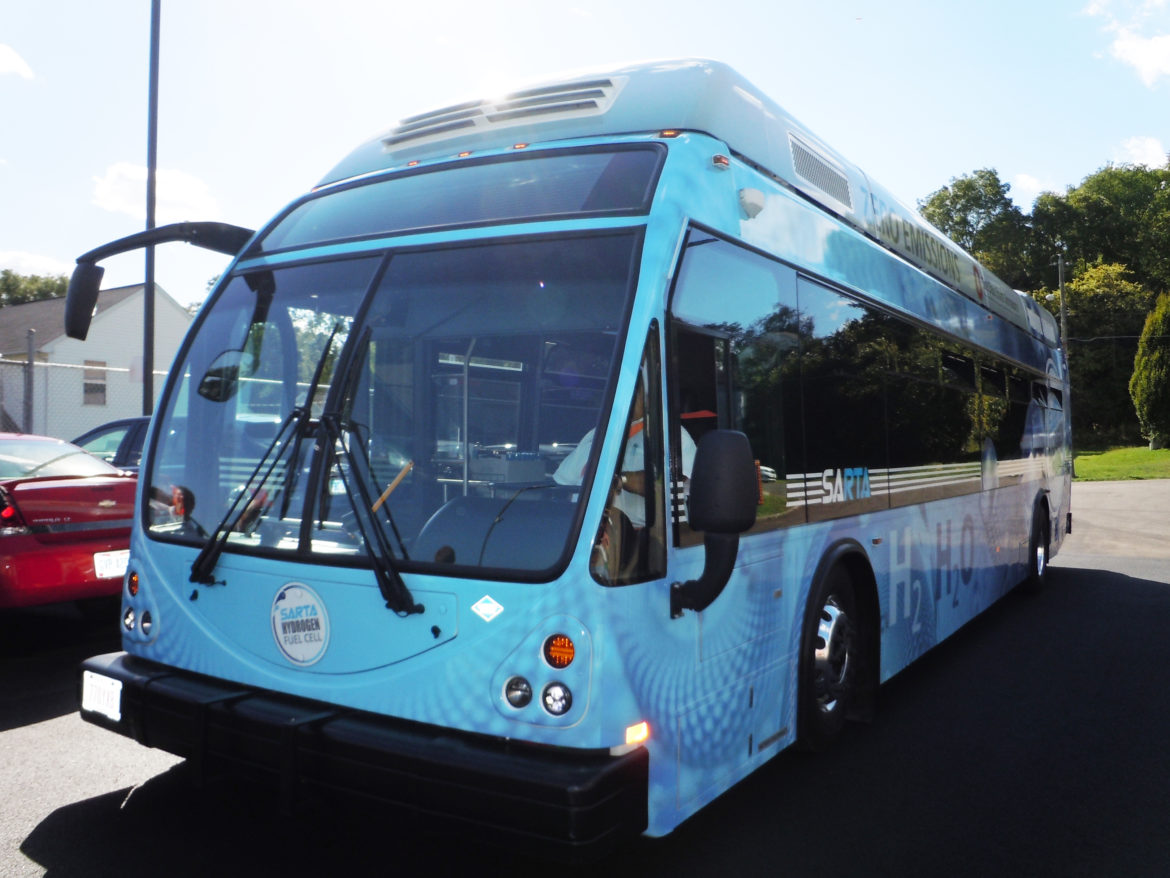 Fuel cell buses are now on the roads in Stark County, Ohio.

The Stark Area Regional Transit Authority based in Canton, Ohio rolled out the first of at least ten hydrogen fuel cell buses this week after several weeks of testing at Ohio State University. But the state already plays a big role in the fuel cell business, which could grow even more with supportive federal and state policies, according to industry insiders.

“There is not a fuel cell supplier in the United States that does not have Ohio components,” said Pat Valente of the Ohio Fuel Cell Coalition, speaking at the organization’s annual symposium in North Canton on Tuesday. The event drew speakers and attendees from both in-state and beyond.

“Ohio has already done a lot in that area, in part because there are so many companies in manufacturing,” noted Sunita Satyapal, who heads the U.S. Department of Energy’s Fuel Cell Technologies Office.

“This is a period of unprecedented cost reduction and market penetration in clean energy technology,” said Satyapal. As markets have grown, costs for some types of renewable and advanced energy have dropped by 50 percent or more since 2008, she added.

Nonetheless, challenges remain. For example, only a limited number of suppliers can deliver nozzles that are able to handle the high pressures needed for some hydrogen refueling applications, Satyapal said.

“Numerous choke points in that supply chain also have no domestic supplier,” said David Farese of Air Products and Chemicals, which provided the fueling station for the Stark County buses. “We’d love to see that domestic supply base get built up.”

Volume is another challenge. When Stark County receives all fuel cell buses on order so far, it will have the third largest fuel cell bus fleet in the United States. But many suppliers aren’t used to dealing with single- or double-digit orders, said Farese.

That can be a problem for people such as Kathy Heidebrecht of VAIREX Air Systems. The Colorado company makes high-tech air blowers for fuel cells. The blower provides air containing oxygen. A fuel cell stack combines that oxygen with hydrogen to produce electricity, heat and water.

Many VAIREX products wind up in telecommunication applications, forklifts and specialty vehicles, to name a few. But Heidebrecht had trouble getting companies to provide parts when one client wanted a blower that was bigger than those that the company typically made, she said.

“As we all start out, it’s low volumes,” said Keith Schmid of Plug Power, based in Latham, New York. Moving to a higher volume “drives cost reduction in the supply chain, and it also drives innovation, because everyone is trying to compete.”

A higher volume also gives companies the chance to improve their own operations. “We moved from one-off design to standardizing the design” for Plug Power’s fueling equipment, Schmid said. “We moved from guild-built to factory assembly.”

Those moves have shortened the time between a customer’s order and the time it can start dispensing hydrogen to as little as 16 weeks, he said.

Infrastructure is an ongoing challenge, especially for mobile applications such as automobiles. Honda and Toyota both make fuel cell passenger vehicles. The cars can go up to 300 miles from a fill-up that takes minutes. However, none of the cars are sold in Ohio because a public fueling network doesn’t exist in the state yet.

Meanwhile, people are driving the vehicles in California, thanks in part to a commitment from the state to help build fueling stations. States in the Northeast are working to set up a similar network.

Expanding vehicle adoption and infrastructure is not just a question about the chicken or the egg. “It’s really a three-legged stool,” said David Edwards of Air Liquide, which has an office in Independence, Ohio. “You have to include hydrogen production in that.”

Currently, most hydrogen used in fuel cells comes from reforming natural gas. The process does produce some carbon dioxide emissions. However, it can still provide environmental benefits over running a vehicle directly on natural gas because the potential exists to capture carbon dioxide at a stationery reformer.

But carbon capture is rarely done so far, Edwards noted. As markets for passenger vehicles expand, however, the demand will likely grow for hydrogen from sustainable sources.

“Our future is blue or green production pathways,” Edwards said. His company is committed to producing at least half its hydrogen without carbon dioxide emissions by 2020.

The “greenest way to make hydrogen today is by replacing the natural gas” with biogas, Edwards noted. Other options include electrolysis from solar or wind energy or from combined heat and power operations.

Public policy also plays an important part in industry growth. Other countries are providing substantial support for their own fuel cell industries, which compete with the United States’ industry, noted Patrick Fullenkamp at GLWN in Cleveland, Ohio. He served as principal investigator for the Department of Energy on a competitiveness survey on the hydrogen and fuel cell industry.

“Japan has national support for the markets, and there is a level of certainty there,” Fullenkamp said. South Korea, China, Germany and other European countries are also showing support, he noted.

Satyapan’s office at the Department of Energy provides substantial support and funding for research and development work. The agency continues to offer multiple funding opportunities for businesses across the U.S.

And while Congress extended tax credits for solar and wind energy last December: “Unfortunately, fuel cells were not included,” Valente said. “Because of the growth potential in the state, we want to insure that the federal tax credit is renewed.”

State policy also makes a difference, said Ted Ford of Ohio Advanced Energy Economy, who attended the conference. Ohio energy policy remains unsettled with a freeze on clean energy standards in place through the end of this year, and some lawmakers hope to change statutory requirements into goals that wouldn’t be enforced until at least 2020.

“Fuel cells are kind of at their breakout moment,” Ford said, noting that the technology could become “a major source of electricity for microgrids [and] for a whole variety of things in the very near future.”

As he sees it, policy can play a big part in whether more of the fuel cell business and the companies that will depend on it come to Ohio or head elsewhere.

“Ohio needs to look like a place where you can come and do business on your own terms, and energy is one of the big factors that determines where people go,” Ford said.