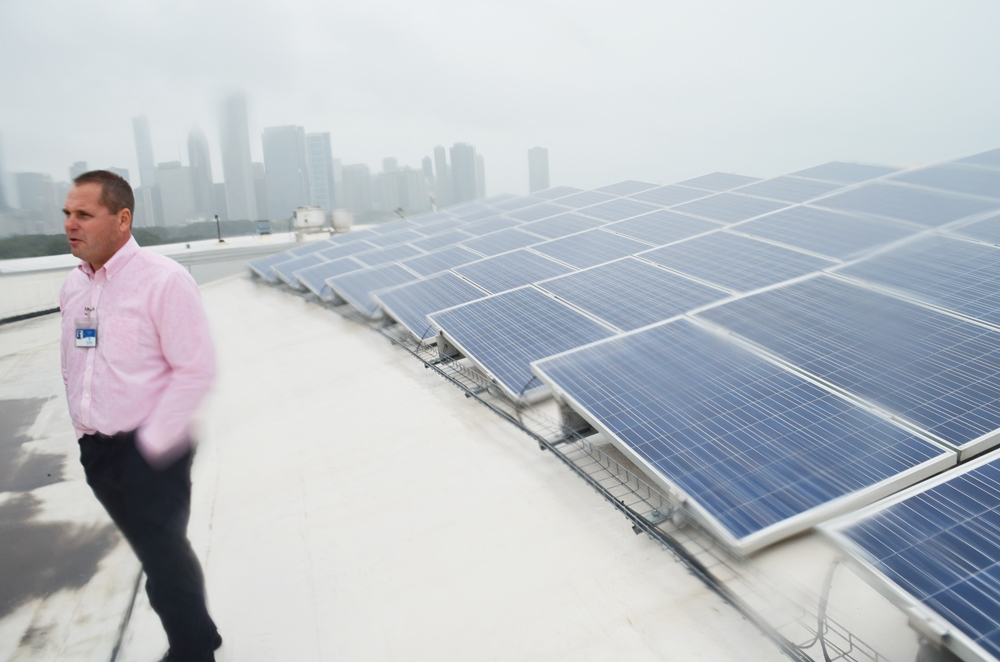 Bob Wengel, VP of operations at Shedd Aquarium, explains how a new battery installation will augment the facility's solar array.

Chicago’s Shedd Aquarium is known for its work to exhibit and conserve the complexity of Earth’s aquatic ecosystems. But in the coming weeks, the civic institution will find itself an extension of another complex – albeit very manmade – system: the 21st-Century electric grid.

In June, Shedd installed a 60,000-pound, $2 million battery as part of the aquarium’s plan to cut energy consumption in half by 2020. Like all energy-storage systems, Shedd’s battery will provide valuable backup power and help meet peak demand for the aquarium.

But the 1 megawatt, lithium-ion system will also play a broader role in the way electricity supply and demand is balanced across the region. Once its battery comes online, Shedd will be able to sell stored power into electricity markets run by PJM Interconnection, the regional transmission organization that manages electricity production and flow across 13 states and the District of Columbia.

The battery was funded by a grant from the Illinois Department of Commerce & Economic Opportunity and installed by Schneider Electric. Bob Wengel, vice president of facilities at Shedd, says the battery should be ready for operation by the end of October.

At that point, Shedd will essentially straddle the divide between power consumer and power producer, a divide that has long defined the existing power grid.

“If you go back 30 years, the grid was a one-way street,” Wengel told Midwest Energy News during a recent visit to tour the aquarium’s energy system on a blustery, wet day. The rise of wind and solar power help reduce the strain on natural resources, but they also make traffic on the grid more complicated.

Grid operators like PJM have to make sure power flows are consistent and stable despite the rise in variable energy sources like wind and sun. Typically, that spare capacity is ensured by keeping fossil fuel plants running in case of a sudden change in supply or demand.

Batteries, like the one being installed at Shedd, offer a cleaner alternative for managing the grid.

“If you had enough batteries out doing this … you could shut down those plants,” Wengel said. “Now think of the natural resources you save.”

Of course, Shedd is not the first to embrace the title of “prosumer,” as producer-consumers are sometimes called in the energy industry. Nor will it be the last. Most households with rooftop solar are themselves extensions of the grid, both producing power and demanding it. Analysts expect the grid of tomorrow to consist largely of these kinds of distributed networks of prosumers sending energy back and forth to one another.

But for Shedd – home to 32,000 aquatic animals – the impetus for helping to usher in a smarter, more decentralized grid hits particularly close to home.

“If we could save the CO2 emissions from power plants, and we can save the water resources, we’re starting to protect the habitat that our animals live in,” Wengel said. “There’s a huge relationship there for us.”

In 2013, Shedd partnered with the City of Chicago, the Illinois Science and Technology Coalition and other groups to put together a Master Energy Roadmap that would guide the aquarium toward reducing its energy use by nearly 10 million kilowatt-hours (kWh) per year. The average Illinois household consumes about 8,940 kWh per year, according to the U.S. Energy Information Administration. That means Shedd would save enough energy each year to power around 1,100 Illinois households.

“The collaboration is an exceptional example of how organizations across public and private sectors can work together to find innovative ways to make our civic institutions use energy smarter, cleaner and more efficiently,” Chicago Mayor Rahm Emanuel said in a press release at the time.

Since then, Shedd has installed 913 solar panels with a capacity of 265 kilowatts on the roof of its Abbott Oceanarium and some 1,000 efficient LED lights throughout its facility on Chicago’s lakefront. The battery aims to complement the existing energy system by offering backup power for critical systems and an additional source of revenue in the form of selling power back onto the grid. Later on, it may be used for grid-scale demand response or to help meet the aquarium’s peak demand locally, Wengel said.

The battery and solar systems are relatively small in comparison to the aquarium’s overall energy use. The solar panels generate between 300,000 to 400,000 kWh a year. That’s a drop in the bucket compared to the 1.2 million to 1.6 million kWh Shedd consumes in just an average month.

But the southwest facing panels make up for limited capacity with good timing. By catching the late-afternoon sun, the panels are able to provide an extra boost when it is needed most – between 3 p.m. and 6 p.m. when energy demand is highest.

Behind the scenes at Shedd, in a small windowless room out of sight from the stingrays, penguins, turtles and other creatures, is the brain behind the aquarium’s advanced energy system. Seven computer monitors display real-time data about the building’s overall energy consumption, the status of various pumps, water heaters and other equipment, local weather conditions and the flow of power from the rooftop solar panels.

In the first month of using the system, Shedd was able to reduce its consumption by 50,000 kWh, Wengel said.

It’s an elaborate setup for an institution whose primary focus is water, not energy. But the two are deeply linked, as power plants require water for cooling and large amounts of energy are required to pump, treat and heat water for consumers.

In its pursuit of sustainability, it would have been easier for Shedd to purchase renewable energy credits that offset carbon-heavy generation from fossil fuel plants. But instead the institution spent years researching, planning, partnering and ultimately building its own unique energy system.

For Wengel, doing the legwork, the “soul searching” and the hosting of a physical system onsite is core to Shedd’s educational mission.

“We’re going to educate people about the battery,” Wengel said of the system. “We’re also going to relate it in a way that [says], ‘Someday you’re going to have a battery in your house.’”