Photo By
American Council for an Energy-Efficiency Economy 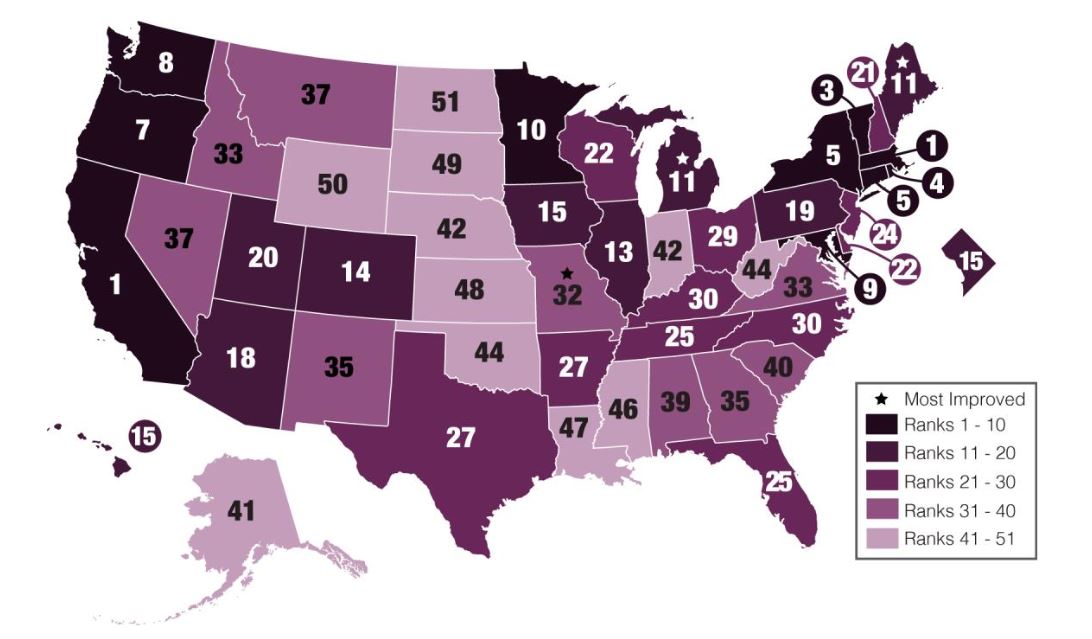 American Council for an Energy-Efficiency Economy

While the political landscape in Midwest states shows a growing reluctance to mandate utility spending on energy efficiency, some states are still gaining ground in reducing energy use by approaching it from different sectors.

The American Council for an Energy Efficient Economy’s latest energy efficiency scorecard — a national grading system of states with the strongest efficiency policies in place — shows the Midwest region all over the map, from states in the top 10 (Minnesota) to dead last (North Dakota).

But advocates say the evolving criteria for grades mean more efforts are being taken into account beyond traditional statewide efficiency standards requiring utility investments. While states like Minnesota are still seen as having strong, years-long efforts, others are increasingly recognized for efforts in sectors like combined heat and power, transportation and building codes.

“The scorecard is always an evolving document,” said Stacey Paradis, executive director of the Midwest Energy Efficiency Alliance. “The (ACEEE) has a lot of points set up to particularly favor mandated standards, but the nice thing about this year is they also did recognize states that aren’t in a mandate environment but are increasing their investment in efficiency.”

Missouri, for example, is recognized for having the “most dramatic improvement” among states this year, moving up 12 rankings, despite relying on voluntary goals rather than a dedicated energy efficiency resource standard.

“In addition, efforts to strengthen energy efficiency are a cornerstone of Missouri’s recently released 2015 Comprehensive State Energy Plan, which lays out a roadmap to continue to build upon the state’s success,” the report says.

Moving away from mandates

Despite the distance on the scorecard between Indiana (42), Ohio (29) and Michigan (11), each has shown how state politics are driving policies away from clean energy mandates. For Plains states, standards have generally remained off the table.

Indiana — for a variety off reasons — eliminated its efficiency standard in 2014; Ohio’s has been on hold since 2014, though Gov. John Kasich has threatened to veto any plan to eliminate it.

In Michigan, lawmakers for over a year have drawn up proposals that would make efficiency spending part of an Integrated Resource Plan. Gov. Rick Snyder’s administration, however, simply wants to see efficiency play a major role in its plan to cut emissions.

Paradis said a “big clip” of states that adopted standards between 2007 and 2010. The Republican wave election of 2010 — which included conservatives regaining the governor’s office in Ohio, Michigan and Wisconsin — marked a turning point, advocates say.

“We have had a lot of political change since then — a lot of new governors and, in particular, a change in state legislatures with the rise of the tea party. Generally speaking, it’s not opposition to energy efficiency, just mandates of any kind. It has made the environment less hospitable to those policies,” Paradis said.

But state regulators can still intervene and decide on cost recovery mechanisms and other incentives to encourage investing, a criteria that’s included in the ACEEE scorecard.

“There is more talk that way,” Paradis said. “We recognize the political environment in the Midwest.”

“Indiana is a real good example of states that have taken a significant step backward in the past couple of years,” said Martin Kushler, a senior fellow for ACEEE who is based in Michigan. “They are probably the most noteworthy in the Midwest and their experience is very instructive.”

Kushler added that Ohio is in a “somewhat similar situation” by freezing its clean energy standards.

“States with an EERS policy in place have shown average energy efficiency spending and savings levels more than three times as high as states without an EERS policy,” the report says.

Paradis added: “There is just not as much certainty when you don’t have a mandate in place.”

In Michigan, Kushler and the Snyder administration have advocated for eliminating the 1 percent spending cap as part of the electric efficiency standard.

“It restrains the ability to save much more than the standard requires,” Kushler said. “It makes no sense to cap spending on the least expensive” form of energy.

Additionally, Michigan lawmakers are considering extending decoupling mechanisms and other financial incentives for utilities that invest more in efficiency.

Other ways of investing

States are also credited in the ACEEE scorecard for policies related to transportation, building codes, combined heat and power, and appliance and equipment standards.

While the top-ranking states pursuing these sectors are generally on the East and West coasts, Paradis said they are a growing trend in the Midwest.

Missouri, Illinois and Michigan — which has moved up 22 spots since its 2007 ranking — were each recognized for a greater focus on efficiency requirements in building codes.

Combined heat and power, or CHP, is another sector considered in the ACEEE scorecard.

“While CHP is known for its energy efficiency benefits, few states actively identify it as an energy resource akin to more traditional sources such as centralized power plants,” the report says.

Minnesota and Illinois ranked highest in the Midwest for CHP-friendly policies, which include interconnection and recognition within the overall efficiency standard. Paradis says converting to CHP as a power source, though, comes with a caveat.

“The issue that comes up with CHP is that some consider it fuel-switching to natural gas, which is a big issue,” she said. “We leave it to regulatory bodies to determine what the function of CHP is and follow their lead.”

Rounding out the Midwest and the ACEEE scorecard as a whole are the Dakotas and Kansas, which have stayed at the bottom of the pack for years.

Those states gained a few points on the scorecard related to transportation, building codes, CHP and state government-led initiatives.

At this point, though, advocates see those states more as educational opportunities for policymakers on “what’s doable” and perhaps starting with pilot programs absent efficiency standards, Paradis said.

“Overall, we’re happy. There’s always work to be done in the Midwest. There are some great models of things happening here that rival things on the coast,” Paradis said, referring to programs in Illinois, Minnesota and Iowa. “We just need to keep working to spread to the rest of the states.”