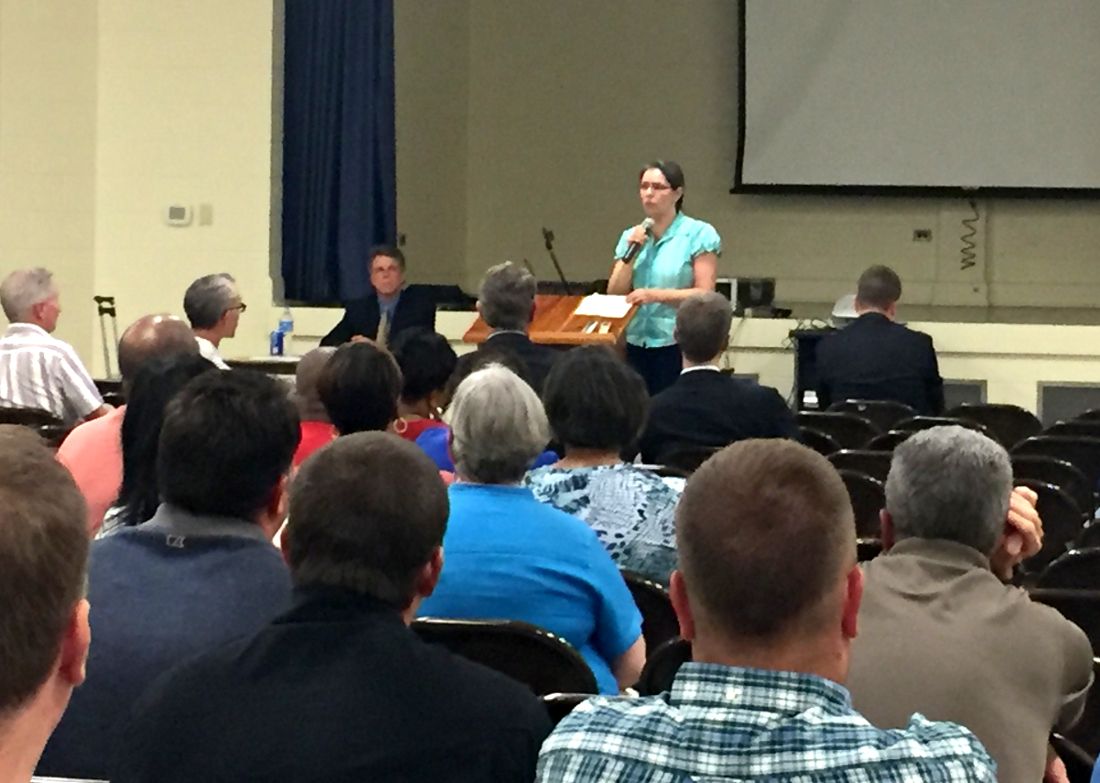 ROXBORO, N.C. — The McCrory administration’s proposal to allow increased water pollution from two Duke Energy coal ash dumps was met with indignation at a public hearing here last Tuesday – with nearly all of the more than twenty speakers voicing objection.

“It is obvious that [the North Carolina Department of Environmental Quality] is not taking adequate responsibility for protecting our water,” testified Rosemary Sawdon of nearby Rougemont. “It appears that instead the Department is protecting Duke Energy.”

Comments like these were a common refrain, drawing cheers and applause from the crowd of nearly 100 in the small town of Roxboro, the Person County seat about 30 miles north of Durham.

Residents criticized the Mayo and Roxboro coal ash proposals for allowing Duke to release more mercury, arsenic and other toxins into Hyco and Mayo lakes, popular recreation spots; and for sanctioning seeps of coal ash into a nearby stream for the first time.

With draft permits already released that would authorize leaks at ash dumps in Cleveland County and Lumberton, and a permit proposal for another coal ash pit expected today, environmental advocates fear the plans DEQ aired in Roxboro are part of a growing trend.

At issue are Duke Energy’s permits under the federal Clean Water Act’s National Pollutant Discharge Elimination System. The NPDES permits, administered by DEQ and required every five years for a range of industrial facilities, allow toxic releases into waterways up to certain limits.

NPDES permit renewals don’t typically incite much passion. But this community is on alert when it comes to coal ash – the toxic byproduct of coal-fired power production that is mixed with water and stored in unlined pits here and across the state.

A section of the Dan River, 70 miles of which was coated in ash after a pipe burst in 2014, flows less than 20 miles from here, on the other side of Hyco Lake.

“I can’t believe we’re here two years after the Dan River disaster,” said John Friedrich, who came to the hearing after swimming in a nearby waterway.

Many residents in this area were among the 369 well owners statewide who received “do not drink” notices after officials found their water contained unsafe levels of hexavalent chromium, a likely carcinogen present in ash. Over the objections of the state’s toxicologist, the letters were later rescinded, but Duke continues to supply bottled water to residents.

“If there’s nothing wrong with the water, why are you delivering [bottled] water to us?” asked Tatjana Adams of Roxboro.

The question was rhetorical, since several Duke workers attended but did not speak publicly at the hearing. And while two men, not employees, testified in defense of the company and its contributions to the community’s tax base and charities, many speakers expressed a general distrust of the utility.

“Duke Energy has no credibility with most people,” proclaimed Pattie Harrison, who lives near the Roxboro plant. “I don’t trust them to handle anything that has to do with my drinking water.”

A burst of pollution

Duke Energy, state officials, scientists and environmental advocates are at odds over whether all 14 of the state’s coal ash dumps should be excavated and the ash moved away from water supplies. But everyone agrees on the first step of coal ash mitigation: draining the coal ash pits of water.

“The overarching goal is closing all of the coal ash ponds across the state,” said Bridget Munger, a spokeswoman from DEQ, “and allowing [Duke] to dewater the ponds safely.”

The proposed NPDES permits reflect the expectation that flushing the ponds will cause a burst of pollution into waterways that will exceed current limits. Environmental advocates acknowledge this reality, but say it doesn’t justify DEQ’s proposal, which is to allow Duke to release unlimited amounts of mercury, lead, thallium and other contaminants into Hyco and Mayo Lakes during the dewatering phase.

“There are going to have to be permits to flush the contents out,” said Frank Holleman, senior attorney with the Southern Environmental Law Center. “But we need protection from these pollutants.”

Holleman and his colleague pointed to NPDES permits for the Sutton site near Wilmington and the Riverbend plant near Charlotte to show that the Roxboro and Mayo permits are too lenient.

“There are permits now that contain technology-based limits that are enforceable on day one,” said Nick Torrey, another attorney with the Southern Environmental Law Center. “The same technology should be used to protect this community.”

‘They need to be cleaned up and prevented’

In addition to being discharged directly from pipes, coal ash pollution can also leak into groundwater and streams. These seeps are not legally permitted, but they are widely acknowledged.

The draft Mayo permit allows seeps into Crutchfield Branch near Mayo Lake, granting a request on seeps Duke has been making for years.

“Removing water and closing ash basins is the best way to address seeps,” said Erin Culbert, a spokeswoman for Duke Energy, “in the meantime, we applied to have those explicitly noted in our permits so the state has oversight on how we’re addressing and monitoring them.”

But environmental groups, many of whom are currently suing Duke for violations including seeps from its Mayo site, say the leaks should be eliminated, not simply regulated.

“We strongly object to the permitting of previously unpermitted seeps,” said Hope Taylor of Clean Water for North Carolina. Instead, she said, “they need to be… cleaned up and prevented.”

Advocates say seeps pose a particular problem for the state’s six coal ash sites that could be drained but not excavated, since ash dumps are typically located in or near groundwater and buried streams.

“There’s definitely a heightened concern because the coal ash could stay there in perpetuity,” said Dave Rogers with the Sierra Club’s Beyond Coal Campaign. “Even after they drain them, even after they cap them in place, there’s still the risk of ongoing pollution.”

Duke has already confirmed it plans to leave the ash at the site that straddles Cleveland and Rutherford Counties, where permitted seeps are proposed. The company says it is still developing plans for Roxboro and Mayo, and Person County residents are wary.

“I have a concern about this cap in place,” testified Lisa Houston at the Roxboro hearing. “If that ash is not removed, my well will be contaminated again.”

In recent months, the McCrory administration has already drafted or finalized seven NPDES permits, and plans to issue its proposal for the Belews Creek site near Winston-Salem today.

Of these, at least four propose legalizing seeps into streams and groundwater; at least four would allow an unlimited flush of pollutants during the dewatering phase.

DEQ plans to finalize its proposals by the end of the year, but emphasizes that permits still in the draft phase are exactly that.

“We really want to hear from people all their thoughts, and the more technical the better,” DEQ’s Munger said.

Holleman of the Southern Environmental Law Center said DEQ deserved credit for revising its Sutton and Riverbend permits after extensive public input, and hoped they would do the same for Roxboro and Mayo.

“This battle is not over, and the people are not taking it lying down,” he said.

While that may be, some are beginning to resent the fight.

“Why is it on our backs?” said Adams, one of the Roxboro residents at last week’s hearing. “I feel like it’s a real outrage that I have to keep showing up.”

Editor’s note: This story has been updated to correct a misspelling of Tatjana Adams’ first name.