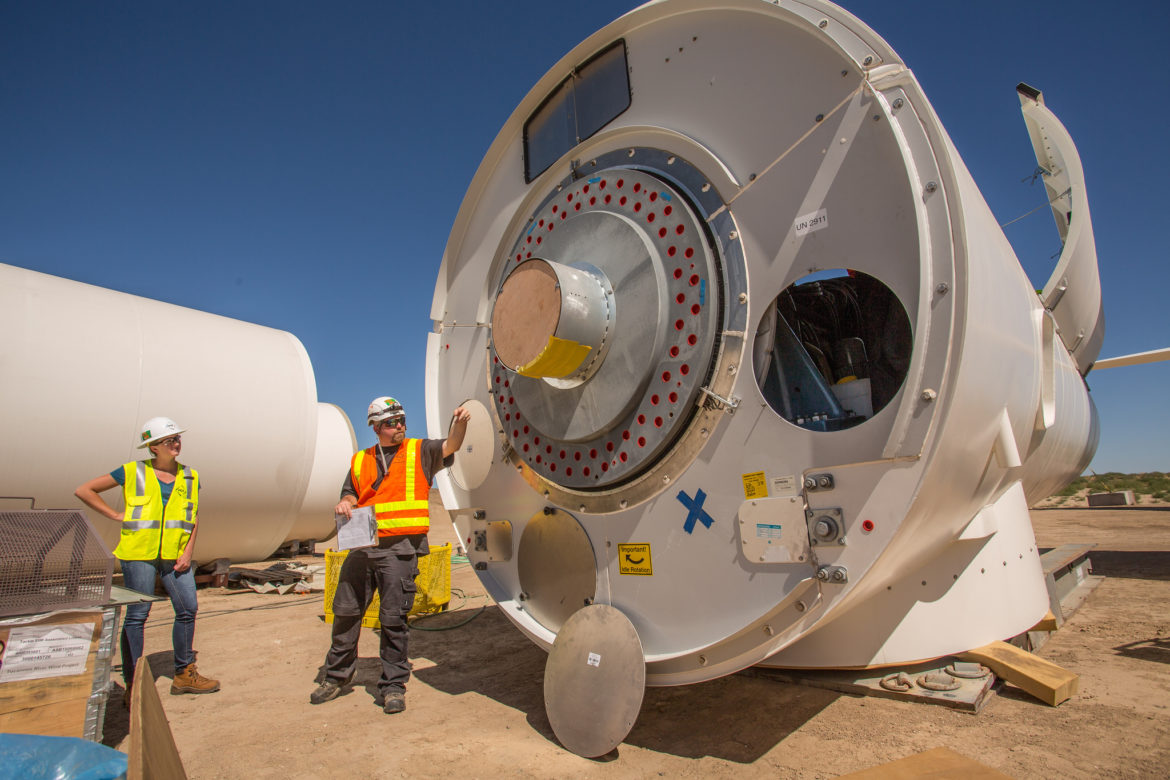 More than half of new wind capacity in 2015 was contracted through power purchase agreements, according to AWEA.

As large corporations increasingly demand 100 percent renewable energy, many utilities are left in a bind: Add to their already excess capacity, or they can risk losing new customers to lower-priced third-party agreements.

“We have to figure out how to thread the needle with utilities,” said Letha Tawney who, as the director for utility innovation at the World Resources Institute, spends many of her waking and working hours trying to guide utilities into a new energy paradigm.

Many large power consumers have clearly demonstrated that, with or without their local utilities, they are moving towards a renewable future. That message was reiterated recently in Nevada when MGM Resorts International and Wynn Resorts paid a hefty upfront fee to Nevada Power to stop purchasing power from the utility and start buying it from other sources.

As of September, 62 of the country’s largest corporations had indicated their energy priorities by endorsing the Corporate Renewable Energy Buyers Principles. Other large institutions such as universities and military bases are moving in that direction as well.

Adam Kramer, the executive vice-president of strategy for Switch, a “transformational technology idea engine,” reflected on the company’s thinking in choosing Michigan for a new facility.

States are eager to meet these companies’ demands, seeking the economic development prizes that follow.

“If we just think about large IT companies and the next big data center, access to 100 percent renewable energy for many of them is a requirement,” said Ryan Hodum, vice president of David Gardiner & Associates, a clean-energy adviser to businesses. “So a state that doesn’t provide that is at a competitive disadvantage.”

In April, the American Wind Energy Association released a report with a telling finding: in 2015, for the first time ever, “major brands and other emerging non-utility customers signed 52 percent, or 2,074 megawatts, of the wind power capacity contracted through power-purchase agreements.”

“We have seen the number of corporate power-purchase agreements double year-on-year for five years straight,” Hodum said. “We expect that to continue – I don’t know if it will be at quite that pace. We think this is absolutely the type of mechanism that large companies are looking for, especially for some of these large off-site projects.”

That’s not to say that large power customers that want renewable power don’t wish to play ball with their local utility. According to Hodum, they do.

Rather, the escalating number of PPAs between large electricity customers and, in most cases, wind farms, suggests to Hodum that utilities aren’t acting fast enough. Large customers “have set these public commitments with targets for 2020, 2025,” he said. “There’s an urgency.”

At least 26 states – including Illinois, Iowa, Michigan and Ohio – allow electricity customers to obtain power from an entity other than their local utility through a power-purchase agreement. Some other states are attempting to join that list. A bill legalizing PPAs was introduced in the Missouri General Assembly each of the past two years. It got a bit more traction in 2016 than it did in 2015.

“There was corporate buy-in this year,” said P.J. Wilson, the executive director of Renew Missouri, a non-profit that supports legalizing power-purchase agreements. “These companies were saying, ‘We want and need access to renewable energy.’ ”

Some utilities have responded to this demand with “green tariffs.” Utilities either purchase or invest in generating renewable energy, then offer it at a different – often higher – price to customers that want green energy.

“We’ve seen 10 utilities offer 11 different green-tariff products,” Tawney said. “Not all are successful yet, but they are all experiments. There’s a particularly interesting one: Rocky Mountain Power in Utah has put forward a product that would let a customer access a PPA while still a customer of Rocky Mountain Power.”

In 2012, the Utah legislature approved a mechanism that allows large customers to purchase renewable power from a third party, but to continue to pay Rocky Mountain Power for non-generation services such as transmission, distribution and billing.

The arrangement is available to customers with a demand of at least 5,000 kilowatts, according to a utility spokesman. It works well for them, he said, because their bills already are broken down to reflect the cost of each component of electrical service.

A few months ago, Dominion Virginia Power and an affiliate of Amazon crafted a system that allows the Amazon affiliate, Vadata, to sign power-purchase agreements with renewable generators while paying a price to Dominion that reflects the changing cost of power in the wholesale market.

These sorts of arrangements come with their own rate, or tariff, which typically has been higher than the utility’s going rate, according to Mark Lawlor, director of development at Clean Line Energy Partners.

Clean Line is trying to develop two long-distance transmission lines that would move wind energy from the Midwest toward the east. He would like to sell some of the wind power that would move across Missouri on the proposed Grain Belt Express to Ameren, one of the major utilities serving the state.

However, as he pointed out, it’s tough for utilities acting as intermediaries with their green tariffs to compete with power contracts made between power consumers and, in most cases, wind farms that are selling power at low prices.

“It seems to be this real challenge for utilities.”

In the short term, investment in renewable energy amounts to excess generation capacity for most utilities, Tawney conceded. However, she said, time will change the picture, especially in states that use a lot of coal, as do many Midwestern states.

“I think the states are realizing that simplifying cost-effective access to renewable energy is a more-and-more important economic driver” she said. “When more than 70 percent of Fortune 100 companies have set (sustainable energy) goals, it’s not an odd, one-off situation anymore. States that don’t do it will face economic-development headwinds. It’s too mainstream now.”