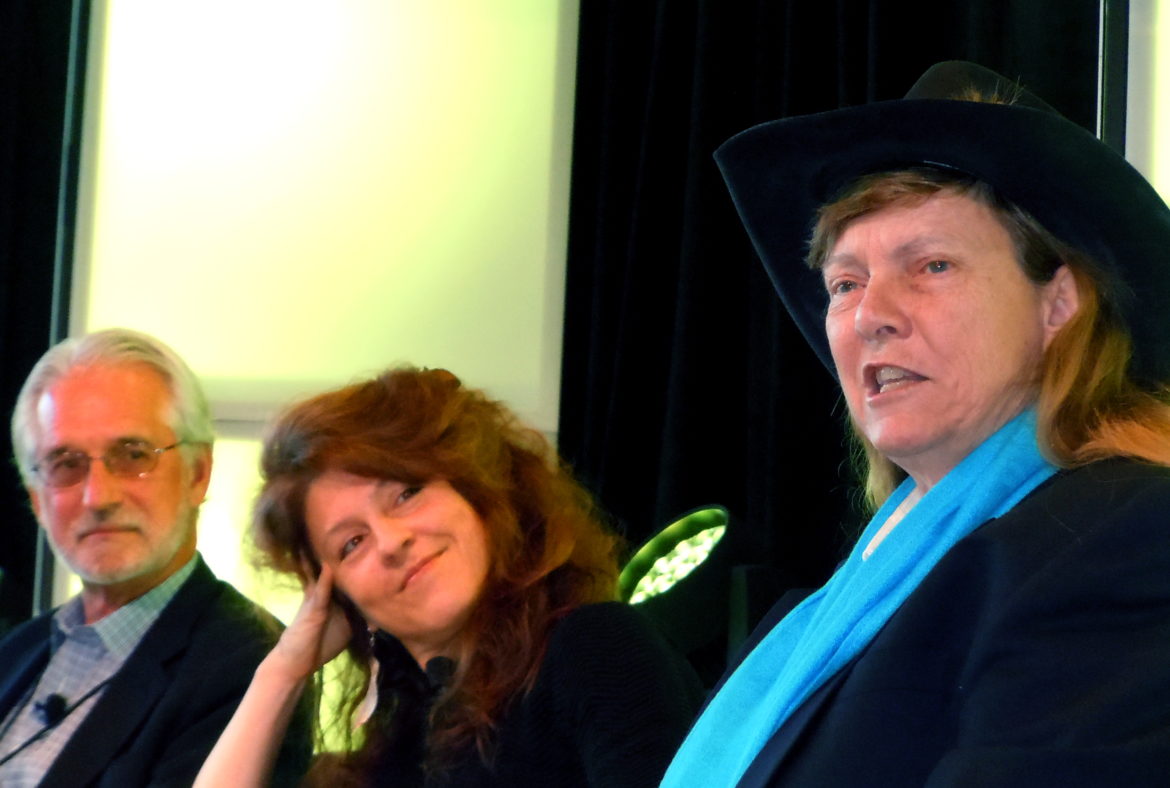 Hunter Lovins of Natural Capitalism Solutions (far right) shares ideas during a panel at last week’s “After Fossil Fuels” conference as Michelle Long of BALLE and Ted Howard of the Democracy Collaborative listen.

As political discussions in the U.S. focus on the future of fossil fuel industries, an event in Ohio last week explored a future with no fossil fuels at all.

“After Fossil Fuels: The Next Economy,” sponsored by Oberlin College and the Oberlin Project, brought together an international group of speakers to explore the implications of a transition away from coal, oil and natural gas.

Some suggested that the move would lead to less globalization and less growth. Others countered that smart choices could shape an economy that would preserve benefits of the current system while providing more sustainable prosperity overall.

Without a shift to clean energy, speakers warned, the country and the world face consequences from climate change, including increased disease, destruction of critical infrastructure, greater social unrest and more widespread poverty.

“Climate change is a massive truck rolling down the hill at our children and our grandchildren,” stressed Mindy Lubber, a former regional administrator for the U.S. Environmental Protection Agency and current president of Ceres, a Boston-based organization that advises on sustainability investments.

The economy will shift away from fossil fuels anyway, speakers said, due to declining profitability in the face of competition.

“If all you are is a profit-maximizing capitalist, you would do exactly what you’d do if you were scared to death of climate change,” said Hunter Lovins, president of Natural Capitalism Solutions in Longmont, Colorado. The nonprofit organization provides education and training on sustainability issues and projects.

“The capital cost of punching holes in the ground to get more gas, more oil [or] more coal, is very close to exceeding the value of that resource that you get out,” explained Lovins. “This has nothing to do with global warming.”

As examples, Lovins cited new solar projects in Chile and Dubai that will produce electricity for less than 3 cents per kilowatt/hour, versus up to 8 cents per kw/h for electricity from natural gas or coal.

Coal reserves are getting progressively more expensive to mine, noted Richard Heinberg, a fellow with the Post Carbon Institute in Santa Rosa, California. Unconventional petroleum resources are also expensive to extract and have been profitable only because interest rates have been kept low, he added.

“Exxon could well go broke, very shortly — again for fundamental economic reasons,” Lovins said. That company’s failure to write down some of its assets has recently made it the target of an investigation by the Securities and Exchange Commission.

Some lawmakers, such as Florida Rep. Bill Posey, want to change the law to keep the SEC from looking into disclosures of climate change risks. But the agency’s job “is to mandate the disclosure of material financial risk,” Lubber said. In her view, that includes risks posed by climate change and other factors.

And while many organizations are divesting from fossil fuels because of political or moral reasons, Lubber said, business judgment makes that a sound move as well.

“Smart money today says keep your money out of fossil fuels,” she stressed.

Investing in fossil fuels will be even less wise if governments actually take action to keep global warming to 2ºC, warned Mark Campanale of the Carbon Tracker Initiative, based in London, United Kingdom. “We’re coming to a point where we’ve got to get to rapid decarbonization,” Campanale explained. “We’ve got a big, big job to do.”

Yet progress toward that goal would lead to a “carbon bubble” of unburnable assets, Campanale said. Petroleum resources may be particularly vulnerable, he noted.

“If you can’t get coal down, then there really is no budget left for these other fossil fuels,” Campanale noted. “The oil companies are actually quite happy that Peabody [Coal] went into bankruptcy, because they think that they’ve got more time left. But have they?”

What kind of future?

Moving away from fossil fuels might demand an economic system that does not focus on continuous growth, suggested Robert Costanza of Australian National University in Canberra.

“We are in a very real sense addicted to our current growth-at-all-costs economic paradigm, from fossil fuels to overconsumption,” Costanza said.

In his view, that mindset stems partly from a focus centered on a country’s gross domestic product, rather than the overall prosperity of all its people.

“It’s [also about] getting very positive short-term rewards from something that has negative long-term consequences,” Costanza said. “We’re not seeing those long term consequences adequately enough to change our behavior.”

Moving away from fossil fuels will almost necessarily force other changes, suggested Heinberg.

“Energy is at the heart of everything,” he explained. “Without energy nothing happens.”

So, unless and until air transport can move to renewable hydrogen fuel cells or other another form of clean energy, globalization will decrease, Heinberg suggested. “Globalization in the final analysis depends upon cheap transport fuel.”

An end to fossil fuels would also cause fundamental changes in buildings and other infrastructure, Heinberg said, because of coal’s role in producing steel, concrete and other materials.

“We have to transition away from construction in its current form using concrete and steel,” Heinberg said. That would mean “using more natural materials, more local materials and enclosing less space per person, particularly in countries like the United States.”

“We live in a critical era,” agreed John Fullerton, president of the Capital Institute, a financial think tank based in Greenwich, Connecticut. As he sees it, issues dealing with energy and the financial system are “all linked together” with problems such as climate change adaptation and the current refugee crisis.

But, Fullerton notes, “I have a more hopeful belief.”

“Financial capital has sort of been piled up in bigger and bigger pools,” he explained. “Because it sits in such large pools, it can’t find its way into the real economy anymore.”

But, Fullerton continued, if policy makers can find a way to “unclog the dike,” capital will flow into “new pockets, where it can be put into productive use.” That move could also help reduce income inequality, especially for people who live in poverty, he noted.

Lovins had an even more optimistic view.

“I am not asking you to give up your way of life — expressly not,” she stressed. “You can have the life that you cherish — better, cheaper — by transitioning in an intelligent way away from coal, which is going bankrupt for fundamental economic reasons.”

Just as society embraced mobile smartphones over anchored landlines, Lovins said, people will move away from fossil fuels to solar energy, wind power and other forms of clean energy. “They give us a higher quality of life, and they cost less.”

“This is not going to be the era of ‘Oh, we’re all going to die and freeze in the dark on our way to it,’” Lovins added. “We are going to unleash a finer future. We’re just going to use different technologies.”