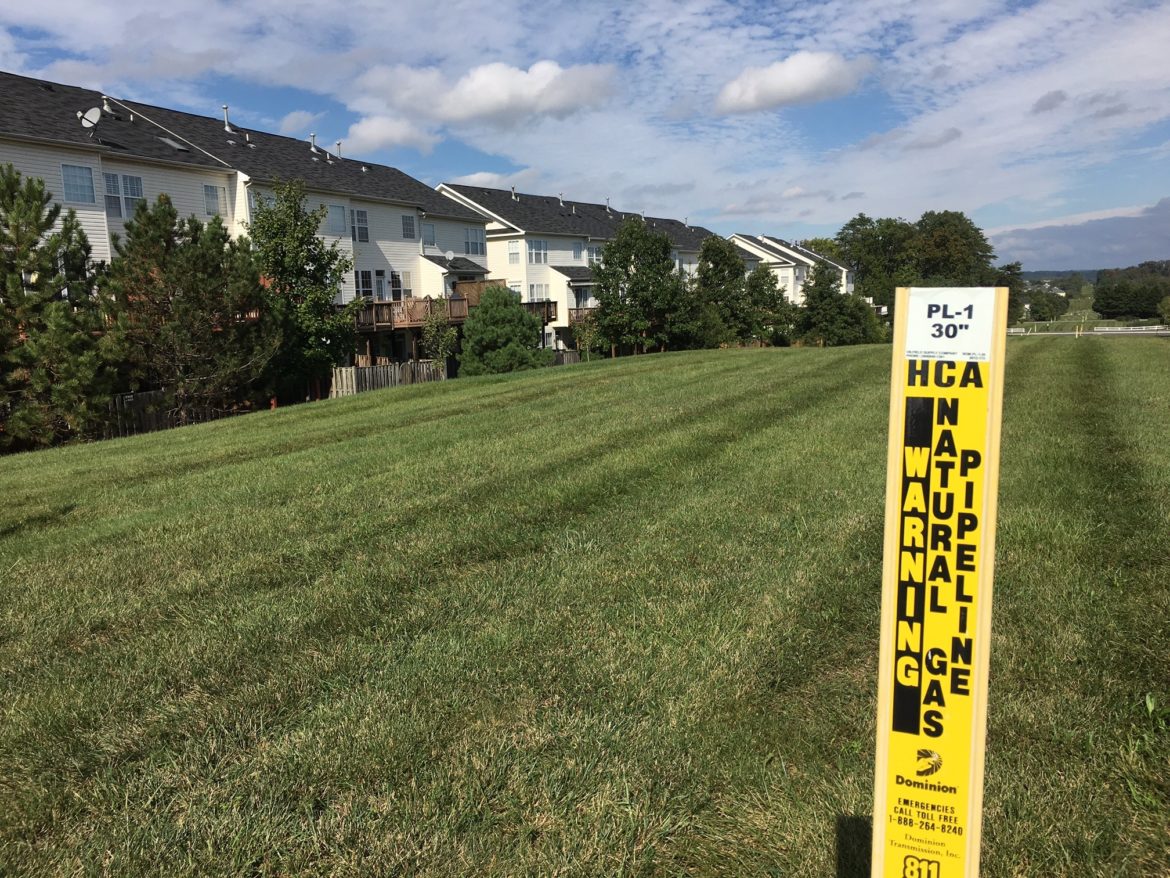 A stake marks a natural gas pipeline in Leesburg, Virginia.

While the incident was an isolated one, critics are calling it a cautionary tale as pipeline infrastructure proliferates. Further, there appear to be no specific state or federal guidelines for alerting the public and local governments before such work takes place.

As Dominion Resources vented its pipeline compressor station in Loudoun County on September 26, natural gas – mixed with an odorant for detection – spread as many as 10 miles east and north of the station throughout several residential and commercial developments. Normally, natural gas dissipates quickly into the air. But low cloud cover and humid conditions that day allowed the gas to spread, prompting the calls to emergency personnel, according to the county’s Fire Marshal, Linda Hale.

Dominion spokesman Frank Mack said – and county spokesman Glen Barbour confirmed – that notice was issued to the county in advance. But it is unclear whether the county shared the information with emergency personnel; and if it did, if any organizations beyond the county government, such as home owners’ associations and area businesses, received such a notice.

When Hale and her staff realized that the venting was not an emergency, Dominion and county staffers quickly wrote and issued a press release declaring such with Loudoun County officials.

Mack said the company, which apologized publicly for the incident, “never had an odorant event this significant as a result of venting” which is “a new factor that we are evaluating on how to best address going forward.”

In its apology, Dominion stated “at no time was the public in any danger from the venting operation.”

A reading of regulations administered by the federal Pipeline and Hazardous Materials Safety Administration at the U.S. Department of Transportation (DOT) and calls to Virginia’s State Corporation Commission and other agencies indicated there are no specific rules requiring how public notifications are to be carried out in advance for venting and other maintenance procedures.

Title 49, Subtitle B, Chapter 1, Subchapter D, Part 192.616 in the Code of Federal Regulations cited by DOT specialist Tewabe Asebe states that pipeline operators are required to “develop and implement a written continuing public education program” about operations and address any “unique attributes and characteristics of the operator’s pipeline and facilities.” Some details are captured in recommended practices maintained by the American Petroleum Institute.

Mack said Dominion does have an “Integrity Management Program” in place, which he said is updated every two years. A partial summary of it is posted online here.

Dominion operates 7,800 miles of pipelines in Virginia, West Virginia and four other states. The Virginia Corporation Commission has safety jurisdiction for more than 16,000 miles on intrastate pipelines that transport natural gas and hazardous liquids through the state.

Maria Bergheim, a pipeline opponent and resident of Loudoun County since 2009, said “There absolutely needs to be a warning way ahead of its scheduled vent(ing),” noting the September incident “took emergency resources away from where they could been (needed) elsewhere.”

“In this age of so many quick and easy methods of communication, it seems appropriate for consumers to be informed that there may be an odor,” said Cathy Frye, co-owner of the Brew LoCo coffee tea, wine and beer shop in the Lansdowne community in Loudoun. “That may have saved us, and our customers, the unwarranted concern and kept (telephone) lines we called free for real emergencies. As an asthmatic, I would have been sure to have my inhaler ready.”

Phyllis Randall, chair of the county’s Board of Supervisors, said she “requested that Dominion consider the weather forecast when scheduling venting activities. I have also asked Dominion to provide the county, members of the public and other stakeholders with more advanced notice so we can better anticipate the possibility of smelling of natural gas odorant which may help to allay concerns in the future.”

Pipeline critics seized on the spread of gas as “just one more indication of Dominion’s culture of disrespect,” said Nancy Sorrells, a former supervisor in Augusta County who co-chairs a community effort challenging Dominion’s plans for its Atlantic Coast Pipeline there.

On the same day as the venting operation in Loudoun County, activists and health experts testified against the Atlantic Coast Pipeline spotlighting the potential health impacts of venting and other operations at a compressor station Dominion has planned in Buckingham County, Virginia.

One of those who testified – Barbara Gottlieb, a researcher at Physicians for Social Responsibility – said some venting operations “generally are not made public” even if a pipeline operator has notified local government officials. She said the incident in Loudoun County would appear to reflect that.

A second round of venting work by Dominion Monday, October 3 was carried out without incident. Dominion issued an alert that also reached many homeowners’ associations the Friday beforehand explaining that “unlike the previous event, the October 3 venting will involve purging mostly air from the pipeline” during which “some trace amounts of natural gas odorant” might be released. “Local emergency management officials will be notified before and upon completion of the event.”

Dominion’s work at the Leesburg compressor station and a second station in Loudoun continues this week. The company explained in an alert on Friday that silencing equipment will “reduce as much sound as possible” and that “any smell (of gas odorant) will dissipate quickly under normal weather conditions.”