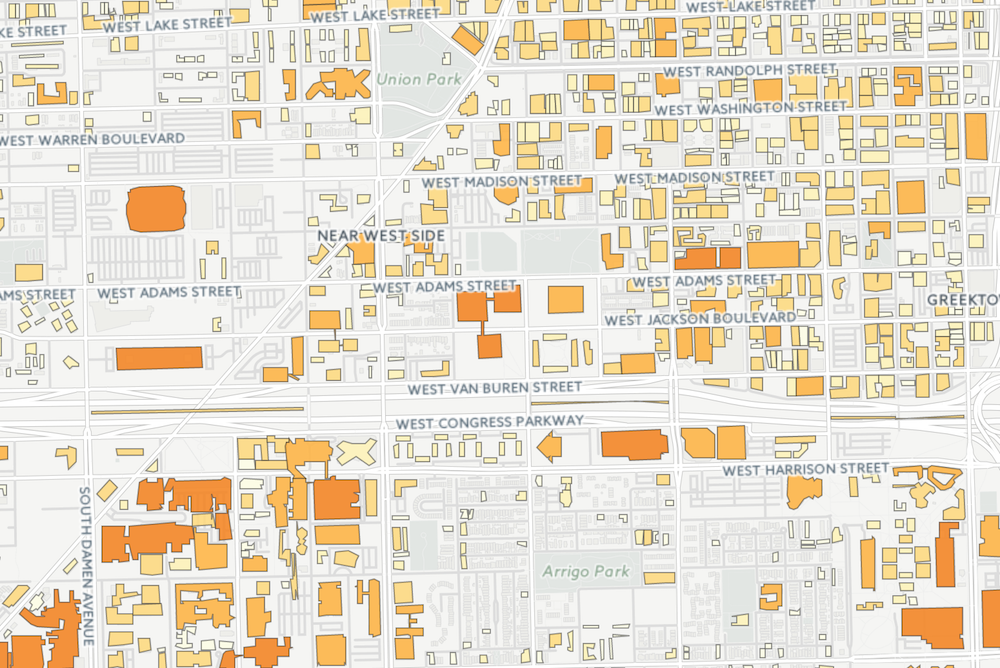 A map of available space in Chicago for potential community solar generation.

Mark Burger knows many residents in Oak Park, Illinois, are interested in solar power. The suburb just west of Chicago is known for its environmental and progressive culture, along with its leafy streets and Frank Lloyd Wright houses.

But Burger, a sustainable energy consultant in the area, says only a relatively small percentage of homes in Oak Park are suitable for solar because those trees shade their property, they rent in multi-unit buildings, or their roofs are not the right type.

So community solar —wherein people or organizations essentially buy shares or subscriptions in a solar installation located off their property — could be a perfect solution for Oak Park residents seeking clean energy, as Burger and others see it.

Meanwhile, the group Elevate Energy recently created a tool that could be useful in helping develop and spark interest in community solar in the Chicago area: an interactive map noting which properties have potential for community solar projects from 25 kilowatts up to 10 megawatts.

The map also includes information about community solar business models, stakeholders and how to go about developing a project.

“We designed the map and website to have a broad audience — it’s for the regular guy who would go on the map and learn about what community solar is, the step-by-step process they’d have to follow to participate, business models and financial models,” said Elena Savona, Elevate technical program manager and lead on the map project.

“Then solar developers can also see what areas they could target for their business. And municipal planners can look at it for where to plan solar in their community.”

The map currently covers all of Chicago, with other suburbs in Cook County to be added.

Properties are color-coded to show how much community solar capacity they have — based on building type and size — and the region-wide solar potential factor related to how much the sun shines. The map estimates how much power each location could generate and what that represents in avoided carbon emissions.

It also displays each building’s address, type and PIN number, which allows users to look up ownership and other data in public databases including the Cook County Assessor and Cook County Recorder of Deeds.

For example, about 130 homes could be powered by a 1-MW installation at the Merchandise Mart downtown office and retail complex on the Chicago River, which was the largest building in the country when it opened in 1930.

Or about 10 MW could be generated on a big swath of vacant land just south of downtown where development plans have repeatedly faltered or collapsed in scandal, and scores of homeless people live in tents.

Burger noted that residents who want to get solar energy in Oak Park and River Forest, another suburb where he is consulting, can participate in a community solar project anywhere in the utility ComEd’s service territory in northern Illinois. So he and others are looking outside their towns for spots to develop community solar.

“Theoretically if we were to try to get all our electricity [in Oak Park] from solar, we would need about a square mile of solar installations,” he said. “Oak Park is 1.5 by 3 miles, so that’s over 10 percent of our land area, that’s a little tough to do.”

He said large parcels of vacant land or large industrial facilities with abundant flat rooftop space would be ideal places to do community solar, and he’s especially interested in sites on Chicago’s South Side. The map will be invaluable in such research, Burger said. He is looking for sites big enough to develop a 2-megawatt array, which he said would require about five acres.

‘This tool will really help us get our first project developed.’

“I started doing research to find potential sites, as well as lining up potential customers and developers,” said Burger, who is a consultant for the firm Seven Generations Ahead. “So the development of this tool is really fortuitous for us. It’s such a time-saver and will really help us get our first project developed.”

“There are so many different models,” said Savona. “The owner of the building doesn’t have to be owning shares of it. It could be leasing the space to the community solar installation. [The owner] could have a revenue benefit, or just the environmental benefit, also the PR value — being able to say you have community solar.”

Burger said he’s found dozens of sites of interest, thanks to the map.

“I’m marking them down on a spreadsheet — primarily vacant land, also brownfields — and there’s the potential for doing it on flat roofs of industrial and commercial buildings,” he said.

Kumar Jensen, environmental projects director for Evanston, a suburb just north of Chicago, said the map will also be helpful for city officials and residents interested in community solar. Jensen is eager to see Evanston mapped; meanwhile like Burger, he can look for community solar sites around Chicago.

“This allows us from the city or a community group to be able to say what the potential is — we could use those footprints to say we think there is 500 kilowatts of roof space capacity in Evanston and we think it’s distributed into these roof sizes,” he said. “We’ve had groups approach us about community solar, and there are some developers and contractors interested.”

But Jensen said that more hospitable state legislation and utility policies are needed to spark a blossoming of community solar. The structure of community solar is a contentious part of two energy bills being hotly debated in the state legislature: the Next Generation Energy Plan proposed by ComEd and the Clean Jobs Bill backed by a coalition of clean energy groups.

“There’s interest, but not a whole lot of supportive state legislation that makes it attractive,” said Jensen. “There have been some hurdles in terms of how billing would take place, how people would buy into a system and then have a bill credit or have that show up on their ComEd bill. Those issues are just starting to be worked out.”

Jensen said community solar could help Evanston meet its climate action goals, including its participation in the Global Covenant of Mayors for Climate and Energy. And he said the interactive map specifically could spark individual interest in community solar.

“One of the biggest benefits is it’s publicly accessible, and you can combine that with data from the Cook County Assessor’s office or taxpayer information that’s publicly available,” he said.

“It provides commercial or residential tenants the opportunity to say, ‘Oh look, it looks like our building could have a 25-kilowatt array. Why aren’t we doing that?’ It just sparks the conversation and helps people actually visualize what it would be like to have solar on their roof.”