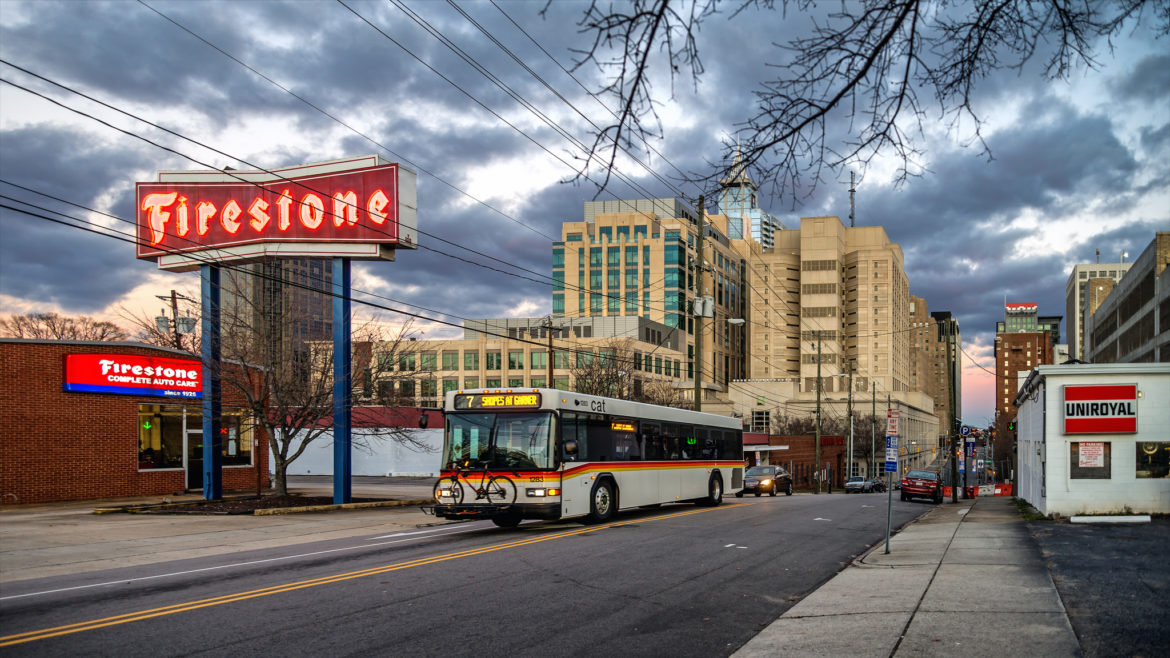 As the first day of early voting approaches in Raleigh, North Carolina, voters are being bombarded with ads about the close contests for the presidency, the U.S. Senate and the governor’s office – all featured on the front of the ballot.

But on the back of the ballot in Wake County, voters will face another, less publicized choice: whether to support a half-cent sales tax to help fund a 10-year, $2.4 billion transit initiative, one of 27 such transit projects at stake across the country in this year’s election.

Contrary to the state’s many rancorous campaigns for elected office, the push for the sales tax has been a far less contentious affair, with the transit plan the product of a painstakingly-achieved consensus supported by 10 of the county’s 12 mayors and a host of non-profits and businesses.

‘We’ve got to get started’

Transit advocates and community leaders, some of whom have sought to revamp the area’s transportation system for decades, say they prioritized public input in developing the plan and tried to avoid controversies that hampered prior efforts.

A commuter rail proposal from the early 2000s died because the federal government said it was too costly. A more recent light rail plan withered after a cold reception from an old slate of county commissioners dominated by Republicans.

“We have been talking about building out public transportation in Wake County since the late ’90s,” said Matt Calabria, recently-elected Wake County commissioner and a chief proponent of the transit plan. “The theme of the whole campaign is that we’ve got to get started.”

The key to that, he said, was getting input from a public increasingly worried about traffic congestion while maintaining a focus on cost and efficiency.

“We wanted to make sure that this was the community’s plan in form and in substance,” Calabria said. “It was important that everyone have input.”

Throughout 2015 commissioners and planners conducted more than 250 focus groups and events, solicited more than 4,300 public comments, and formed a 76-member advisory panel comprised of a range of stakeholders.

The resulting plan largely excludes expensive new infrastructure such as light rail, which would require new tracks and the potentially costly new rights-of-way. Instead, the proposed commuter rail would use existing Amtrak and freight lines and self-propelled diesel trains.

“Our planners would say being in favor of one mode of transport or another is sort of like building a house and being pro-hammer or pro-screwdriver,” Calabria said. “We relied on our planners to tell us the most effective and financially responsible course, and that’s what came out of our process.”

Two bus rapid transit lines — in which buses will have their own dedicated lanes on existing roads and get priority signaling at intersections – will move residents across Wake’s sprawling commercial centers, from universities, to hospitals, to downtown Raleigh.

By proposing to operate buses more frequently at more times during the day, the county is also responding to a top concern among current transit users about the inadequacies of the existing bus system – whose routes are limited on Sundays and at night, and not wide-ranging enough.

When the plan is fully implemented, half of all Wake County residents will live within a half-mile of a transit stop, with 70 percent of all jobs similarly situated. Transit will operate 7 days a week, 19 hours a day.

“I’m a conservative. I should be against all this,” said Mark Stohlman, the Republican mayor of Morrisville, a town of about 23,000 just west of Raleigh that’s home to the area’s airport. “The reason I support it is because I looked at the plan; I’ve seen all the prior plans, and I think this one is actually doable and can be implemented.”

From Millennials to Boomers

With a reputation for good public schools and well-paying jobs, Raleigh consistently ranks high on “best place” lists, one reason Wake County is one of the country’s fastest growing metro areas.

“Young folks like me want to live somewhere that has a high quality of life – we’ve got it; that has great employers – we’ve got it. But we’ve got to have that other thing: public transportation,” said David Powe, who works with WakeUP Wake County, a nonprofit that promotes smart growth and public transit.

“This plan has created an opportunity for us to check all of the boxes for a wonderful place to live,” Powe said.

“Our community is getting older and there’s a need to provide more mobility options for seniors,” said Tim Maloney, director of the Wake County planning department. “We heard that a lot in our community meetings.”

“If you wait until you need it, it’s too late,” she said. “I didn’t want to have to be like my dad, when my sister told him he couldn’t drive anymore.”

Wire was among those attending a continuing education seminar for older adults at N.C. State University last week, where Powe delivered a presentation on the transit plan – one of a dozen or more such talks he gives each week to groups around the county.

Some, like Wire, saw how their own self-interest could be served by improved transit. Others, like Cary resident Sandra Close, thought primarily about the benefits to their children and grandchildren.

“We’re in the age group that might balk at this, but they’re not,” she said.

For all its support, the plan isn’t entirely without detractors. The Wake County Taxpayers Association has listed online its grievances with the proposed sales tax hike and the transit proposal itself, which members feel won’t work and isn’t worth the expense to taxpayers.

Tony Pecoraro, the association’s vice president, emphasized that he was “pro-public transit,” but thought most of plan was inappropriate for Wake County, which he said lacks sufficient population density to justify rail and bus rapid transit infrastructure investment.

One section of the anti-tax website also complains that the transit plan is based on “old technology.”

Calabria, the county commissioner, said Wake was “developing this plan with an eye toward technological trends,” and the ability of entities like Uber or Lyft to solve the “last mile problem”: getting riders to their final destination after transit took them as far as it could go.

Calabria and other advocates also stressed that the 10-year plan would meet pressing needs, but also allow flexibility for adjustments along the way as ride services and technology improved.

Both the rail service and the bus rapid transit could be electrified, for example, amplifying their environmental benefits, a priority among many of the participants in focus groups.

Above all, advocates and planners said there was a general sense that the current transit system was falling short of the area’s needs, and would fall even further short as the region continued to grow.

“Now’s the time to do something,” said the Wake county planner Maloney. “That’s recognized throughout the community.”

Stohlman, the Morrisville mayor, is optimistic the sales tax measure will pass precisely because a motivated group of voters recognize the current need all too well.

“We know the congestion,” he said. “We all just live this too much every day.”