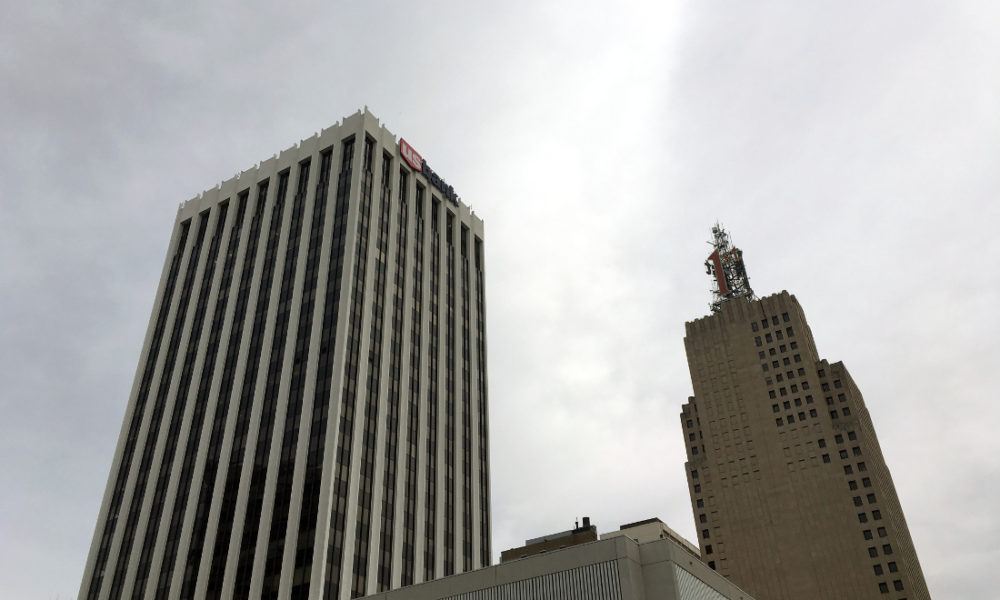 The First National Bank Building, right, and the U.S. Bank building in St. Paul are part of what's believed to be the largest PACE-funded efficiency project in the U.S.

In downtown St. Paul the historic First National Bank Building and two neighboring properties have been collectively retrofitted with new heating, cooling and lighting technology paid for through the largest energy efficiency financing packages likely ever assembled in the country.

The energy savings alone from the project would, according to one estimate from Xcel Energy, power 1,235 average residential homes, a population greater than many Minnesota communities.

Covering more than two million square feet, the more than $12 million project is being financed through a property assessed clean energy (PACE) program managed by the St. Paul Port Authority. Energy expenditures for the three buildings will plummet by an expected 35 to 40 percent annually.

The PACE program allows building owners to pay off energy improvements on their property assessments over a 20 year period at competitive interest rates. Dozens of states are encouraging PACE financing because it allows building owners the luxury of time to pay off new equipment, solar installation, LED lighting and other energy-related technology.

At 32 stories, the landmark First National Bank building is the third tallest in St. Paul. The other buildings involved are the 26 story U.S. Bank Center and the smaller 375 Jackson. The project will be completed in November.

James Crockarell, who owns the buildings through his firm Madison Equities, Inc., said all the properties’ mechanical systems had reached the end of their lives and he sought advice from the St. Paul Port Authority and Xcel Energy on what to replace and how to pay for it.

PACE financing was not familiar to Crockarell until he spoke to Peter Klein, the Port’s vice president of finance. “We had heating and air conditioning equipment in all three buildings that had reached the end their useful lives,” Crockarell said. “This was a major undertaking to finance that and this looked like a good way to do it.”

One landmark that had to be restored as part of the project was the red “1st” sign atop the First National Bank Building. After Madison owned the property for only a year, a wind storm blew through St. Paul and knocked out many lights on the sign.

“We had a structural analysis of the problems with sign and looked at removing it and the cost of supporting the sign with LED lights,” Crockarell said. “This was a St. Paul icon and there would have been a lot of disappointment if we had taken the number 1 sign off the building. I think (replacing) it was a good decision.”

Considering the cost of the retrofit, another partner was needed for the financing. Petros PACE Financing of Austin, Texas stepped in to provide more than $10 million in equity. Around half the money went to the First National Bank Building, the rest to the other properties.

The remaining financing came from the Port Authority, with $600,000 chipped in through tax credits.

The advantage of PACE financing for Madison Equities is that the building owner can share the cost of the project through property assessments added to their Ramsey County real estate taxes, Klein said. It’s a line item on the tax bill, he said.

However, the increase in taxes to pay for the improvements will be more than offset by the decrease in energy costs. “They’ll save more energy than their share of property tax will be,” Klein said.

The Port Authority has done more than 50 PACE projects, two-thirds being for financing small scale commercial solar installations of 40 to 80 kilowatts, he said.

The success of the Madison Equities project may bring more interest for using PACE for energy efficiency, Klein said, because more and more companies plan to only lease office space in the future in energy efficient buildings.

Crockarell has two more large downtown projects involving the renovation of an office building into apartments and transforming a vacant retail space into a hotel.

While he liked using PACE for the three buildings, he’s uncertain whether the apartment and hotel project will enroll in the program or whether he’ll simply include energy efficiency technology in a traditional construction loan package.

A sophisticated building automation system is being installed to allow building managers to see how equipment – cooling towers, heating systems – are operating.

Tenants can set their own temperature and humidity in rooms, Hepfler said. The system can detect issues at the level not just of a floor, but a room, he said.

And the building can be managed remotely. “They’ll be able to control those buildings while sitting on a beach in Florida – from their phones,” he said. “It’s pretty impressive.”

The project comes at a time of growing interest in employing energy efficiency as a way to reduce greenhouse gas emissions. The built environment accounts for 39 percent of carbon emissions, with commercial properties constituting 18 percent of that total. Better efficiency results in less demand on often fossil-fuel based generation.

Hepfler said a confluence of factors made the project special, starting with a timetable that moved much faster than normal. The First National Bank Building warranted its own case study on Xcel’s website. All told, Madison Equities will receive nearly $1 million in rebates and bonuses, with the other buildings likely to add another $500,000 to the total.

“It was the perfect storm of having the right customer with the right motivation, the right building, the right timing and the right resources,” he said. “It all came together.”

Editor’s note: An earlier version of this story misspelled James Crockarell’s last name. We apologize for the error.