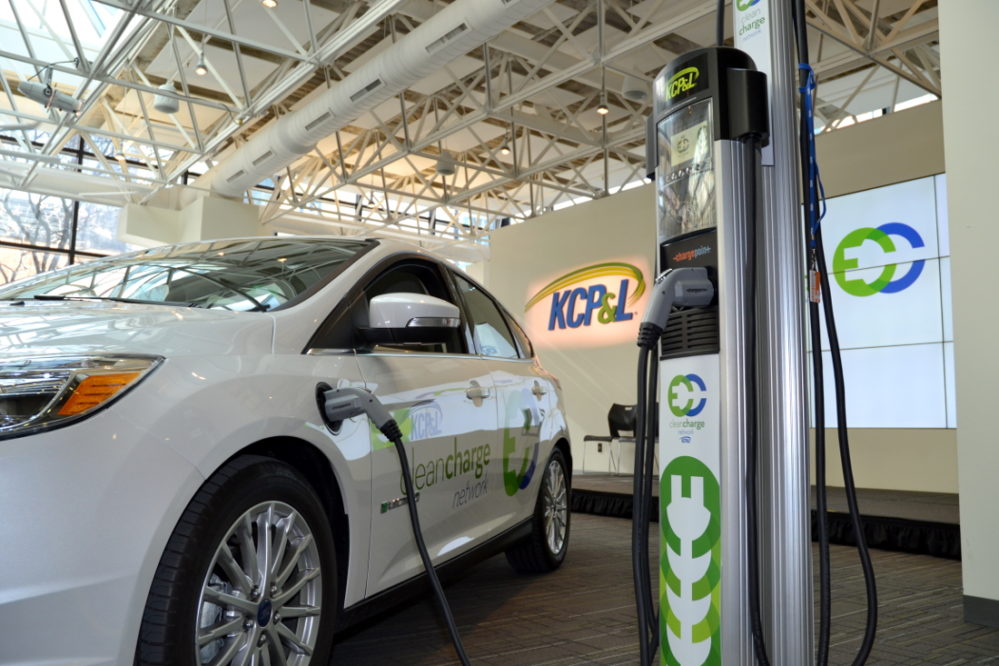 Efforts to expand electric vehicle infrastructure in the Kansas City are hitting a roadblock amid pushback from state regulators.

Early in 2015, Kansas City Power & Light announced it would install about 1,100 electric-vehicle charging stations in the greater Kansas City area. At the time, it apparently was the largest such undertaking in the country. The utility indicated that it wanted to give a nudge to the electrification of vehicles – a potential boon for KCP&L and electric utilities in general.

But KCP&L is backing away. Following installation of about 230 of 315 charging stations it had planned for the Kansas side of the Kansas City metropolitan area (the project is also underway in Missouri), the utility put the other 85 on hold after the Kansas Corporation Commission last month denied the company’s request to charge ratepayers for the $5.6 million initiative.

“This is a big issue,” said Dan Delurey, president of the Wedgemere consulting group and author of a newsletter about demand response and the grid. “The issue is whether or not utilities can step out in front…and how infrastructure is going to be paid for under the new grid that will be more distributed.”

The Kansas commissioners and staff said the utility was meeting the needs of current electric-vehicle drivers, and had failed to prove a need for a large build-out. Furthermore, they argued the proposal was anti-competitive and would require customers to subsidize a handful of electric vehicle drivers.

Although the company has not yet formally sought compensation for the $11 million that it is now spending to install the chargers in Missouri, the initial feedback from the state’s Public Service Commission is not encouraging.

As part of a recently-completed working docket to explore regulatory issues related to electric vehicles, the commission staff wrote, “…captive ratepayers should not be required to pay for charging station networks that will only directly benefit a small number of ratepayers. The end user of the electricity should be required to pay.”

A KCP&L spokeswoman wrote in an e-mail that, “As a result of the (KCC) ruling, we are putting a hold on the installation of new charging stations in Kansas and plan to revisit electric vehicle charging infrastructure with the KCC at a later date. In our Missouri territory, we are still on track to continue our discussions with the Missouri Public Service Commission.”

The utility has asked the Kansas commission to reconsider its decision.

Benefits not being recognized?

In at least a couple other states – where electric cars have made greater inroads – regulators and legislators have encouraged, or even required, utilities to develop charging networks, according to Maxwell Baumhefner, an attorney who monitors policies and legislation regarding electric vehicles for the Natural Resources Defense Council.

“I think regulators are increasingly recognizing that accelerating the market for electric vehicles can benefit all utility customers,” he said. As evidence of that, he said, California’s commission recently endorsed plans by three utilities to develop vehicle-charging networks. And Baumhefner observed that the Oregon legislature earlier this year passed a law that instructs that state’s regulators to order utilities to propose programs and investments by the end of this year “to accelerate transportation electrification.”

In the Kansas case, no clean-energy advocates spoke out in support of the utility’s request to add the cost of the charging stations to the “rate base,” which would allow it to recoup the direct costs and to earn some profit as well. However, the Citizens Utility Rate Board, an entity charged with protecting the interests of ratepayers, opposed the utility’s request.

The rate board and the commission’s staff expressed several concerns about KCP&L’s initiative in addition to what they saw as a lack of evidence of a need for charging stations in the utility’s territory. They also warned of coming technological changes, such as wireless charging and more powerful batteries, that could render charging stations obsolete within a decade and create a “stranded asset” that would hang around customers’ necks.

They also pointed out that most charging occurs at home, not at the public places where KCP&L has been installing chargers.

In Missouri, a coalition of clean-energy advocates filed comments with the public service commission urging policies to support utility investment in vehicle electrification. The broader population, they argue, would benefit from lower electricity costs, cleaner air and a more stable and reliable grid.

Electric vehicles benefit all users of the grid because they make more – much more efficient – use of a system that is now vastly underutilized, Baumhefner said. Power companies must maintain a system that can meet the highest demand all year – say, the middle of a July afternoon – even though much of the system is unused much of the remainder of the year.

The result of the varying demand on the system, Baumhefner said, is that “There’s enough spare capacity in the nation’s electric grid to power all of our passengers cars and trucks. The system is vastly underutilized, primarily at night when people are sleeping.” By charging cars overnight, he said, “You take advantage of that spare capacity. If you did that, the associated revenue would put downward pressure on the cost of electricity to the tune of 20 or 30 percent.”

It would pay off because the greater number of kilowatt hours of power sold would mean that the “fixed costs” of generating power – which utilities generally characterize as the vast majority of their costs – would be spread out over many more kilowatt hours, meaning that the cost for a single kilowatt hour would decrease.

Although the current utility business model is clearly threatened and in flux, finding the successor is no easy task, as Delurey articulated in a recent newsletter. He drew a comparison to an experiment conducted by Puget Sound Energy nearly 20 years ago. The company introduced a new smart meter – the first large utility in the nation to do so, according to Delurey. Although many customers liked the new features and time-of-use rates, the experiment ended poorly for the company and its CEO.

As former utility-employee Delurey sees it, in this time of upheaval and rapid technological change, both episodes point to the need for regulators to encourage the innovation-averse utility industry to go out on a limb on occasion.

“It’s not time to throw out the rulebook,” he wrote in a recent post, “but it certainly needs a rewrite that creates a system that is fair to utilities in that it encourages and/or requires change and provides a way to pay for it.”