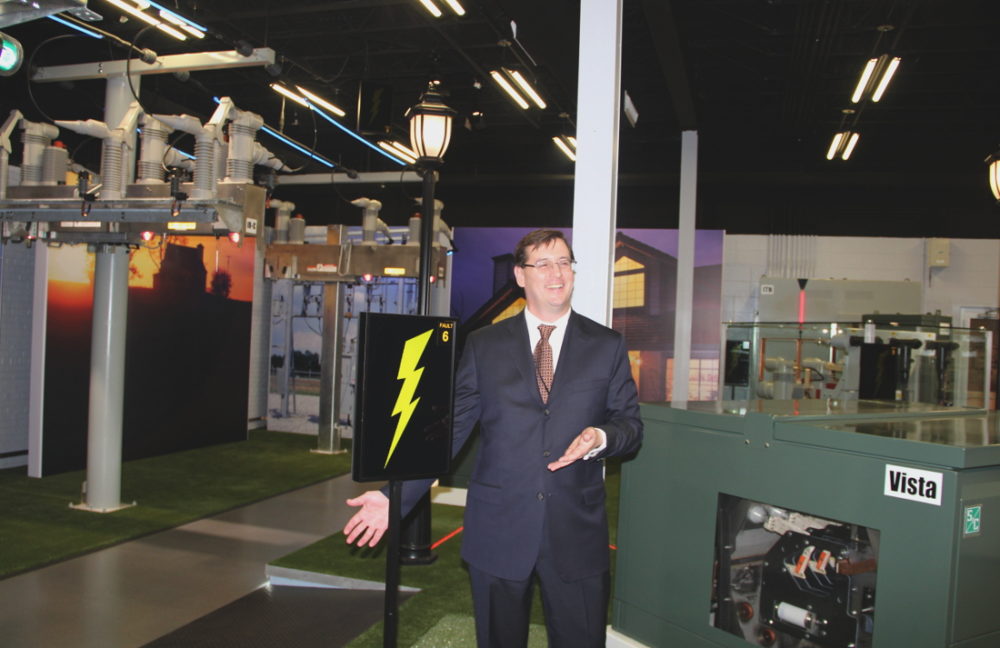 Neighbors of the S&C Electric Company in the Rogers Park neighborhood of Chicago might not even know the 47-acre factory and research facility is there. It is recessed below street level on the site of a former tire yard, designed to meld into its surroundings and bedecked with a green roof.

But this inconspicuous institution has played a significant role in the innovation and build-out of the country’s grid over the past century, including the development of the smart grid in the Chicago area and across the continent today.

S&C’s founding was sparked by a 1909 fire at the Fisk coal-fired power plant in Chicago’s Pilsen neighborhood, the first commercial-scale coal plant in the country. S&C’s founders Edmund Schweitzer and Nicholas Conrad developed a fire-proof liquid fuse that could contain high-voltage short circuits and avoid such disasters.

Since then the company has often been on the cutting edge of grid technology, including the smart switches and energy storage equipment crucial to the smart grid and the spread of distributed renewable generation.

In S&C’s Product Demonstration Center, elevated switching equipment rises like tubular metal trees, at first glance all appearing identical to each other. But some are old-fashioned models where an electricity line can only be deactivated by physically turning a big switch. A newer version, launched in the 1990s, automatically switches off when the line is compromised — by a fallen tree or other obstacle.

Then there’s the latest smart version, which will shut off automatically when there is an obstacle or risk, but can also turn itself back on when appropriate. For example if a tree limb blows against the line but then recedes…or if a squirrel jumps between wires and causes a temporary short circuit.

Michael Kilpatrick, S&C’s director of Asset Management and Field Services, explained that in the old days the utility company wouldn’t even know electricity was out until they got phone calls from frustrated customers. And then they’d have to send out a truck looking for the problem street by street.

The 1990s model told the utility exactly where the problem was. The new verstion, dubbed the IntelliRupter PulseCloser Fault Interrupter, launched in 2006, not only relays information about the problem, but automatically remedies it. It instantaneously reconfigures the whole system to isolate the problem area and send backup sources of electricity to surrounding areas that otherwise would have been cut off; and when it’s safe to turn the electricity back on, it does so automatically.

“Right now all these devices are talking to each other – ‘How much line current do you have, how much capacity do you have, if there’s a fault – do you see that?’” explained Kilpatrick. “If lights go out and are not back on in 5 seconds, they’re probably going to be out a while. That means the tree is near you, and it will be there until someone removes it.”

He noted that Chattanooga, Tennessee invested in an especially resilient grid, with 1,200 S&C IntelliRupter smart switches, meaning a switch for every 167 customers. Data centers and other high-tech companies that need reliable energy were attracted to the town as a result, and the smart grid reportedly saved Chattanooga $1.4 million during one severe windstorm in 2013.

Smart switches are a huge benefit for maintaining a grid even without distributed and renewable generation. Then when increasing numbers of solar panels, wind turbines, batteries, combined heat and power units or other types of distributed and renewable generation are installed, smart technology becomes crucial to keeping the grid running smoothly.

“The utility is only used to one direction [flow of electricity], now it’s two-way,” said Kilpatrick.

Kirkpatrick presses some buttons on the console controlling the demonstration project, to simulate different scenarios. If the wind stops and the turbine stops generating, then the grid automatically starts drawing from alternate sources of power, like natural gas or nuclear plants. The demonstration “electric lines” change color to indicate this switch.

Then he pulls a lever adorned with a lightning bolt in the middle of the town to simulate an electric fault. With loud cracking sounds, nearby electric lines go dark. But almost as quickly new lines light up as the grid reconfigures itself.

A battery buried below ground under an energy storage system lights up, helping deliver power to the area cut off by the fault. So as opposed to the old days when the whole neighborhood would have been out of luck for potentially hours, now only the small part of the grid right around the theoretical fallen tree goes off-line. And the utility knows exactly where that is and can fix it much more quickly than in the old days.

Next to S&C’s smart grid demonstration sits a line of green metal boxes, housing energy storage systems, mounted on astroturf under which is buried big lithium ion batteries. The batteries and infrastructure inside the green boxes are the real thing, but displayed in a way that visitors can see what normally would be buried under ground.

And these energy storage units, manufactured at S&C’s plant in Franklin, Wisconsin, are not just for show. They are participating in the automated frequency regulation market run by PJM.

Electricity on the wires needs to hover around 60 mHz in frequency in order to move efficiently and power the appliances of customers. When demand on the system spikes, for example when many people turn on air conditioners, the frequency on wires can rise. When demand drops and generation being fed onto the grid exceeds demand, then frequency drops. Either change can be a problem.

In PJM’s auction, generators are paid to increase or decrease their input to the grid in order to keep frequency constant.

But it can take some time to ramp generation from a coal or gas plant up and down. Batteries are a different story. They can send electricity onto the grid or soak up electricity from the grid as needed to smooth out frequency, and they can switch between these states in just fractions of a second.

At S&Cs headquarters, six batteries capable of storing 25 kilowatt-hours of electricity each are attached to the grid. Electronic message boards show how long it would take, based on current prices, for the investment in such a battery bank to pay off. For example, a one-megawatt-hour system that costs a million dollars would break even in between three and six years depending on its performance in the frequency regulation market and the fluctuating prices paid for frequency regulation.

S&C has been selling energy storage equipment for the grid for about a decade, with a total of about 170 MWh worth of hardware installed in the U.S., Canada, Australia, England and other countries. S&C recently provided the largest grid-connected battery in Australia, the company says, a 2 MWh lithium ion battery along a rural electric line.

And in more recent years, S&C has been a leader in providing battery systems that are paired with solar panels to power sections of a town. (S&C does not manufacture batteries, but acquires them and provides customers with the batteries and necessary equipment to integrate with the grid.)

S&C supplied the batteries and integration equipment for a project that went online this spring in Minster, Ohio, which is the largest solar-plus-storage project owned by a municipal utility. The developer Half Moon Ventures runs the 7 MW solar farm and 3 MWh storage bank, selling energy to the town and participating in PJM’s frequency regulation market. The installation serves the town’s 2,800 residents and commercial customers, including a major Dannon yogurt factory.

The frequency regulation market helped make the solar project viable after the state’s freezing of renewable energy mandates gutted the ability to finance it through selling renewable energy credits, as the Cleveland Plain Dealer reported.

“As there is more and more distributed energy resources, whether solar panels on homes or commercial facilities or combined heat and power, they are generating power behind the meter that PJM can’t control,” said S&C spokesman Spencer Zirkelbach. “Energy storage becomes the Swiss army knife tool to absorb energy from the grid acting as a load, and to put power back on the grid.”