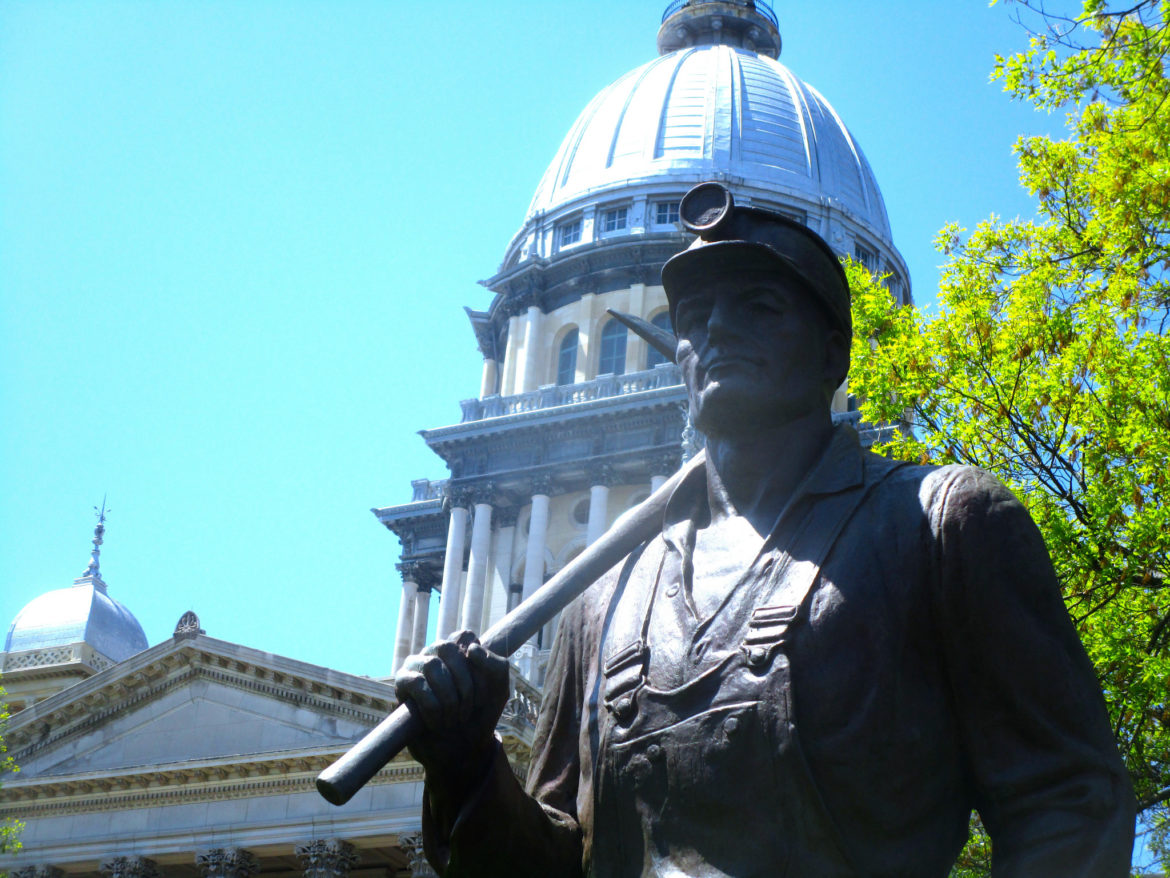 A statue of a coal miner outside the Illinois state capitol building.

For more than a year, Exelon has been pushing a bill mandating ratepayer supports— now pegged at up to $265 million a year — for two nuclear plants the company says would close otherwise.

This bill, dubbed the Future Energy Jobs Bill, is an attempted collaboration between Exelon and other generators, utilities ComEd and Ameren Illinois, and environmental groups and renewable energy companies.

Negotiations between these stakeholders have been going on for many months, but people familiar with the negotiations say that the most controversial provision, which would keep downstate coal plants running, was just added recently and could be a deal-breaker for environmental groups.

The proposed FRAP, or Fixed Resource Adequacy Plan, would put the state in charge of determining capacity prices paid to generators, most notably two downstate coal plants owned by Dynegy. Under the proposed bill, these prices would likely be significantly higher than the capacity prices that would otherwise be paid through auctions run by the Midcontinent Independent System Operator (MISO).

The costs will be passed on to ratepayers, and are expected to mean the coal plants would keep running, rather than closing.

The provision is widely seen as an attempt to gain support from downstate lawmakers who see keeping the coal plants open as a way to preserve jobs. But critics say the measure will do little or nothing to help downstate economies and will burden ratepayers with higher bills.

“This is going to be the largest rate hike in U.S. history,” said Dave Lundy, head of the BEST Coalition of environmental groups, businesses and others that oppose the supports for nuclear and coal plants in the bill, at a press conference shortly after the bill’s introduction. “We have analyzed this bill extensively. This bill is going to cost $24 billion, that’s billion with a ‘B’.”

He described how the cost of the bill has escalated from $3 billion when Exelon first sought the nuclear plant supports to the current price tag.

“This does not help Illinois coal because those plants all burn western coal,” Lundy added. He noted that Illinois generates 41 percent more electricity than the state needs, so statewide supports for power plants are essentially subsidizing rates for customers in other states.

Lundy said the coal and nuclear plants are simply not economical on the current market, and “that’s why they’re here at the trough asking for five and a half gigawatts of power to be subsidized in perpetuity.”

“They take us for fools and tell us things they cannot deliver,” he said.

There has been much controversy in recent years over Illinois ratepayers’ costs for capacity — a generator’s promise to be available to provide a certain amount of electricity if needed. Dynegy had previously sought — unsuccessfully — to move from MISO to the PJM regional transmission organization which covers northern Illinois, and which typically pays much higher capacity prices. Dynegy and Exelon had also both proposed changes to how MISO’s capacity auctions are carried out.

Along with ire about the coal and nuclear supports, there is opposition to the demand charge included in this bill and strongly backed by ComEd.

The demand charge would change how a customer’s bill is calculated so that it is based largely on the highest spikes in demand, not overall electricity usage. Community organizations say this would mean harmful rate increases for low-income people and the elderly, and solar developers say it would freeze the state’s solar market since it would be nearly impossible to predict the finances and payback period for installing solar.

“I clean my house in the morning and early afternoon, that’s not a time when there’s stress on the grid, but still I will be penalized under demand rate charges,” said Dee Taylor, a member of the group Illinois People’s Action, at the press conference. “I shouldn’t be penalized for doing my laundry at off peak times. If anything, I should be rewarded.”

The bill would also eliminate net metering, where customers with solar are paid retail rates for electricity they send back to the grid, and replace it with a one-time rebate for solar installations.

“Exelon and ComEd are touting this bill as a job saver,” by keeping nuclear plants open and adding clean energy jobs, said Amy Heart, director of public policy for solar developer Sunrun. “But on day one, there will be men and women who will be looking for jobs” because of a collapse of the state’s solar industry. “With the radical demand charges and elimination of net metering, they are also eliminating the options for residents to do anything about the rate hike.”

Despite longstanding vehement opposition to the nuclear supports and the demand charge, the bill has lurched forward with some degree of consensus in recent months because clean energy stakeholders are eager to pass an energy bill that includes the fix to the state’s Renewable Portfolio Standard (RPS), an arcane but crucial change in the structure of the policy that advocates say is necessary to spark new solar and wind construction in the state.

Such a fix is included in this bill, along with significant increases in energy efficiency investments in ComEd’s service territory.

Even before the bill was introduced, Exelon launched a website plugging the Future Energy Jobs Bill and asking residents to contact their legislators in support. The website touts doubled energy efficiency investments and promises the creation of 4,200 jobs and a $1 billion commitment to programs for low-income customers.

Previously, environmental and solar groups and businesses were backing a proposed Clean Jobs Bill which included the RPS fix. Exelon had previously introduced its own bill with nuclear supports while ComEd backed its own bill proposing new rate structures, microgrids and other provisions. ComEd and Exelon, its parent company, later merged their bills into one called the Next Generation Energy Plan in the spring, now supplanted by the Future Energy Jobs bill.

Illinois’ legislative veto session runs this week for three days and then for three days the week after Thanksgiving. The state has still not passed a 2016 budget, as the Republican Governor and Democratic legislature have been in a vicious standoff for months. So passing a sprawling energy bill soon is likely a long shot.

Critics urged legislators not to feel pressured to pass the bill during the brief veto session, with Lundy noting that at 446 pages it would “make a nice mantlepiece.”

Abe Scarr, director of the public interest group Illinois PIRG, described the bill, particularly the rate design changes, as an “end-run” around the Illinois Commerce Commission, which would normally decide such issues after taking expert testimony and doing copious studies.

“It is disingenuous on the part of utilities to come to the legislature to request this type of rate hike,” said Sheila Garland, an organizer with National Nurses United, who spoke about how the bill would harm low-income and minority residents. “We need to think long and hard, this legislature, about why we need to rush ahead.”