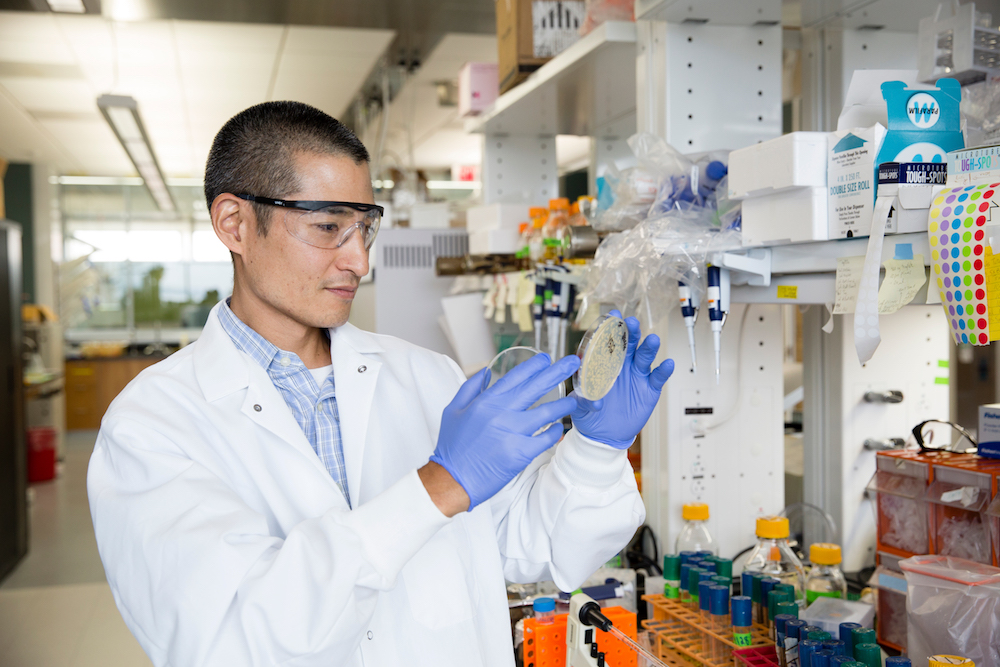 Beer and bread aren’t the only products that rely on the transformational powers of yeast. The prospects for cellulosic ethanol becoming a commercially available clean transportation fuel could also hinge on yeast’s ability to ferment corn stalks, switchgrass, wood chips or other fibrous feed stock.

The same strain of yeast typically used to brew beer and bake bread — Saccharomyces cerevisiae — has also been widely used to metabolize cellulosic ethanol feed stocks in experimental and pilot projects. But the process so far has been too slow and inefficient to present a realistic commercial opportunity.

Scientists genetically engineering yeast, including at Midwestern institutions, hope they can change that.

Last month researchers at the Great Lakes Bioenergy Research Center and the University of Wisconsin announced a breakthrough that allows S. cerevisiae to metabolize xylose, a five-carbon sugar that it cannot normally ferment. They did this through a supervised, rapid process of evolution wherein yeast was given no choice of food other than xylose so that it evolved through mutations to be able to consume it.

Meanwhile at the University of Illinois, researchers are working on a similar mission, having merged S. cerevisiae with another strain of yeast and then induced mutations that allow it to efficiently ferment xylose.

Researchers around the world are also working on other challenges, including an MIT project that found ways to allow yeast to survive higher concentrations of ethanol; and a project in Sweden that allows fermentation to happen at higher temperatures.

In things like corn stalks, xylose can make up between 30 and 50 percent of total sugars, explained Trey Sato, lead researcher on the Great Lakes Bioenergy Research Center project and an associate scientist at University of Wisconsin.

“So these industrial companies and farmers are harvesting tons of plant material, corn stover, and then shipping it by train from the field to the plant. That’s an energy-costly process, the labor and energy to move the material, and the margins are thin. If they are throwing half the material away, it’s inefficient.”

Yeast reproduces quickly, making it a prime candidate for genetic experimentation. Once the yeast had gone through hundreds of generations of reproduction in Sato’s lab, it became able to metabolize xylose.

Then Sato’s team examined the roughly 5,200 genes in both the mutated strain and the original strain to find the four mutations. When those genes were deleted from the original strain, it was able to metabolize xylose, indicating that those mutations were responsible for the change.

“What often is hard to figure out is what genetic changes occurred from the directed evolution,” Sato said. “A lot of times multiple mutations occur — some can be beneficial, most have no impact. We did it under conditions that allowed us to identify all the mutations that occurred, and which are important.”

The mutations that allowed the yeast to metabolize xylose also seemed to make it more susceptible to stress, which is inherent in an industrial process. Sato said they are trying to analyze and address this problem.

While Sato’s lab used a type of S. cerevisiae isolated many years ago on bananas in Costa Rica to ferment corn stover or switchgrass, he said that these mutations can be engineered in different strains of yeast, meaning scientists and manufacturers can tailor the method to their own types of feedstocks and biofuel manufacturing processes.

Before fermentation occurs in the biofuel manufacturing process, cellulosic feedstocks are typically softened by soaking in an acid or base, heating or other “pre-treatment” methods. Sato’s lab works with collaborators at Michigan State University who treat the material with ammonia gas administered at a high temperature and high pressure.

Sato noted that it is no accident it is so hard to ferment the hard, fibrous or woody plant material being eyed for cellulosic ethanol. That’s because those things evolved specifically to be resistant to breakdown.

“Just taking starch from corn kernels, the fermenting organism is going to make [first generation] ethanol” easily, he said. “But cellulosic material from stalks or wood chips is a lot tougher. It makes sense. Trees and plants have been around for many millions of years. Even with dead trees, that material sticks around for a long time, because those plants have figured out mechanisms to survive.”

The Great Lakes Bioenergy Research Center and other institutions are looking to the natural world for ways to better break down (or pre-treat) the material that could be used for cellulosic ethanol. “Bio-prospecting” researchers analyze termites, wood wasps, leaf-cutter ants, cows’ cud and animal excrement for the micro-organisms that break down such material in nature.

Yong-Su Jin, a professor of food science and human nutrition at the University of Illinois, is working on the biofuel yeast puzzle with researchers at the Lawrence Berkeley National Laboratory, the University of California and the energy company BP.

He noted that another yeast strain, Pichia stipitis, is naturally able to ferment xylose. His team transplanted Pichia genes into S. cerevisiae, allowing the xylose fermentation to take place. But it was inefficient. So similarly to Sato’s team, his lab put the hybrid strain in an environment where it was forced to feed on xylose, and waited for the yeast to mutate until it achieved much more effective rates of xylose fermentation.

Jin compared it to a student who does poorly every time he takes a math test on Mondays but does well every time he takes a test on Thursdays — the correlation wasn’t clear and there seems to be an unknown factor. Eventually, he said, they began to figure out the relationship between the mutations and the improved xylose fermentation.

They also found another way to “trick” the yeast into metabolizing xylose more quickly. Even yeast that is capable of breaking down xylose “prefers” easier-to-break-down six-carbon glucose sugars, so if both options are available it will break down all the glucose quickly before turning to xylose.

But that process is inefficient and comparable to a marathon where the great majority of runners finish in a few hours but streets need to stay closed all day for a few stragglers, Jin said.

Two glucose molecules stuck together constitute a sugar called cellobiose. The researchers attached a cellobiose transporter to the yeast which causes them to essentially suck the linked glucose inside and metabolize it at the same time as they metabolize xylose, rather than gobbling up all the glucose first.

‘Glucose and xylose are like ice cream and broccoli for my son.’

“It’s multi-tasking, or co-fermenting, so we are able to produce biofuel faster,” said Jin, who last year made headlines for pioneering a “genome knife” for yeast billed as opening the door to hangover-free wine.

“Glucose and xylose are like ice cream and broccoli for my son,” Jin said, the glucose being the sweeter option.

“If I give him broccoli and ice cream, my son will only eat ice cream, he won’t touch broccoli until he consumes all the ice cream. So let’s make broccoli ice cream. It will taste worse than the other ice cream but he’ll eat it all.”

Jin’s team also succeeded in overcoming a challenge created by fermenting xylose: the production of a waste byproduct called xylitol. Xylitol is produced by the “dumping” of extra electrons sloughed off during the fermentation process, Jin explained.

But those electrons can also be directed into the reduction of acetic acid, a toxic organic acid that comes from the fermentation process. The Illinois and California researchers figured out how to make the yeast consume the acetic acid and produce ethanol, in the process also getting rid of the xylitol from xylose fermentation, and making the process more efficient.

Like the Illinois and Great Lakes-Wisconsin projects, the University of Chalmers in Sweden used yeast’s rapid evolution to develop a strain that can ferment feedstocks at higher temperatures. Yeast typically wants to work at about 30 degrees Celsius, but the enzymes that break down sugars work better at temperatures 10 degrees warmer.

At MIT, Professor Gregory Stephanopoulos and colleagues used chemistry and genetic engineering to protect yeast from being killed by increasing concentrations of the very ethanol they are making. They found that adding potassium chloride and potassium hydroxide to the medium around the yeast increased resilience to ethanol; and boosting the expression of genes related to proton and potassium pumps on the yeast cell membranes also helped protect it.

All these innovations mean that yeast can produce ethanol more quickly and efficiently, with less waste product and for longer stretches of time, making it a more commercially viable process.

While there are already cellulosic biofuel plants operating in the Midwest United States, Brazil and Europe, widespread commercialization depends on being able to compete with oil prices, which are currently low. Cellulosic ethanol can also be produced by bacteria or other methods of transforming stalks and woody feedstock, with each method having its pros and cons.

Renewable-fuel mandates or other policy supports can help drive the market for biofuels and make it easier for yeast-driven processes to produce affordable biofuel.

“Everything is driven by economics, there’s a lot of other fuel alternatives out there including natural gas,” said Sato. “If petroleum prices are low, it basically makes it more attractive to continue using predominantly petroleum-based gas. But people are willing to pay extra for biofuel. It’s similar to the way we can all feel pretty good about that organic food straight from the farm.”