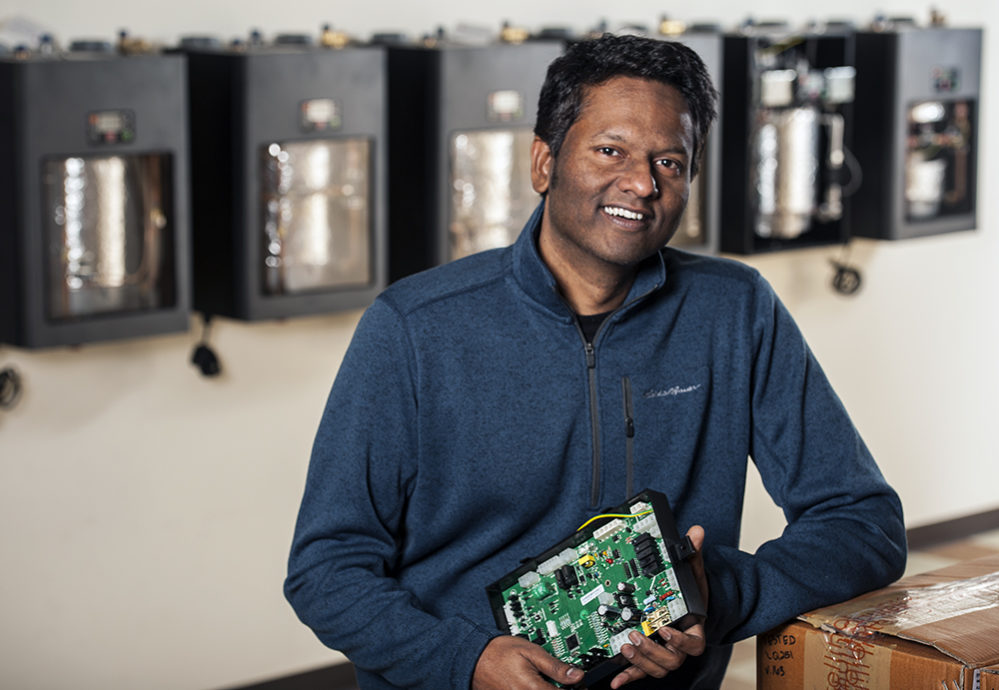 Sridhar Deivasigamani, founder of Intellihot, with a circuit board from a tankless hot water heater.

Galesburg, Illinois is a long way from Silicon Valley. There are no Google or Apple offices in the west-central Illinois city, population 32,000, but it is home to at least one scrappy tech firm reinventing how we use an everyday product.

Intellihot is the brainchild of Sridhar Deivasigamani, who in 2005 came home from a long trip to find a burst water heater had flooded his basement. Deivasigamani was up late into the night cleaning up the damage, which gave him plenty of time to reflect on the shortcomings of how homes and businesses have long consumed hot water — namely, by heating it in large tanks 24 hours a day, seven days a week.

“I [came] to realize what kind of awful technology we have,” Deivasigamani recalls of standing in ankle-deep water, “and how it’s been the same for almost 100 years.”

Perhaps there was a better way. At the time, Deivasigamani was an engineer at Caterpillar, the construction machinery company headquartered in nearby Peoria. He recruited Sivaprasad Akasam, a co-worker and self-professed “Lego master” and “robotics guru,” to start thinking about building a better water heater.

In 2009, Intellihot was born, and it began designing, manufacturing and assembling tankless water heaters for homes, businesses and industry.

Intellihot wasn’t the first and certainly isn’t the only firm to design so-called “on-demand” water heaters, or systems that heat water as it is used instead of keeping it warm on standby. But Deivasigamani and Aakasam drew on their backgrounds in robotics and automation to build “learning” into their water heater. Intellihot’s Energy Star-rated residential water heater will log occupants’ water usage and anticipate needs based on prior behavior.

That puts Intellihot in a growing field of companies redesigning household appliances for a web-enabled, 21st-century digital infrastructure. Nest built a thermostat that “learns”; Uber, Tesla and others are building cars that drive themselves. Intellihot may not have the sexy marketing campaigns and unorthodox workspaces of its Bay-area kinsfolk, but the company has the potential to be every bit as impactful.

“We reimagined the whole process,” Deivasigamani says of approaching water heating as a non-expert. “Typically people think of [water heaters] as a device [whose] only job is to heat water. But we think of it as an energy device that can heat water, that can deliver water, that can learn your patterns … and then, as a side, it could also heat your home.”

Sridhar Deivasigamani, founder of Intellihot, stands with model IQ1001. One of these units can produce enough hot water to supply 100 hotel rooms.

Intellihot’s products aim to lower these figures all while making water heaters more compact and easier to maintain. The company’s “Combi” units — a dual water- and space-heater that can heat water for up to four showers simultaneously and provide 125,000 BTUs of home heating — take up 80 percent less space than a traditional water heater and have a combustion efficiency of 98 percent, according to the company.

Intellihot has backing from Hyde Park Angels and Energy Foundry, both Chicago-based investment companies. In 2014, the company took home $400,000 when it won first place in the Illinois Clean Energy Fund Awards. The company has supplied products throughout the U.S., Canada and Mexico, and it has done it all without leaving its headquarters on the prairie. Intellihot is one of three companies working in Galesburg’s Sustainable Business Center, a business incubator aimed at attracting environmentally conscious companies to the city.

“It’s a nice, quiet, Midwestern town,” Deivasigamani says of Galesburg. He says it has a good pool of talent owing to it once being home to a Maytag plant and other manufacturing sites.

Intellihot’s products are built on-site in Galesburg, making it the only tankless water heater built in the United States, according to the company. Intellihot’s commitment to west-central Illinois is a rare antidote to today’s hand-wringing over the decline of manufacturing in rural America.

Perhaps Intellihot’s greatest challenge to date was in supplying on-demand water heating technology for 340 on the Park, a 68-story high-rise in Chicago at the northern edge of Millennium Park. The building was completed in 2007 and equipped with two traditional, tank-type water heaters located near the top of the building.

But within several years, the heaters were regularly in need of repairs and replacement was a daunting and expensive enterprise. It some cases, it meant using a helicopter to air-lift equipment to the boiler room.

Amy Eickhoff, the building manager, admits she was a bit skeptical when she first considered Intellihot as a replacement. The technology had never been used in a high-rise application before and it was unclear whether it could overcome the unique demands of circulating water through 68 floors of luxury condos.

But after her vendors were given a demonstration of the technology — and after Intellihot offered a generous guarantee that their technology would work — Eickhoff gave them the green light.

Over one night in March 2015, four Intellihot iQ 1001 units — which look like simple, sleek data-center terminals — were installed in 340 on the Park.

“The transition for us was seamless … and no one noticed a thing,” Eickhoff recalls. “It’s been great for us,” she says, and the cost savings from not having to keep stored water constantly heated has been “significant.”

The new system eliminates about 2,000 gallons of storage in the building and saves 27 percent in gas bills each year, according to Intellihot.

“Hot water tends to be a critical element in businesses, and people really want something reliable first and foremost,” Deivasigamani says. “So something that has worked OK, but may not be as efficient as it could be, people leave it alone. But they’ve left it alone, unfortunately, for a very long time.”