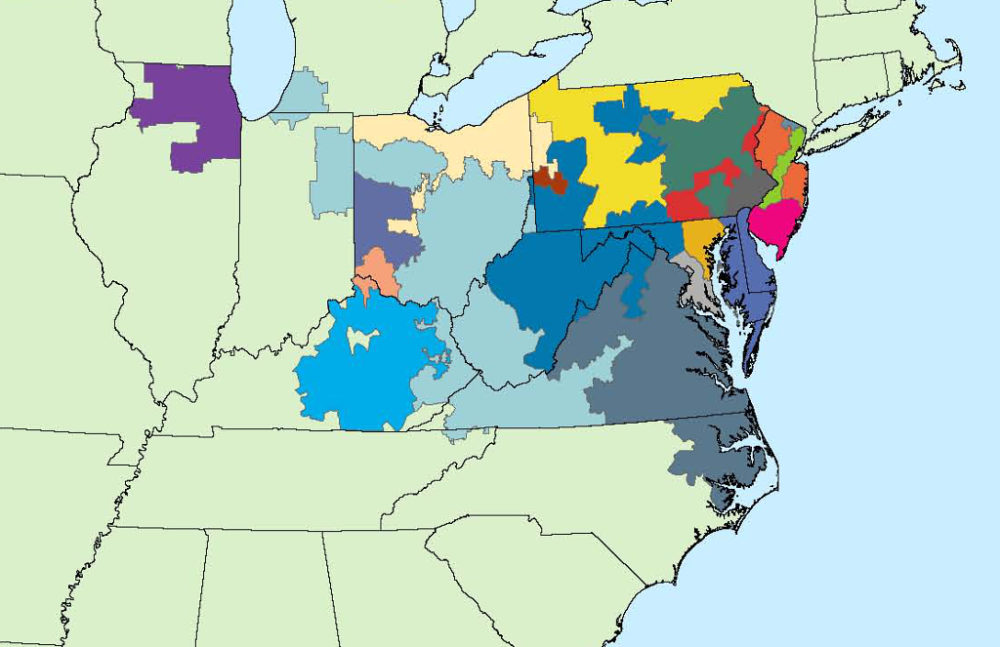 This map shows the different zones in the PJM Interconnection.

While energy storage is sometimes perceived as a technology of the future, the nation’s largest grid operator is already deploying it aggressively, leading to considerable financial savings for ratepayers.

“PJM leads in market design for fast frequency response resources, valuing the speed and accuracy of energy storage systems,” Roberts said. “This has led to substantial savings for grid operators, lowering costs for millions of customers across their territory.”

PJM leads the country in new utility battery storage deployed through the third quarter of 2016, driven by storage for frequency regulation, according to the U.S. Energy Storage Monitor by the Energy Storage Association and GTM Research.

The rules change, coupled with a decline in battery costs, led to a major increase in storage in PJM’s service area, from no battery storage in 2005 to 300 MW of battery storage in 2016, Andrew Levitt, a senior market strategist  at PJM, said in November. “We have hundreds more MW in the queue,” he added.

Federal Energy Regulatory Commission orders in 2011 (FERC 755) and 2013 (FERC 784) opened the door for utilities to pay more for speed and preciseness of energy response.

PJM saw the potential benefit of those FERC changes, often referred to as “paying for performance,” and changed its frequency regulation market with new rules in October 2012 and November 2013, Levitt said. PJM split its frequency regulation buying market into two groups: fast-responders, such as storage, and more traditional responders, such as gas-fired plants, he said. The RTO also adjusted its market to allow for a two-part offer, one for the capability of how many MW offered and the other for performance of those MW.

Those changes have led to “hundreds of millions of dollars in savings” in the PJM market, Roberts said.

The new rules result in higher compensation to resources providing faster responses when needed, Levitt said. Fast response is what storage brings to the table.

“Energy storage systems are inherently faster than traditional energy sources such as gas-fired plants,” Roberts said. “They can respond in three to five seconds, compared to three to five minutes for a gas frequency regulation plant.”

“Say the Pittsburgh Steelers lose on Super Bowl Sunday and everyone flips off the TV and decides to head to the bar,” Roberts said. “Taking all that energy off the grid can happen in an instant. In the five minutes it takes a gas frequency regulation plant to respond, the grid could be going in an entirely different direction.”

Traditional energy suppliers, such as gas-fired plants, are distance runners—able to meet a bigger, more ongoing energy need. By contrast, energy storage is a sprinter—able to quickly and precisely meet an energy need without the delays and wasted energy of longer ramp up times.

But until the FERC rule changes, utilities couldn’t pay more for a sprinter if that’s what they needed.

“The changes have served to increase competition for fast resources—not in a subsidized way, but in a fair way,” Levitt said.

PJM ranks performance on accuracy—how much the energy provided is to the requested amount; speed, how fast the energy can be provided; and precision, how close the resource output is to the current request, Levitt said.

“Pay for performance is important,” Roberts said. “If you can do it for less time, less energy, less derivation, you’re delivering more value to the system.”

With the reliably fast response from storage, energy buyers can buy less capacity to meet the same need in frequency regulation.

For energy storage, the ramp up to meet an immediate energy need looks like a plateau as compared to a mountain for traditional energy sources, Roberts said. “If you say, ‘Give me 10 MW,’ storage gives you 10 MW. It cuts emissions through the system and saves PJM money.”

Nationwide, mostly outside of PJM, 300 new MW of storage are expected to be deployed on the grid by the end of 2016, according to the ESA/GTM report.

“These systems have dropped in cost more than 70 percent in the last 18 months,” Roberts said. “Even if the systems cost 70 percent more than they do today, they can still go into the field and be successful. Now, they can be even more successful. The challenge is getting paid for the service being provided. The value, within PJM, is where the focus is for the energy storage market.”