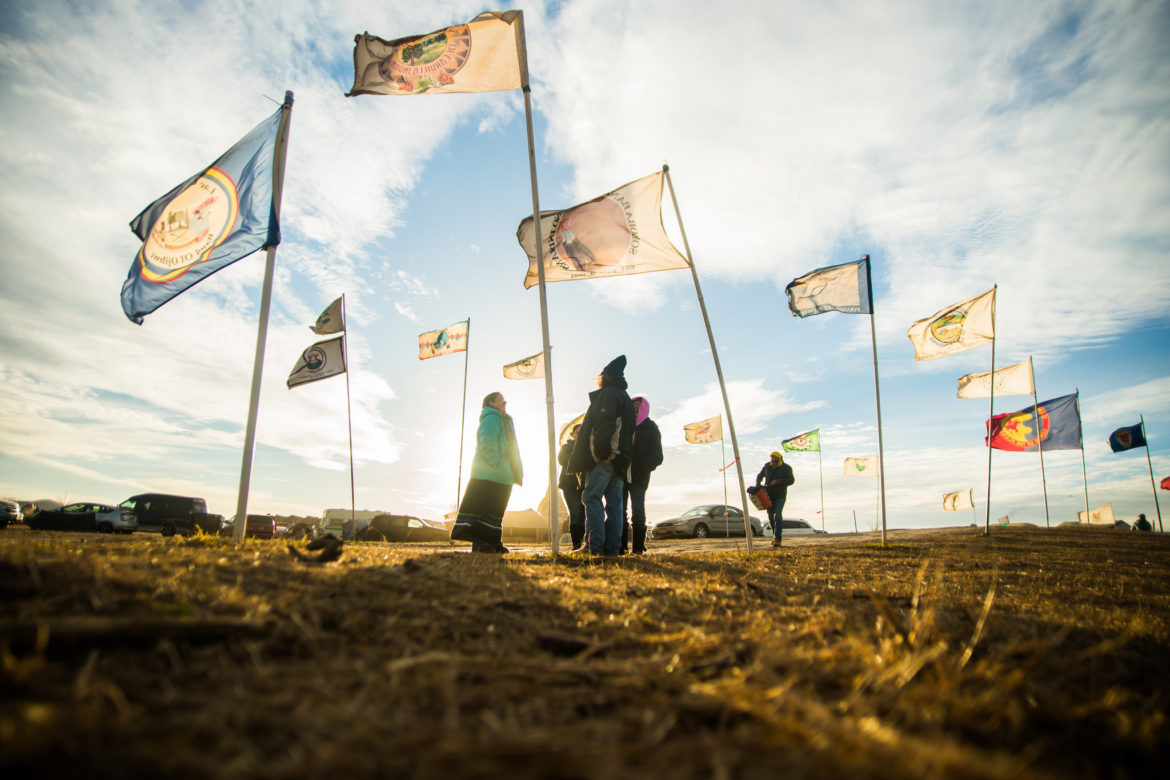 Tribal flags fly at the Oceti Sakowin camp on the Standing Rock reservation in North Dakota.

While the Sioux nation has been in the spotlight almost daily for its opposition to construction of the Dakota Access oil pipeline, it has much more quietly been pursuing renewable energy development on the Standing Rock Reservation and other tribal lands across North and South Dakota.

Seven Sioux tribes in the Dakotas are developing what would be an enormous collection of wind farms on six reservations scattered across what is generally rated as one of the windiest areas in the country.

“The ultimate vision is to develop as much as 2 gigawatts, and potentially more,” said Caroline Herron, a consultant who’s been hired by the tribes to act as a project manager. Each of the reservations “can support a couple hundred megawatts, if not more. We’re recognizing that we’ll need to phase this in. We will probably start with a couple sites with a couple hundred megawatts each.”

The tribes four years ago formed the Oceti Sakowin Power Authority, the entity that is pursuing the wind projects. The group formed a corporation, received $400,000 in grants from a couple of private foundations and has done some preliminary planning work.

Lyle Jack, who represents the Oglala Sioux Tribe on the authority’s board, said the authority hopes to have the first turbines spinning within three years. The authority intends to issue municipal or power bonds to finance the purchase and installation of turbines.

The current challenge, however, is to identify $10 million in collateral so the authority can tap into a $10 million loan guarantee approved by the U.S. Department of Agriculture. Those funds would pay for cultural and environmental surveys aimed at assessing any harm the project might cause to bird populations, archaeological sites and other sensitive natural resources in the area.

If the authority cannot gather up $10 million in collateral in the form of, say, cash and grazing rights, Jack said it will look outside the tribes. That would mean the tribes would lose some control of the project, a specter that Jack said has hamstrung their efforts in the past.

For years, according to Jack, the South Dakota tribes “have been trying to do clean-energy projects, but we all run into the same problems, such as investors wanting to come in and own the project, and to just lease the land from the tribes. The tribes want to control their own energy resources.

“We do need the jobs and revenue that this project would create, and it also coincides with our culture in taking care of the earth and climate. To us, the wind is sacred. Also, it’s giving us a chance to do our part in reducing the carbon footprint, and to help slow down climate change.”

The wind resource in South Dakota generally is ranked as one of the top five among the 50 states, and Herron said preliminary assessments indicate that all six sites “have great wind resources.” Depending on the turbines they use, she said, the capacity factor could be “well over 50 or 60 percent. They’re really great capacity factors.”

More-detailed wind studies are needed before Herron and the tribes can approach potential investors.

The Oceti Sakowin Power Authority also will need to develop additional transmission to move the power from remote rural areas to populated regions with a hankering for more power.

“It’s the biggest issue in that whole area,” Herron said. The tribes know they’ll have to make significant investments in more transmission, and have included the cost of it in their financial projections, Jack said.

Herron pointed out that other wind farms — and transmission upgrades — have been developed near reservations in Nebraska, the Dakotas and Iowa.

“The nut’s been cracked before,” she said.

The tribes also have to find buyers for their power. Jack said they’ve spoken with interested potential customers, including utilities and corporations. He said he is prevented by a legal agreement from disclosing any details.

As wind measurements yield specifics about just how good the breezes are, Herron said, she and the power authority “will be able to take that to the next level of discussion with a potential power purchaser.”

Although many details remain cloudy, she and Jack are confident that the pieces will come together.

“I think (the tribes) have gotten through the most difficult challenges already, in deciding to work together and putting together a strong relationship,” Herron said. “They’ve got great resources. The rest of it is technical challenges that any project would have. It’s nothing that can’t be worked through.”