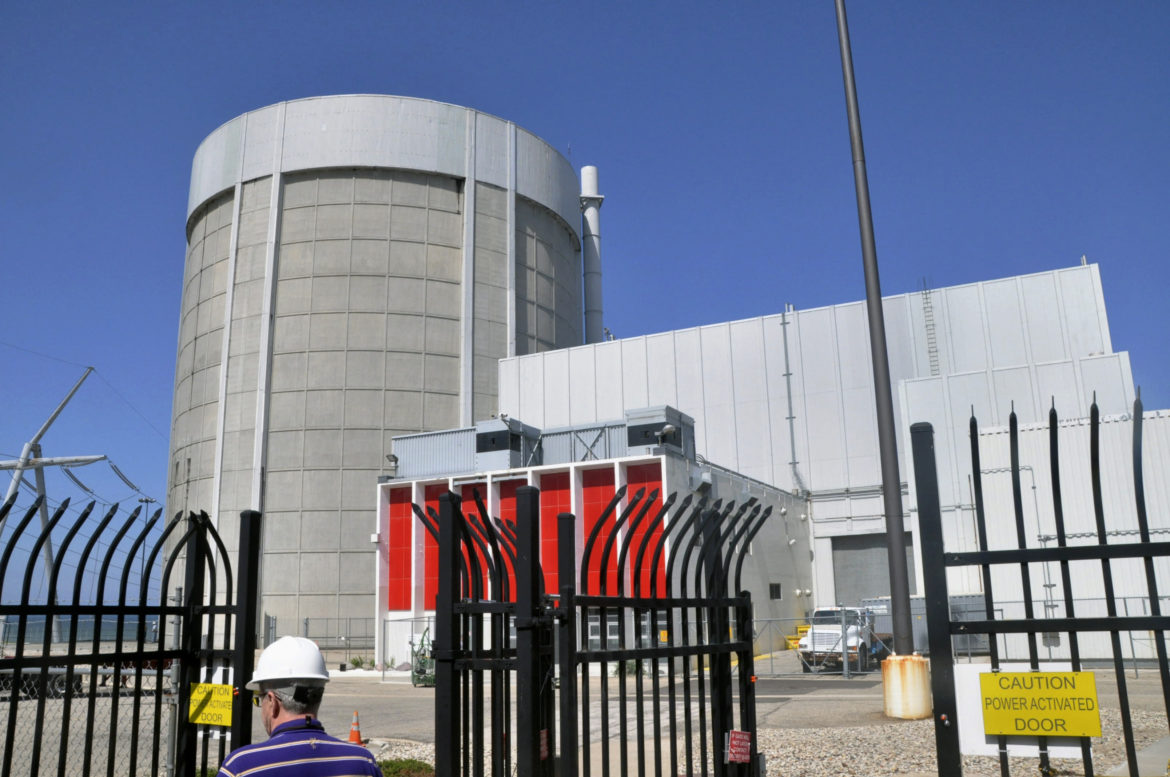 The Palisades nuclear power plant in Covert Township, Michigan in 2010.

Less than 24 hours after Illinois Gov. Bruce Rauner signed off on a plan to subsidize two nuclear plants for billions of dollars over the next 10 years, energy companies in Michigan announced plans to close one of the state’s three plants as a way to protect ratepayers.

Entergy’s decision to close the Palisades plant in 2018 — by cutting short a power-purchase agreement with Consumers Energy that was to expire in 2022 — is a strong contrast to the protracted debate in Illinois over whether to subsidize unprofitable nuclear plants there.

Unlike in Illinois, Entergy and Consumers officials have no plans to push for such a ratepayer subsidy in Michigan. They say closing Palisades, which has faced multiple safety violations over the past several years, is the more financially prudent option.

“We do not believe there would be support in Michigan for legislation that would subsidize nuclear and have no plans to push for that,” said Entergy spokesperson Patricia Kakridas.

Bill Mohl, president of Entergy’s Wholesale Commodities division, similarly told EnergyWire that it would be up to states to put a value on the emissions benefits of nuclear plants to increase their likelihood of survival. “So we’ve seen that in New York. We’ve seen it in Illinois. We certainly didn’t see that in Michigan,” he said.

Closing Palisades in 2018 rather than waiting out the rest of the power purchase agreement with Consumers “is prudent when comparing the transaction to the business risks of continued operation,” Kakridas added.

Under the proposed plan, Consumers Energy would pay Entergy $172 million to essentially buy out the remaining portion of the power purchase agreement. The 2007 agreement between the two companies committed Consumers to purchase nearly all of Palisades’ generation through April 2022. The proposal to end it early is still subject to approval by the Michigan Public Service Commission.

Consumers, a subsidiary of CMS Energy, is also expected to save its customers $172 million by terminating the contract with Entergy early. Since 2007, Entergy said Thursday that “market conditions have changed substantially, and more economic alternatives are now available to provide reliable power to the region.”

The Midcontinent Independent System Operator (MISO) also will review whether it can maintain adequate electricity supplies without the plant.

Kakridas said a detailed Post Shutdown Decommissioning Activities Report, which outlines the decommissioning process and expected costs, “will be done at the appropriate time” and is due to the federal Nuclear Regulatory Commission within two years.

Entergy faces a roughly $390 million “non-cash impairment charge” this year to close the plant early, and also roughly $55 million related to employee severance costs through 2018. Still, that’s expected to be less than the costs of keeping the plant open until the end of the existing agreement.

Sam Gomberg, energy analyst with the Union of Concerned Scientists, said there could have been an option for Consumers Energy to go back to state regulators and seek to buy electricity from Palisades at even higher above-market rates to keep it open, and thus a bigger impact on ratepayers.

A regulatory pathway could have been difficult, though, in the context of the legislative picture and policy debate in Michigan, where all branches of government are controlled by Republicans, Gomberg said. Illinois, by contrast, has a Democratic-controlled legislature and a Republican governor.

“It would have been a fight at the commission, and maybe there wasn’t an appetite for that, given the (policy debate) in Lansing,” Gomberg said. “They would have had a very difficult time pulling off something like Illinois did in terms of a bailout. There’s a large free-market contingent in the Republican Party (in Michigan). There certainly is not a legislative pathway to keep the plant open.”

While not focused on nuclear subsidies, Michigan’s own energy policy debate has continued for the past two years. The Palisades announcement stoked both sides of the argument over proposed reforms to the state’s electric choice market, a hybrid of regulated and deregulated markets that caps retail open access at 10 percent of a utility’s load.

Consumers has been pushing for reforms that, while maintaining the 10 percent cap, would place new rules and fees on alternative suppliers and customers in order to maintain reliability as coal plants close, supporters say. Illinois, by comparison, has a completely deregulated electric market. Also, nuclear generation makes up a larger proportion of the state’s generation load compared to Michigan.

“In the case of Illinois they had to pass a quarter billion dollar bailout package because that deregulated market is so dysfunctional,” he said.

“Today’s news puts an exclamation point on the need for the state legislature to protect electric reliability in Michigan,” Bishop added.

State Rep. Aric Nesbitt, the Republican chairman of the House Energy Policy Committee who has helped steer the policy discussion in Lansing, criticized Entergy on the announcement both for potential job losses and for putting adequate energy supplies at risk. In early proposals, Nesbitt — who is term-limited at the end of the year — sought to return Michigan to a fully regulated market.

Critics disagree on the reliability concerns, and say the Palisades announcement was a calculated move to build support for the proposed bills in Michigan. The state House has one more week of session before the end of the year, while the Senate has two.

The Palisades announcement is “more than suspiciously coincidental,” Rick Coy, chief legal counsel for the Association of Businesses Advocating Tariff Equity (ABATE), said during a conference call with reporters Thursday. He said it was not particularly surprising that Palisades would be shutting down before the 2022 power purchase agreement expired, citing a June 2016 UBS report saying how uneconomic the plant was and that cheaper alternatives exist.

The Illinois legislation “had to do with a couple specific nuclear plants that were proven to be uneconomic and the legislature decided to subsidize those,” Coy said. “It’s interesting that here’s a nuclear plant and, rather than trying to subsidize it, the owner and Consumers Energy decided to basically end the deal and get out of it.”

Bishop denied that the announcement was coordinated with Illinois lawmakers’ efforts to reach an energy deal in the remaining days of the lame-duck session. He said Entergy approached Consumers “several months ago” about a plan to end the power purchase agreement early “in a way that benefitted Michigan.”

Bishop said Consumers has a “comprehensive, sound plan” to maintain reliability for its 1.8 million customers if and when the 811-megawatt Palisades plant closes.

“That includes our own generating plants, including the $800 million expansion underway at the Ludington pumped storage plant, gas plants, adding more renewables, such as our Cross Winds II wind park in Tuscola County, and another wind park being developed in Huron County by a third party,” he said.

Michigan Gov. Rick Snyder said in a statement Thursday: “I’m certain the Michigan Public Service Commission will look at this very closely and examine the implications for the reliability and affordability of electricity in Michigan, as well as protection of the environment.”

Observers also say the Michigan situation differs from Illinois in preparing local communities for the potential economic losses by closing a nuclear plant. Palisades employs about 600 people, while the Illinois communities of Quad Cities and Clinton also braced for significant losses if Exelon’s plants would have closed there.

While there is still concern locally, Entergy and Consumers Energy Foundation plan to provide $8 million and $2 million, respectively, over several years for economic development in southwest Michigan, which would be distributed by local stakeholders and “focus on sustainable economic development that will broaden the community’s tax base,” Entergy said.

Entergy also intends to help Palisades employees relocate within the company, while Consumers will consider “potential placement of up to 180 appropriately skilled employees from Palisades into the utility’s workforce over time.”

Snyder said the proposed community contributions “would be vital. We need to make sure we use the next two years to wisely plan the use of state and local resources to adapt to whatever decision is made.

“We cannot wait for that decision to start preparing the community and its residents for the potential loss of Palisades. … We need to ensure that if this closure occurs, the state is ready to help the employees transition to new opportunities when appropriate. We also will put economic development efforts in place to help the entire region and assist local governments with their transition plans.

“No matter what the eventual decision is, it is important that we do everything to help the region adapt to a potential future without Palisades. The responsible thing to do is put a plan into action now to help our neighbors in Southwest Michigan prepare for a significant change in their communities.”

Dave Kraft, of the Chicago-based Nuclear Energy Information Service, said this commitment is in stark contrast to what Clinton and Quad Cities faced while Exelon was considering closing plants there.

“Nuclear plant closures in Illinois or anywhere else requires the establishment of a just transitions fund to be set up and ensure community services are not disrupted by capricious closures,” Kraft said. “Unless you have something in place proactively, as a buffer, communities will suffer and serve as human shields by the utility. That’s exactly what happened to people in Clinton and Quad Cities. The legislature failed those people in advance by not having these just transitions in place before Exelon made the announcement.

“Our question is if Gov. Rauner really wanted to bail something out, why not bail out the communities that would have been damaged? It’s setting a very horrible precedent.”

Jessica Collingsworth, another energy analyst with the Union of Concerned Scientists, worked closely on the Illinois situation. At “every public meeting,” she said, local chambers of commerce, school districts and local businesses were pushing for the subsidy to avoid major local impacts, including the loss of tax revenue.

She said while these transition plans were part of the discussions with Exelon, and will likely become an issue again in 2030, “Honestly it wasn’t something Exelon was willing to put in the legislation, and so it’s not in there.”

Kraft believes the outcomes differed in Michigan and Illinois due to Exelon’s significant influence at the state Capitol. Politics, he suggested, is a major driver behind the fate of these nuclear plants.

“Exelon is a formidable political force to deal with,” Kraft said. “Perhaps (Entergy) read the tea leaves that it wouldn’t get a bailout like Exelon has orchestrated in Illinois.”