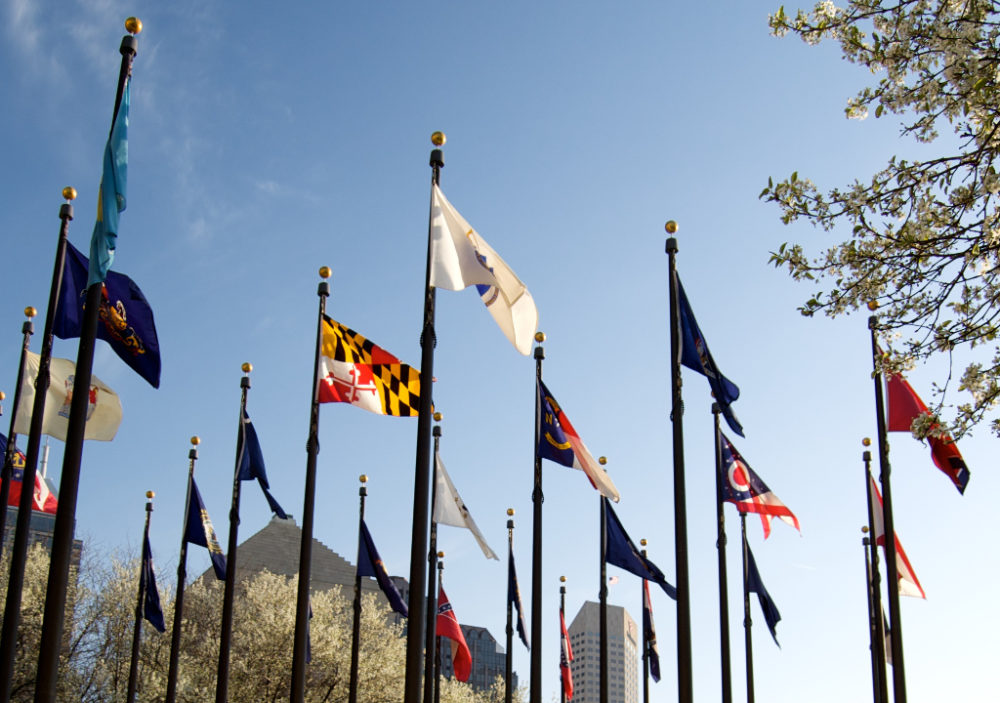 Despite President-elect Donald Trump’s outspoken denial of climate science being reflected not just through his words but his appointments, there is growing sentiment that the country’s energy future will be decided largely at the state level and by markets, relatively independent of Trump’s positions.

This indicates that regulations, government programs and market forces that curb fossil fuel dependency are not necessarily harmful to the economy, as opponents frequently argue. And, the study authors say, state policymakers should take this to heart while charting their states’ energy futures — which may not, as previously expected, be driven by compliance with the federal Clean Power Plan.

“This election and basically the victory of Trump has raised a lot of uncertainty about what’s going to be the direction of the federal government on issues of climate and energy policy,” said study co-author Devashree Saha, senior policy associate at Brookings.

“At the state level, entities have implemented a lot of progressive climate change policies, a lot of creative and innovative experiments. In the new political reality where signs point to the fact the federal government is going to abandon the ship, so to speak, on energy and climate, the state role is going to become even more critical.”

She noted that in addition to setting energy policies, states also have much control over land use and transportation plans that relate to power generation and carbon emissions.

“States are really crucial actors in the carbon drama, much more than the federal government, which is a good thing,” Saha said.

The Brookings study found that at least 35 countries including the U.S. and more than 30 U.S. states have successfully “decoupled,” with carbon emissions falling while real GDP grows. North Dakota led the states in the extent of its decoupling, although North Dakota’s economic growth is largely fueled by oil extraction that leads to carbon emissions elsewhere.

Midwestern states were mostly towards the bottom of the list in terms of their decoupling progress, largely because coal power is still prominent in the Midwest. The Midwest gets 61 percent of its net electricity generation from coal, as opposed to 17 percent in the Northeast and 38 percent in the South, according to Brookings’ analysis. “These are pretty staggering numbers,” said Saha.

But despite Trump’s promises to the coal industry, coal plants are expected to continue closing in coming years, as the market drives a switch to natural gas.

“Even if the Clean Power Plan is slowed down or even killed, this is a market trend that is probably not going to be reversed because coal is no longer cost competitive with cheap and abundant natural gas,” said Saha.

Solar and wind under Trump

The Brookings authors said they were surprised to find that renewable energy actually did not play a notable role in decoupling at the state level.

“Even though the Midwest states like Iowa and Kansas have seen significant wind energy development, it’s possible the heavy reliance on coal is just warping any positive contribution from wind,” Saha said. As wind and solar power proliferate, the decoupling effect could be magnified, she hopes.

“For states to continue the decoupling momentum, it’s important they are able to deploy renewables at an accelerated pace,” Saha said. “Federal policy can play an important role here too, tax credits for solar and wind. It would be really nice if both are kept in place, our hope is the next administration doesn’t completely take them out.”

Dan Whitten is spokesman of the Solar Energy Industries Association, a national trade group. He doubts the administration will try to roll back the Investment Tax Credit which is crucial to solar development, though it could be reduced or eliminated as part of larger tax reforms that Trump has promised.

“The benefits solar energy brings in terms of jobs, economic activity, national security and personal choice all are things President-elect Trump has espoused,” Whitten said. “One of Mr. Trump’s strongest constituencies are those independent-minded people who really want to make their own choices, and among the most endearing qualities of solar is that it allows people to choose their own source of energy.”

Despite Trump’s personal antipathy toward wind turbines, many wind developers are confident their industry will continue to compete on price. Construction of wind turbines creates jobs for tradesmen in rural areas and lease payments for farmers, both populations prominent among Trump supporters.

“We are a business constituency that lawmakers want to see thrive,” said Kevin Borgia, public policy manager of Wind on the Wires.

Indiana is known as a state where policymakers have supported fossil fuels and gutted clean energy programs, including during the governorship of Vice President-elect Mike Pence.

But even with state-level hostility to clean energy, individual cities including Indianapolis and Carmel have managed to implement clean energy and energy saving programs — perhaps a microcosm of how clean energy can thrive on local levels even with a climate change denier in the White House.

A recent study by Indiana Advanced Energy Economy, a state affiliate of the national Advanced Energy Economy business association, found that almost 48,000 workers were employed in advanced energy jobs in Indiana in 2015. Three-quarters of them were employed in the energy efficiency sector, which inherently helps drive the reduction of carbon emissions. “Advanced energy” also includes renewables, smart grid technology and cleaner transportation fuels.

More people are employed in advanced energy than in the machinery sector, the study found, and the number is not far below state auto parts manufacturing employment. Employers reported they have difficulty finding enough applicants with the right skills and certifications, meaning job training programs could yield more employment.

Greg Ballard was the Republican mayor of Indianapolis until 2015, and since declining to run for a third term he has focused his attention on alternative fuels and energy security. Ballard is a Fellow with Advanced Energy Economy and the association’s CEO, Graham Richard, was mayor of Ft. Wayne from 2000 to 2008 and also served on the state’s public utility commission.

Ballard said mayors have political power that goes beyond their official job description, allowing them to influence state and federal policy and corporate behavior.  Meanwhile, he said, Indiana legislators have become more receptive to clean energy policy, and the state’s reliance on coal has been reduced in recent years.

“The state House is changing,” he said. “They are a little protective of some [fossil fuel] technologies, but they see the writing on the wall. We want to make sure the state of Indiana knows advanced energy is the wave of the future.”

“Market drivers are critical to the growth of advanced energy, whether energy efficiency, solar, wind, storage, advanced technology,” added Richard. “The driver for change in Indiana is companies like GE, Johnson Controls, Lockheed Martin, Comcast saying we believe in energy efficiency and we want to be able to purchase it, and removing regulatory barriers.”

The law firm Bracewell, known for representing fossil fuel interests, convened experts for a briefing after the election. They said Trump likely will relax regulations, promote oil and gas development and ignore the U.S.’s promises under the Paris agreement, and that his administration will likely mean the death of the Clean Power Plan.

Still, they indicated Trump’s administration might not behave how the fossil fuel industry hopes or expects. Bracewell attorney Scott Segal noted that Trump spoke in favor of ethanol supports in Iowa.

“There’s a freedom in the Trump administration to take policy positions that are not necessarily doctrinaire or even particularly conservative if it should meet the interests or tickle the fancies of the incoming president,” said Segal.

Nancy Loeb is director of the Environmental Advocacy Center at Northwestern University’s law school. She calls Trump’s election “a great tragedy” for the battle against climate change, but echoes the idea that market forces and state policy will continue pushing in the direction of decarbonization and clean energy development in the U.S.

She said this will likely be particularly true in Illinois, thanks to the massive energy bill Gov. Bruce Rauner signed last week fixing the state’s RPS, promising subsidies for nuclear plants and creating a sweeping solar program.

“What might change [under Trump] is some of the restrictions on how coal is mined, that might conceivably lower the price of coal somewhat,” Loeb said. “But I’m skeptical that much will happen to affect coal, really.”

Regulated states may be able to keep their coal plants open longer because they can pass the costs on to ratepayers, a question that is determined by state public utility commissions. Meanwhile Loeb said the ongoing switch to natural gas could boost another sector that may be good for the economy but problematic for the environment and local residents: the mining of frac sand in Minnesota, Wisconsin and northern Illinois. A Trump administration is unlikely to rigorously enforce any federal laws that limit either fracking or frac sand mining.

“If there is really significant new fracking at a high level, [frac sand mining] may again take off,” Loeb said. “There will be very significant loss in Illinois of very valuable farmland and a lot of environmental effects in Wisconsin and Minnesota.”

Loeb concluded that the U.S. needs to embrace renewable energy to be globally competitive and a world business leader — the exact goals that Trump claims to champion.

“Everything we’ve seen him do so far has looked toward the past, trying to recreate the past,” she said. “What I hope he will do is gain a much greater understanding of how markets are changing, how production is changing, how energy needs are changing around the world, so our policies become much more forward-looking.

“So it’s not just making America great again in the way it was in the past, but making sure America does things that allow it to be great going forward.”