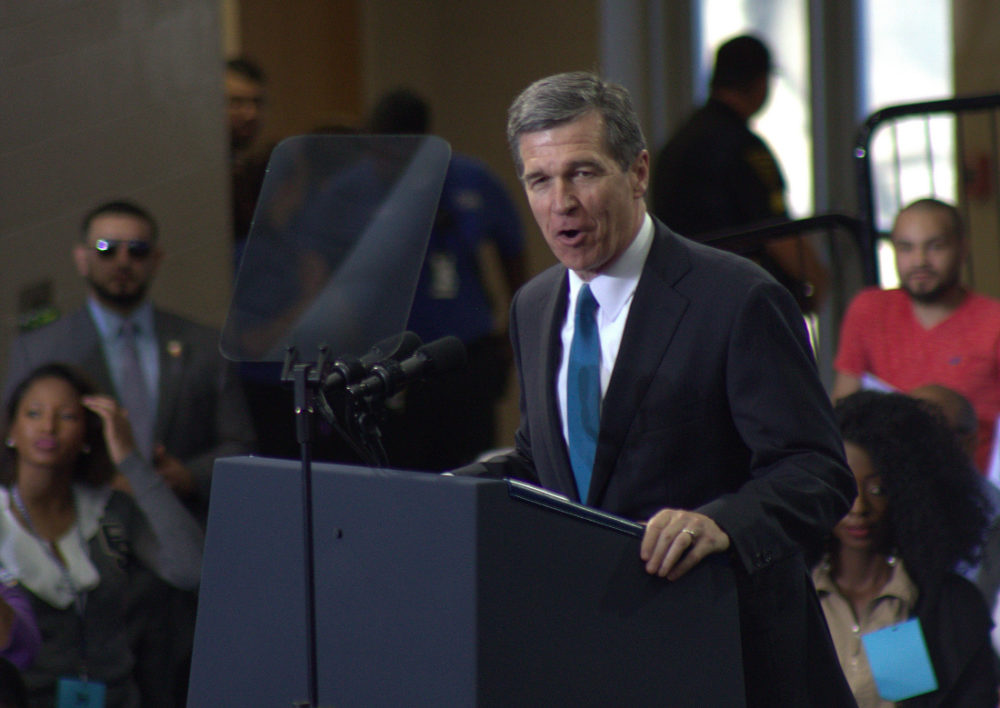 Among his many new responsibilities next year, North Carolina Governor-elect Roy Cooper will oversee the state water quality permit for the proposed natural gas Atlantic Coast Pipeline, poised to cross more than a dozen major rivers and streams from the Virginia border to Robeson County.

While few expect the new governor to reject the pipeline’s water quality certification outright, advocates are counting on him to scrutinize the project more heavily than his predecessor might have.

And in a potential role reversal, the state’s executive branch could provide a counterweight to a federal administration many fear will be hostile to the environment under President-elect Donald Trump.

“There’s definite authority there,” said Heather Deck, Pamlico-Tar Riverkeeper, “to have [the Cooper administration] be a major player in the outcome of the pipeline through North Carolina.”

Mussel in a coal mine

Under section 401 of the federal Clean Water Act, North Carolina must certify the natural gas Atlantic Coast Pipeline will not “degrade” rivers, streams and wetlands protected under the law or “violate State water quality standards.”

Federal wildlife officials also must ensure the project doesn’t harm endangered species, while the U.S. Army Corps of Engineers must issue a separate water quality permit under section 404 of the Clean Water Act.

These officials are most concerned with the pipeline’s construction process, which can interrupt or permanently alter water flow, damage vegetation on the shoreline, and fill water bodies with excess dirt.

Those activities, scientists say, are especially problematic for the many rare, threatened and endangered mussels, salamanders and crayfish that live in the creeks and streams in the pipeline’s proposed path.

Several, like the Neuse River Waterdog, a brown, spotted salamander with a red tufted collar, are found only in North Carolina. Some, like the tiny, caramel-colored Tar River Spinymussel, are also on the brink of extinction.

“Of the four currently known populations of the Tar River Spinymussel,” the U.S. Fish and Wildlife Service wrote in a June 2 letter, “this [pipeline] project, as currently proposed, will adversely impact three of them.”

While few North Carolinians would notice, much less mourn, the demise of such an obscure animal, Deck, the riverkeeper, said the mussel is a “canary in the coal mine.”

“If we don’t have waters that are clean enough for these very sensitive species to survive, that’s an indicator that we’re affecting our own drinking water quality,” she said.

‘Invited to sit at the table’

The June 2 U.S. Fish and Wildlife Service letter was part of the push and pull between state and federal environmental officials and the pipeline company, which occurs well before any permits are issued or the Federal Energy Regulatory Commission (FERC) gives its approval.

“The environmental review process for this project has [been] and will continue to be the most thorough process we’ve ever conducted,” said Aaron Ruby, a spokesman for Dominion Transmission, the company building the pipeline.

Advocates say Cooper – who was captured on video saying he “doesn’t like” fracking and natural gas – can play a key role in that process by reopening lines of dialogue closed under Gov. Pat McCrory.

“Hopefully we can actually be invited to sit at the table to talk about the negative impacts these pipelines have on our environment and our water resources,” said Matthew Starr, Upper Neuse Riverkeeper. “Because right now we don’t have a seat at the table.”

Cooper officially became governor-elect only last week, and has not yet named a chief for the state’s Department of Environmental Quality (DEQ). Even so, advocates like Deck are optimistic.

“I trust and believe there will be a recommitment to transparency and communication by the new DEQ, which has not been there in the last few years,” she said. “That will make the process better, and it will result in a better outcome.”

For example, federal wildlife officials say they don’t know what will become of requests for new federal endangered species listings for the Neuse River Waterdog and five other animals along the pipeline’s route, given the president-elect’s antipathy to new regulations.

“I don’t know if we’ll be told we can’t list anything,” said Sarah McRae, a biologist with the Raleigh field office of the U.S. Fish and Wildlife Service. “There’s a lot of speculation and we’re very nervous about it.”

The Cooper administration could protect these animals through its state water quality permit, the scope of which can be much broader than the federal water permit, experts say.

“If you’re talking about changes in [water] flow and filling activities that might affect an endangered mussel,” said Robin Smith, a former assistant secretary for environmental protection, “you’ve got that tie-in to water quality.”

Smith is serving on the Cooper planning group for DEQ, but declined to make any predictions about the pipeline specifically. She did say that state and federal officials typically strove to coordinate closely leading up to the issuance of water quality permits, “so you don’t end up with a dumpster fire at the end.”

The steps to avoid such conflict are iterative. First, Dominion must try to avoid impact on sensitive streams entirely. If avoidance is impossible, then it must work to minimize the pipeline’s impact. Finally, the company is required to mitigate its damage by restoring a stream or wetland elsewhere.

“Avoid, minimize, mitigate, is the process set up,” said Smith, who also writes a blog on state environmental policy.

In an example of avoidance, Dominion has agreed to move the route away from Buffalo Creek, near Smithfield, home to the federally endangered Dwarf wedgemussel.

As for minimization, scientists say the pipe generally should be buried tens of feet beneath the waterway using a technique called horizontal directional drilling where crossings are unavoidable. According to documents Dominion submitted to FERC in October, the technique will be used for as many as seven of 13 major creek and river crossings in the state, including the Neuse River, the Cape Fear River, the Tar River, and the Roanoke River.

The river crossing plans remain in flux, but at present they don’t include horizontal directional drilling for two tributaries to the Lumber River, considered central to community and tribal life in Robeson County.

That’s a concern, says Christine Ellis of the Winyah Rivers Foundation, whose territory includes the Lumber River. “In our case, we don’t have the pipeline crossing the main stem of the river, but we do have it crossing many, many miles and acres of wetlands that are important to the river.”

“We don’t want any sort of contamination… into the Lumber River, which is very important for the Lumbee people,” said Ericka Faircloth, an indigenous person with family roots in the county, who works with Clean Water for North Carolina.

For anti-pipeline activists like Faircloth and Ellis, the potential for water contamination is just one reason among many to fight the project, and Cooper’s role in approving its water quality permit just one more tool at their disposal.

“Our ultimate goal is to stop it,” said Ellis.