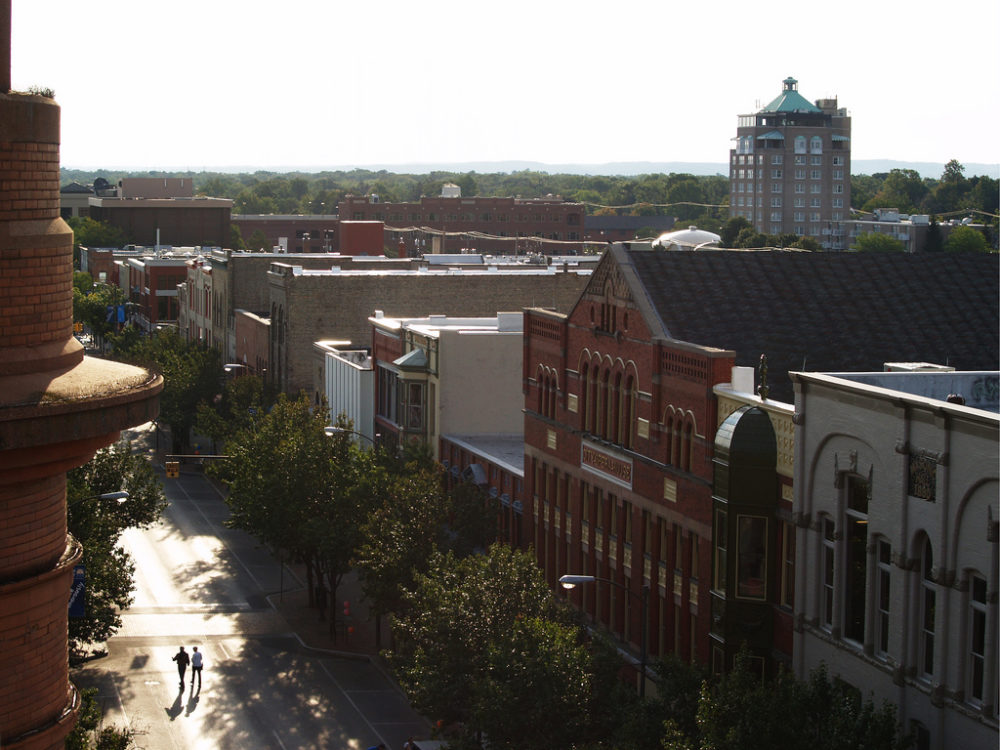 Traverse City Commissioners unanimously approved a resolution to set a goal of 100 percent renewables by 2020 to power city services, such as streetlights, a wastewater treatment plant and government buildings.

“It seems like one of the right things to do with a changing climate and changing aspects of our energy production,” Traverse City Mayor Jim Carruthers said prior to Monday night’s vote.

Traverse City joins Grand Rapids, which has a 100 percent renewables goal by 2025 to power city operations, and Northport, which is also in the northwest Lower Peninsula and has a plan to power the entire community with renewables.

It’s as of yet uncertain how the city will eventually meet the goal. Monday’s resolution reactivates a “green team” to study the issue further.

Kate Madigan, climate and energy specialist with the Michigan Environmental Council who has worked closely on the proposal, said the city’s needs account for about 3.5 percent of the municipally owned Traverse City Light & Power’s load, or roughly 11,500 megawatt-hours annually.

Renewable energy is defined in the resolution as wind, solar, geothermal or landfill gas, and energy efficiency can also be accounted for. The resolution also directs a team to develop a plan for the city to become carbon neutral by mid-century.

The city could encourage the utility to build new generation, or the city could buy into a new project or build its own, Madigan said. She added that another “big piece” of the plan is to move forward with the city’s climate action plan adopted in 2011 and “setting more modern goals of where we need to be.”

“We’re talking about climate change, an urgent issue, so we want to be moving as quickly as we can in this transition to clean energy,” Madigan said.

According to its website, TCL&P gets 43 percent of its electricity from coal, 9 percent from natural gas and 37 percent through the Midcontinent Independent System Operator’s market. The remaining 11 percent comes from renewables, which is expected to increase to 15 percent as the result of a new power purchase agreement for 3.6 megawatts from a wind project in Michigan’s Thumb region.

Carruthers said the community has been “reasonably progressive” when it comes to renewable energy. In 1996, the municipal utility installed the first utility-scale wind turbine in the state, which was paid for by customers who opted into the program. TCL&P also participated in a pilot project with Cherryland Electric Cooperative to build the state’s first community solar project just south of town in 2013.

Carruthers said he helped lead an effort in 2010 to set a 30 percent renewables goal for the city utility by 2020. The plan depended heavily on biomass, though, and proved unsuccessful after opposition from the community. The utility ultimately shelved that plan.

“We’re just trying to meet the needs of the citizens, the needs of the growing community, and support and protect natural resources around us which make Traverse City so unique,” Carruthers said.

Amid uncertainty over the direction of federal policy and a new statewide renewable energy mandate of 15 percent, Madigan says cities play a crucial role in advancing clean energy. About 20 U.S. cities have 100 percent renewable energy targets, she said. Local officials in Madison, Wisconsin, were also scheduled to vote Monday on a similar plan.

“When we take a step back and look at climate change to avoid the worst consequences, scientists are telling us we need to phase out of fossil fuels entirely by mid-century,” she said. “Cities can help shift the culture so there is more support for renewable energy at the state level and around the country.”