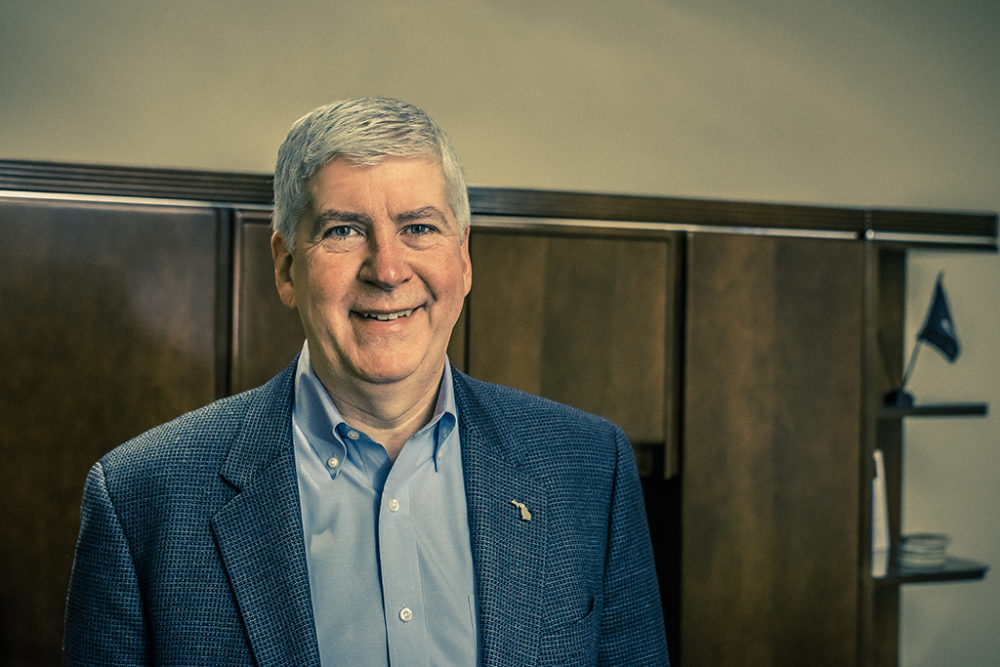 In the waning hours of the Michigan legislature’s 2016 lame-duck session, Gov. Rick Snyder’s administration played a key role in ensuring that major energy reforms that were two years in the making crossed the finish line.

In fact, Snyder helped broker a deal which initially might have narrowly passed in his view, but ended up gaining widespread support in the Republican-controlled legislature.

“This was one of the finest illustrations of good, bipartisan and broad-based work I’ve seen in my time as governor,” Snyder, also a Republican, said in an interview with Midwest Energy News on Dec. 21, the day he signed the bills into law.

The rest of 2016 wasn’t so easy. In July, advocates criticized Snyder for appointing former BP lobbyist Heidi Grether to lead the state Department of Environmental Quality. The Sierra Club even called on Grether to recuse herself from decisions over the controversial Line 5 oil pipeline in the Straits of Mackinac, a topic likely to persist in 2017.

In the interview, Snyder further discusses the balance of adding renewables and natural gas to the state’s energy mix, addresses concerns about an over-reliance on natural gas and shows interest in the “increasing viability” of solar power.

The following was edited for clarity.

Midwest Energy News: What was your approach with lawmakers heading into the last day of session to reach a compromise on the energy bills?

Snyder: The main parts of the package had agreement in a broad, bipartisan fashion. What we found in the end was that it wasn’t about partisanship, it was more about two different interest groups. We have 10 percent choice in our state, and (one side) wanted to ensure we kept that or made it better. Then we had the regulated industry saying they had 90 percent, how could they make sure they were addressing their issues?

They’re almost on polar opposites of the spectrum, so the question is: Could we find a compromise and get everyone to agree that this was good legislation that allowed them to co-exist? We really went into the last day having a situation with the choice people and regulated industry people all coming together to support this.

So were the bills in trouble of not passing without last-minute discussions?

It would have been more challenging. We would have had to do it with someone perceiving they didn’t get what they were looking for.

This is the way legislation should work, with good compromise and people understanding they can find common ground. This was one of the finest illustrations of good, bipartisan and broad-based work I’ve seen in my time as governor.

The other side of the debate was over the future of clean energy development in Michigan. Elsewhere in the Midwest, we’re seeing Republican legislatures going after renewable and energy efficiency standards. That had also been the intent of Michigan Republicans — to move to voluntary goals. Where do you stand on mandating clean energy?

I think we’ve taken a really great approach in Michigan. The real priorities that came of this were: How do we really set up a framework for success and make it adaptable, because there are things we don’t know into the future. What we do know is that we have all of these aging coal plants that should be retired, both from a cost and an environmental perspective. And looking ahead, we know we need cleaner sources of energy and that are affordable and reliable.

One big piece to me is I think we’ll be a leader on eliminating energy waste. Too often people spend all of their time talking about where generation comes from and don’t talk about the fact that the best energy is the energy you never have to use.

There is growing evidence that the clean energy sector has economic development and job potential as these coal plants retire. Why do you think that wasn’t a larger part of the discussion while these bills were debated?

I think you find with a lot of citizens and most industrial people is: What is the affordability, what is the reliability (of clean energy)? Those are key constraints you have to answer first and then you can get into economic development. Some of it is interesting — it’s great to see the increasing viability of solar in Michigan, and I think you will see solar grow. That will be based on a good marketplace. It has become more efficient and the cost of it keeps going down.

Yet there is also concern that major utilities in Michigan are mainly focused on building and owning new natural gas plants. Going forward, are you concerned about an over-reliance on natural gas, the volatility with gas prices and with making such large capital investments?

Couple of things: Our Michigan Public Service Commission is really empowered to look at those balances, and they do an outstanding job. We’ve got the experts looking at this, helping to manage the portfolio in some fashion and providing good guidelines for people to work within.

We just talked about solar and it becoming cost efficient and a natural choice. When you look at natural gas, I’m happy to say Michigan is a pretty good natural gas state. We’re not a huge producer, but we’re a producer of natural gas. If you’re doing a utility plan, and I don’t think they’ll be on the spot market, hopefully they are doing longer-term contracts and locking in stable pricing and things you’d see someone do naturally if you’re a user of that resource.

The major utilities played a big role in policy discussions and are generally major lobbyists in Lansing. Throughout the process, many felt the energy bills catered only to their needs. In a regulated state, how much should these companies be providing public benefits in return for market guarantees they receive?

Generally I’ve seen them be good corporate citizens in terms of trying to do good things.

To the question about their role here in Lansing, as an illustration when working on the compromise, I told both sides: I appreciate each of you have your own interest and why you want to see this outcome, but that’s not my interest. My interest is the citizens of the state of Michigan and my role is to get the best answer for them. That’s why you all need to compromise and need to come to common ground so the citizens of Michigan are the winners in this.

You’ve focused your attention on finding a solution to the energy crisis in the Upper Peninsula, yet there are still concerns there that the proposed plans have been top-down and largely don’t account for the potential of distributed, renewable generation there. What’s your response?

I think there are some opportunities there. We’ve been as proactive on U.P. energy as any administration has been for decades. I view it as a bigger crisis than we had in the Lower Peninsula, and we’ve spent a lot of time and resources working to solve the problem. We were leaders in helping get rid of the surcharge up there, we were the leaders in getting people to the table to get a new generation plant.

If you go to the question of looking at renewables for the long term, we should be open to that. The challenge we have to address there first is a base load problem, then we can talk about more variability in terms of renewables.

The other is connectivity. I’m the one who asked for the MISO study about connecting the peninsulas or to Ontario. We’re going to work through the generation, transmission, distribution and, again, I want to see things like energy waste elimination and on-bill financing happen in the U.P. All of these are things that can help people throughout Michigan.