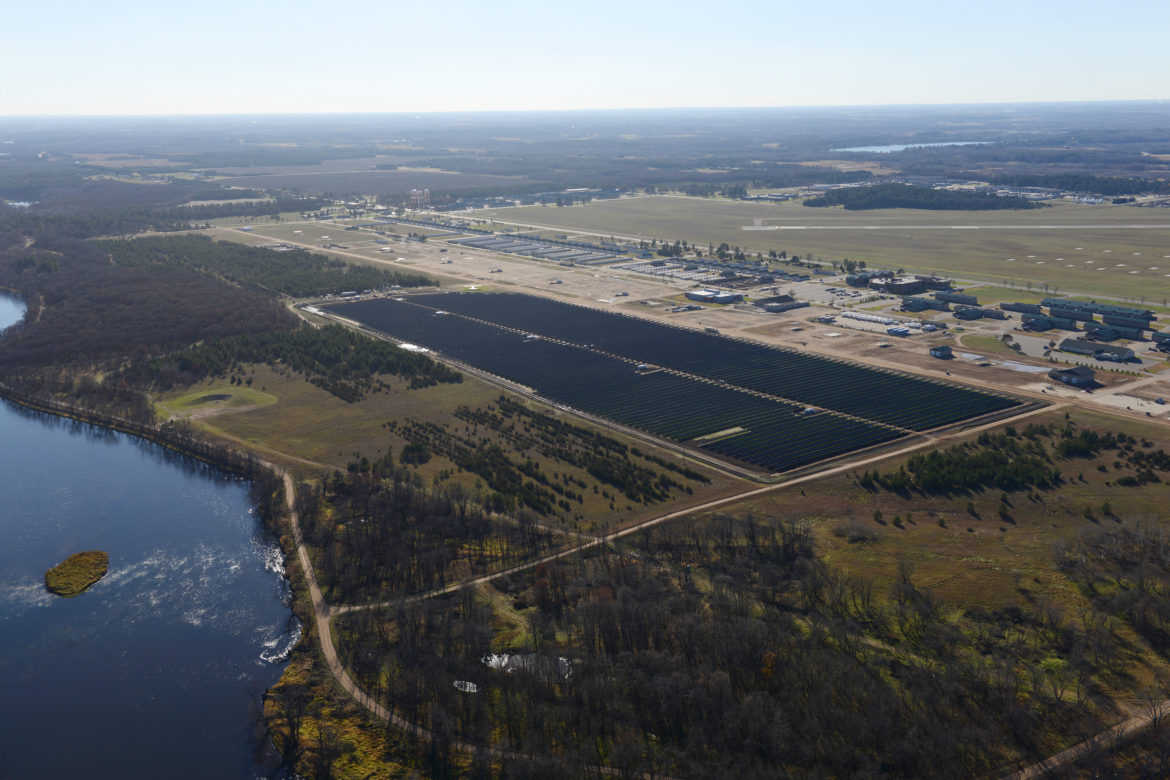 At the Minnesota National Guard’s Camp Ripley base, a sprawling 10 megawatt solar array is the most visible indicator of the organization’s commitment to eventually reaching net zero emissions.

The Minnesota National Guard also has several geothermal systems operating at Camp Ripley and other facilities. It’s looking to save water and reduce waste dramatically by composting and changing over to compostable plates and silverware.

“Our long term goal is to generate as much energy as we consume,” said Seth Goreham, environmental program manager. “The 10 megawatt system takes us a big step toward that. I think (net zero) is achievable but it will take some time and creative thinking on the part of multiple parties.”

Goreham credits the Minnesota National Guard’s leader, Gen. Rick Nash, with putting sustainability in the forefront of the organization when he took over in 2011.

“Creating a sustainable infrastructure has been one of my six priorities while serving as Adjutant General,” Nash said in a prepared statement. “If we invest in a sustainable infrastructure, our facilities will be more economical and environmentally sound. This will ensure our facilities will remain viable for our soldiers and airmen as well as the communities we work, live and play in.”

The Army recognized the Minnesota National Guard’s work in 2014 with an environmental quality team award. A press release cited the Guard’s online training courses, water use reduction goals and 18 percent decrease in energy use.

“I’m really impressed with what the Guard’s done in Minnesota,” said Kate Knuth, who runs the Boreas Environmental Leadership Program at the University of Minnesota’s Institute on the Environment. “They have decided this is a priority in their mission and their leadership. And they’re making it happen. I think it’s great.”

The Minnesota National Guard has more than 11,000 soldiers with facilities in 63 communities, from fast-growing suburbs to rural areas. It has had a sustainability team working on plans with state officials for years while making progress in several areas.

For years military leaders have sought to reduce the use of energy in the Defense Department, the largest single consumer of energy in the world. By 2020 the Army alone wants a gigawatt of renewable energy.

Most of the sustainability program so far has happened at the 53,000 acre state-owned Camp Ripley in northern Minnesota. Another 1,500 acre site in Arden Hills, a Twin Cities suburb, has also seen several projects involving energy saving technology.

At Camp Ripley the $26 million solar collaboration with Minnesota Power, a subsidiary of Duluth-based Allete, Inc., was delayed after damage from a storm earlier this year destroyed many solar panels before they even began producing power. The panels should be generating electricity next year.

The solar array will be owned and operated by Minnesota Power. The Guard leased the land to the utility, which is its electricity provider, said Goreham.

Under a unique arrangement the Guard will be able to use energy directly from the solar installation in the event of a power outage, he said.

Another advantage to the Minnesota Power deal, he added, is that the Guard receives the renewable energy credits for the solar program and can use it to reach federal renewable energy goals.

Minnesota Power is also working with the Guard on reducing energy consumption on the base by 30 percent by 2030, as required by a Department of Defense mandate.

The Arden Hills base, meanwhile, boasts a 40 kilowatt solar array on a 100,000 square foot maintenance building, providing 6.5 percent of its electric needs. The same sized solar array has been installed at the Stillwater armory, too.

Officials have been working with Xcel Energy on a potentially larger solar project that could create even more renewable energy at Arden Hills, Goreham said.

Currently, the Guard has multiple geothermal systems for heating and cooling buildings on its campus, among them the main armory, education center and training and community center.

Three residential buildings at Camp Ripley saw energy consumption drop by 45 percent after the installation of geothermal, according to the Guard. Geothermal was also added to a readiness center in Arden Hills.

The Guard has studied the potential for a biomass system that would burn wood chips and debris – all plentiful on the base – to provide heating requirements to seven of the camp’s largest buildings.

Such a move would increase the camp’s resiliency by introducing another heat source and “greatly reduce our carbon footprint,” Goreham said.

The Guard is working on making existing and new buildings more energy efficient. In 2015 the 64,000 square foot Ben Franklin Readiness Center in Arden Hills opened with a host of sustainability features.

It earned a silver LEED (Leadership in Energy and Environmental Design) designation from the United States Green Building Council because of its many features, from an efficient design and daylighting to geothermal heating and cooling.

“The annual energy cost for this building is 52 cents a square foot compared to the (national) Guard average of $1.08 per square foot,” Goreham said. “We have a $52,000 savings per year compared to baseline.”

As new buildings come online and old ones are renovated, the Guard’s sustainability team plans to have all federally funded buildings achieve Silver LEED status. State funded buildings will have to reach a set of standards known as SB2030 that are as stringent as the LEED program.

The Guard has also engaged in contests and other behavioral activities to decrease energy use. A contest among the dozens of armories and Guard facilities saw energy consumption plunge by 13 percent on average, leading to a $480,000 cost savings.

A similar effort led to a 26 percent reduction in water use at Arden Hills. Goreham likes to emphasize that while lowering energy demand remains important, so does decreasing trash going to landfills and strain on water resources.

It’s all part of a continued push to net zero for energy, waste and water loss. While the goal may be difficult, the Guard is in full pursuit of it, Goreham said.

“Net zero is ambitious but by working on these programs and encouraging behavioral change we’ll continue to reduce energy, waste and water use,” he said. “The more sustainable we get the better we’ll be at sustaining our mission.”