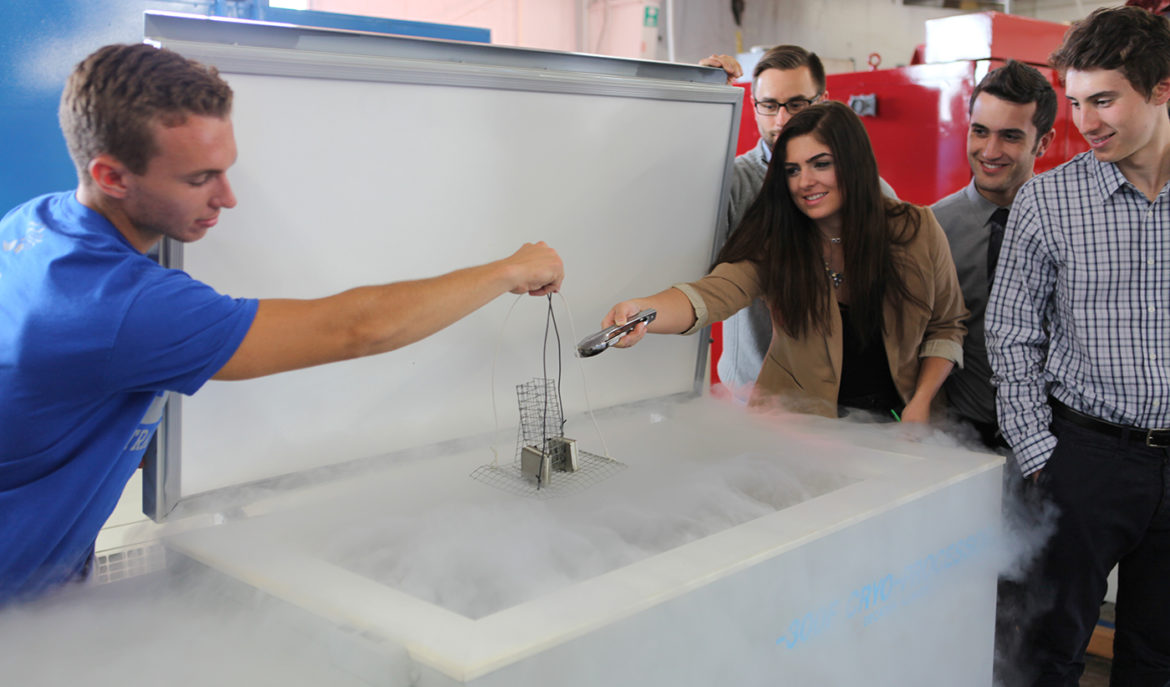 Students with BluSolar at Millikin University in Illinois boost the performance of solar cells by exposing them to extreme cold.

A Chicago-based clean tech accelerator is giving eight student-led startups the chance to win tens of thousands of dollars in early-stage funding and to compete in a national competition later this year.

The Cleantech University Prize (Cleantech UP) is an annual competition hosted by the U.S. Department of Energy and Spark Clean Energy, a nonprofit that promotes university-level energy innovation. Clean Energy Trust, the Midwest host and coordinator for Cleantech UP, announced the regional finalists in a blog post this week.

“The diverse cross-section of universities and technologies represented by the finalists demonstrate that the Midwest’s universities continue to lead on using science and innovation to solve some of the biggest challenges we face,” Erik Birkerts, CEO of Clean Energy Trust, said in a statement.

The Midwest finalists hail from universities across the region and work on innovations ranging from better systems for energy demand management to more efficient materials for electricity hardware. Over the coming weeks, each team will be matched with an industry mentor to further hone their proposals and business models.

On February 9, the teams will make their final pitch before a panel of expert judges. One team will win a $50,000 grant, and the top three teams will go on to compete in the national competition in June.

‘Positive impact on the world’

Estefano Martinez is a sophomore business student at Millikin University in Decatur, Illinois. He’s also CEO of BluSolar, one of the eight finalist teams. Martinez says the access to the mentors and network made available by Clean Energy Trust is a huge boost for the teams.

“We’re most excited to see what these other seven startups are doing,” Martinez said. “We’re all competing, [but] we ultimately all have the same goal, and that’s to make a positive impact on the world.”

For BluSolar, that means boosting the performance of solar energy cells, essentially by exposing them to extreme cold. When certain materials are cryogenically treated, Martinez explains, molecular structures are permanently realigned in a way that can improve overall performance. Working with 300 Below, a commercial cryogenics company, BluSolar has demonstrated a 25 percent improvement in wattage output because of these “microstructural changes” to photovoltaic cells.

Martinez says there’s also evidence that the treatment could reduce the chance of cell degradation over time, thereby improving the lifespan of solar-power systems.

“We can help these companies be profitable,” Martinez says. “To us, that’s helping democratize solar power. To us, that’s the end goal.”

Wattcoin Labs, based at the Illinois Institute of Technology and the University of Wisconsin-Madison, is another of the Midwest’s Cleantech UP finalists. The team seeks to address the financial complexities of an increasingly distributed, renewable-powered electric grid.

Think of Wattcoin as the smart grid’s Bitcoin, a digital currency that aims to make power transactions more efficient by eliminating the need for a centralized clearinghouse or ledger. These digital credits could help facilitate the “micro energy transactions” between smaller “prosumers” on a smarter, more networked power grid. In other words, a homeowner with rooftop solar could more easily buy or sell electricity with other small producers and consumers.

For Clean Energy Trust, Cleantech UP represents an opportunity to give budding energy entrepreneurs the kind of support they might not otherwise receive in a competitive startup scene.

“Clean-tech startups aren’t really great candidates for traditional [venture capital] models,” says Emily Achler, Clean Energy Trust’s director of marketing and communication. “That’s primarily because they are capital-intensive. It’s hardware. It’s R&D. The development timelines are much longer than they might be in the traditional software world. The risk is higher, and sometimes the return multiplier is lower.”

Clean Energy Trust is also currently accepting applications for its 2017 CET Challenge, which will award up to $1 million of this kind of “patient capital” to early-stage, Midwest-based, clean-tech companies.

While the future of these kinds of public investments in low- or zero-carbon energy technologies remains uncertain under the incoming Trump administration, some in the private sector are pushing ahead with their own big-money financing schemes.

Billionaire philanthropist Bill Gates launched Breakthrough Energy Ventures last month, a fund that will invest more than $1 billion in “scientific breakthroughs that have the potential to deliver cheap and reliable clean energy to the world.” The fund has its origins in the December 2015 Paris climate talks, when private investors across the globe came together to form the Breakthrough Energy Coalition.

“The world needs the skills and resources of investors with experience driving innovation from a lab to the marketplace,” Gates wrote last month. “The private sector knows how to take great research, turn it into a great product, and ultimately create a great company to bring a transformative technology to market.”