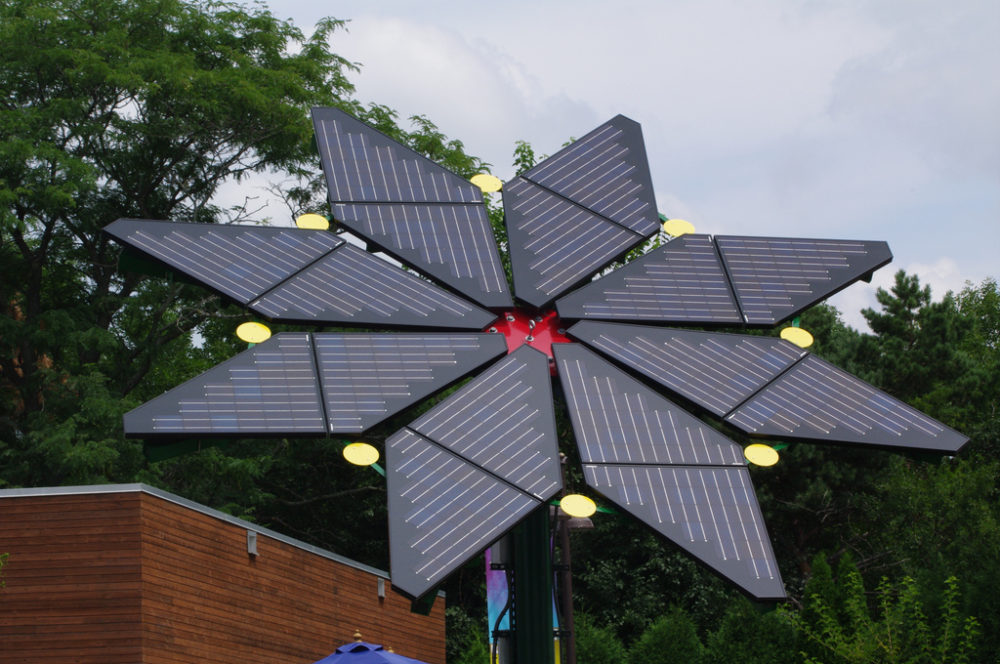 Solar panels at the Milwaukee Zoo.

Wisconsin has stood out nationwide for state officials’ hostility toward solar and other renewable energy sources, as codified in decisions by the Public Service Commission as well as moves by Gov. Scott Walker and state legislators. But there are also numerous bright spots in Wisconsin’s clean energy landscape, including leadership by rural electric cooperatives in renewable development.

Wisconsin’s renewable energy markets and the larger benefits of renewable energy are among the topics to be explored at a day-long clean energy summit hosted by RENEW Wisconsin on Thursday in Madison.

Midwest Energy News talked with one of the summit’s keynote speakers, Adam Browning, in advance. Browning is executive director and co-founder of the advocacy group Vote Solar, which aims to make solar power mainstream nationwide. He previously ran a pollution prevention program at the U.S. Environmental Protection Agency and also served in the Peace Corps in Guinea-Bissau, West Africa, which along with his Miami upbringing “taught him about the power of the sun,” as his bio says.

Midwest Energy News: Are you optimistic about the future of solar development in the United States — will it become ‘mainstream’ any time soon?

Browning: I feel very optimistic about the future of solar for a couple reasons. Poll after poll shows a super-majority of Americans of all political persuasions really want to see more renewables, and solar in particular.  If you’ll forgive the pun, solar polls through the roof. Secondly, the costs are getting better and better. Around the country we’re seeing wholesale solar prices that beat that of building new coal or natural gas or nuclear plants. In sunnier parts of the country, we regularly see long-term contracts under 4 cents per kilowatt-hour, fixed for 20 or 25 years. The gravitational pull of low prices is inexorable. Those are the twin pillars of solar — the popularity and the dropping cost.

You mention how solar can increasingly compete with other forms of utility-scale generation, but how about residential solar? Is that becoming financially accessible to big parts of the population too?

Both [utility-scale and residential solar] are a function of scale. Back in 2002 [when Vote Solar was founded], solar was really expensive. But we had good analysis that the more you deployed, the more capital you invested, the more entrepreneurship you attracted, the lower costs would become. And that’s exactly what has happened.

In the early days we focused on incentives, incentives with a purpose and goal in mind. Developing the local jobs and infrastructure, a local market that is sustainable. If you’re able to do that, right now the majority of the cost of a solar system isn’t in the hardware, it’s in customer acquisitions and all the other business expenses that surrounds having a [solar] business. The larger and more efficient your market, the lower the per-unit cost for customers.

What might the Trump administration mean for solar, including the fact that the Clean Power Plan could be killed?

A really important point here is that the most important decisions around electricity are made at the state level, not the federal level. This allows states to take leadership about where they want to go. The history of solar to date has been about state-level leadership.

The biggest issue is that last year the solar industry negotiated a deal around the federal Investment Tax Credit with a five-year smooth ramp-down in exchange for permanent lifting of the oil export ban. This year it’s widely expected there will be comprehensive tax reform. The question is will that deal that was struck last year continue to be honored? If you abruptly pull the plug on the business environment that was negotiated, that’s disruptive.

On the state level as you mentioned, what is the outlook in Wisconsin for solar and other forms of renewables?

With a lot of the controversy going on around utilities adding fixed fees to their customers who want to generate solar, I would point out that Wisconsin’s average retail electricity prices are around 13-14 cents per kilowatt-hour, and in Hawaii, we just saw this week a deal for solar plus storage being offered at 11 cents per kilowatt-hour. If utilities are trying to force structural changes to make solar uneconomic, the time is not that far off when customers will have another option, cutting the cord completely, in the way that cell phones made what Ma Bell was offering with landlines irrelevant.

Technology will find a way. If customers want solar, a business model based on denying customers what they want isn’t a very smart business model. Given the mass of benefits that solar provides, given the low costs, given the fact it doesn’t pollute, and the fact it’s not using coal mines and natural gas … the totality of those benefits will be seen as an opportunity and a path forward where everybody wins.

You are based in California, a leader on solar policy and deployment. Even though the politics and climate are very different, does California hold lessons for Wisconsin?

First let me emphasize that there are examples of real national leadership right in Wisconsin. What the rural electric cooperatives are doing right now with community solar is setting a national example. I wish we had programs like that in California.

‘If there’s anything that could be a uniting factor in our divided country, solar would make sense.’

That said, there’s a lot of interesting stuff happening around the country. There’s a lot [Wisconsin] could do to increase its investor-owned utilities’ investment in wholesale solar, and to create a path for rooftop solar. Financing could be improved, the cloudiness around the ability to do solar leasing should be fixed. In a place like California, in the past year about 10 percent of the state’s power came from solar, and a good third of that came from rooftop solar. By 2030, California will be well over 30 percent solar-powered. California is showing it is definitely possible to do.

The Green Tea Coalition has voiced Republican support for solar in Wisconsin and other places. In light of all the national attention on political polarization and the disenfranchisement of many rural and conservative people, is solar something that can bring people together?

Frankly solar is an issue that has probably the most overlap between Trump and Clinton supporters. Pew did polling around the time of the election that showed about 90 percent support [on different questions related to solar]. If there’s anything that could be a uniting factor in our divided country, solar would make sense.