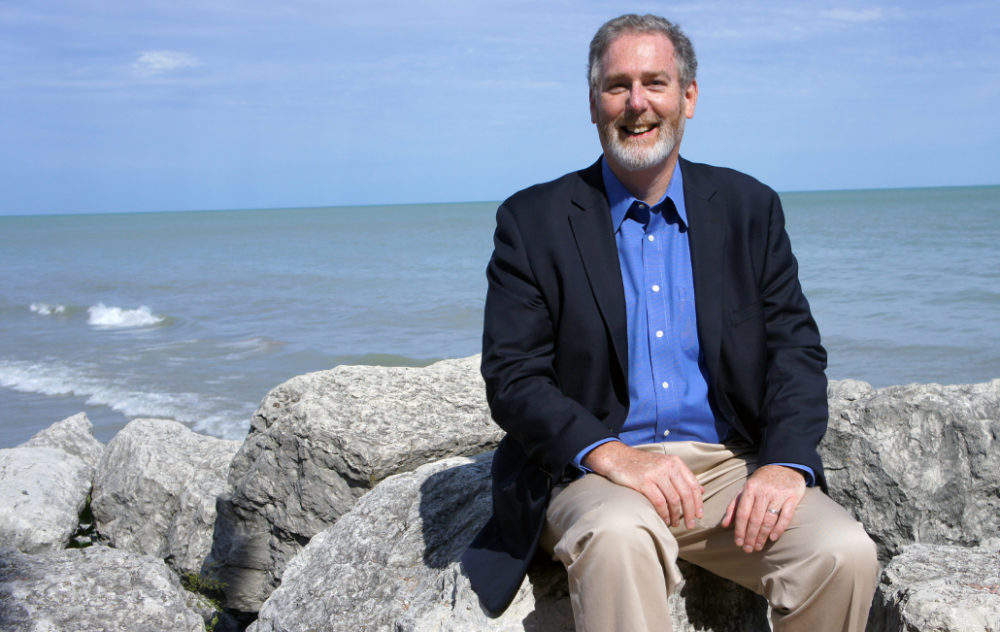 Howard Learner is the executive director of the Environmental Law & Policy Center in Chicago.

Howard Learner, executive director of the Environmental Law & Policy Center based in Chicago, spent the early 1980s fighting for fair housing laws and civil rights protections during the Reagan administration.

On the eve of Donald Trump’s inauguration, Learner lamented how he feels like the clock has turned back three decades, and he’s again in the position of fighting for basic protections and rights that many Americans have long embraced.

But Learner said he is up for the battle, and confident that public opinion, state and local politics and economics are on his side.

Midwest Energy News talked with Learner about the impending Trump administration and the ELPC’s plans for the next four years. (EDITOR’S NOTE: This transcript has been updated for clarity)

Midwest Energy News: So how do you feel about the next four years?

Learner: We have a plan, we’re geared up to fight back. The best defense is a good offense – we’re fired up and ready. At ELPC we need to step up and be prepared to act in the changing political landscape, we need to find ways to play to win both in terms of defense in Washington D.C. and the place we can play offense to achieve important progress in the states and the cities. The Midwest is a pretty good place for us to get things done.

What role does the Midwest play exactly in the struggle to protect the environment and clean energy during the Trump administration?

There have been good examples in the Midwest that illustrate both points. The tragedy of contaminated water in Flint has made it clear to Democratic and Republican policymakers around the Midwest that the public won’t accept unsafe drinking water. It’s a bipartisan issue, it’s a nonpartisan issue.

Recently [Illinois Gov. Bruce] Rauner signed into law legislation to reduce the lead risk in the drinking water supply for children in public schools and day care centers…When it comes to clean safe drinking water and healthier clean air, there is strong mainstream public support for better protection by both the U.S. EPA and the state EPAs. They believe there are common sense solutions that we can carry forth, that transcend partisan urban-rural and other divides.

Are you saying that it will be up to governors and state legislatures to pass stronger laws in case the Trump administration weakens or does not enforce federal protections?

On the clean water, clean air and clean energy fronts, it’s clear we’re going to need to play defense in Washington D.C. Trump nominated Oklahoma Attorney General Scott Pruitt to be U.S. EPA Administrator.  Mr. Pruitt has spent his career as an Attorney General persistently suing the EPA to stop or stall standards to protect clean air and safe drinking water. It is the fox guarding the chicken coop. As the old saying goes, you hope for the best but you plan for the worst.

Unfortunately I expect that ELPC and our colleagues will have to file lawsuits to require the EPA to do its job and fulfill its responsibility, to protect healthy air and clean drinking water for people around our region.

We have 20 environmental attorneys, and we are stepping up and hiring additional litigants. Secondly, we have created the expanded HELP program – the High-impact Environmental Litigation Program. After the election we got calls from a number of attorneys saying, “I want to help — give me a pro bono case I can do.” We are building upon and expanding on ELPC’s top-rated environmental litigation team and at the same time we are tapping a number of experienced litigators who want to take on pro bono cases to help protect clean air and clean water.

Since many environmental laws are self-implementing, depending largely on citizen suits for enforcement, is it really that different from what you’ve had to do during previous administrations?

We’ve certainly brought citizen suits in the past, we have a citizen suit pending in federal court in central Illinois to enforce clean air violations by Dynegy at its [E.D. Edwards] coal plant. But this is different. When an administration cares about environmental regulations in a positive way, the Attorney General tends to bring the enforcement actions, and we fill some gaps. If we see President Trump’s administration retreating on its enforcement responsibilities, ELPC will step up and have a much more vibrant enforcement strategy. We’re preparing to do that by increasing our in-house litigation team.

That all takes resources and funding. Some media outlets and non-profit organizations have actually seen a boom in support because of Trump. Has that happened for environmental organizations, or do you expect it to happen?

We’ll see. There are some groups out there these days that seem to be asking for money twice a day, it’s a disaster and then it’s another disaster. I hope we’re at a time when environmental philanthropy will be stepped up in response to the needs of the times. These are extraordinary times. And it doesn’t hurt that the stock market is at a relatively high point.

Certainly people in the Midwest and around the country who care about the environment understand that it’s likely to be under siege if someone like Scott Pruitt does become the next EPA Administrator. I think when times are tough, people are willing to dip into their pocketbooks more and step up. But we aren’t taking out loans based on hoped-for increased fundraising, and you’re not going to see the fundraising emails from ELPC. This isn’t about money.

We hope and believe that Congress will not allow the Trump administration to roll back the Production Tax Credit for wind power or the Investment Tax Credit for solar power. Sen. Charles Grassley (R-IA) said [a PTC repeal] would happen “over my dead body.” This is pretty bipartisan.

Solar and wind power have strong bipartisan support. Look what has happened in about the past three months. Illinois passed a strong Renewable Portfolio Standard [fix] supported by both Democrats and Republicans. Iowa Gov. [Terry] Branstad has always taken pride in the state’s wind power leadership, and Iowa is starting to step up on solar development. Wind power development in Iowa is good for jobs, economic growth and the environment, and it’s supported by the entire Republican leadership as well as the Democrats.

And Minnesota has always been a leader, in Indiana we have a little work to do, in Wisconsin we have Gov. Scott Walker. But there are two new wind farms in Wisconsin now. For a long time wind power was stalled in Wisconsin, now there are large new wind farms going up in Wisconsin and Dairyland Power [Cooperative] is doing another 15 MW of solar. We’re seeing smart policy plus technological innovation driving clean energy development in the Midwest.

We’re going to have to play some defense in Washington D.C., but we’re looking at these four Midwest states if not five that have stepped up in the last few months. What it shows is first of all that clean energy development has strong mainstream public support. Secondly, it makes sense as a matter of economics. And policymakers understand where the economics are and they are supporting smart policies.

Trump claims he is such a great businessman, so if this is all true why would he undermine clean energy development?

I will not try to interpret what’s going on in President-elect Trump’s mind. The ITC and PTC have created thousands of new jobs and accelerated cleaner energy in the power markets, protecting public health and the environment, which is what the public wants. This is good for jobs, good for economic growth and good for the environment.

Trump has said he wants to create jobs. If President-elect Trump were to support repealing these important public incentives, that would be a triumph of misplaced ideology over common sense.