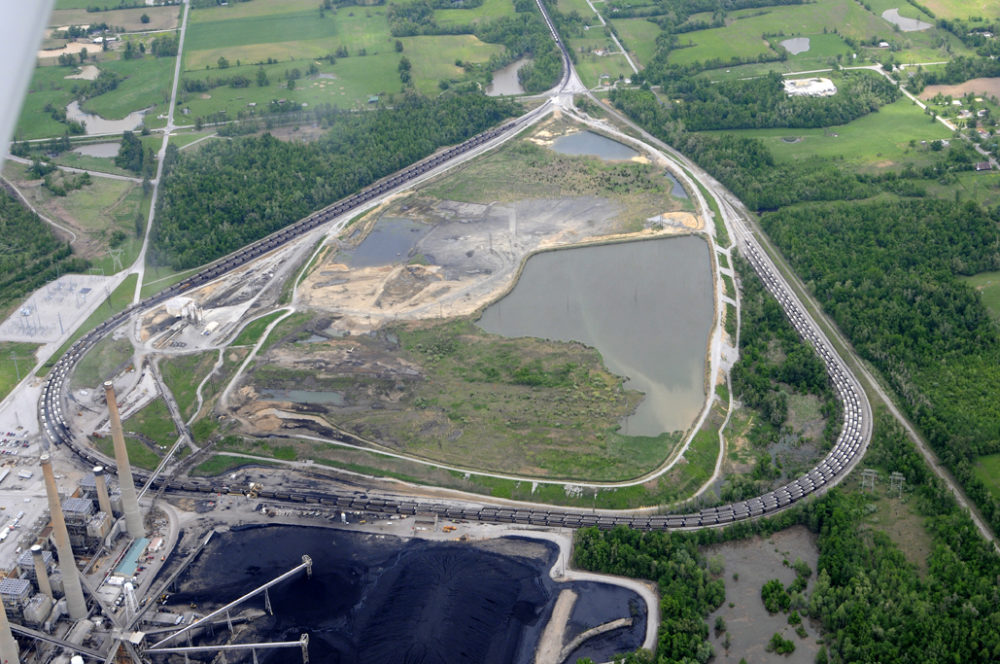 The coal ash impoundment at Dynegy’s Joppa power plant in Illinois is considered to have “high hazard potential.”

After the 2008 disaster that inundated a Tennessee town with toxic coal ash just before Christmas, the U.S. EPA launched a process that eventually led to the implementation of rules — in 2015 — meant to avert such future disasters.

Like many environmental regulations, the rules are “self-implementing,” meaning it is largely up to regular citizens or advocacy groups to keep tabs on compliance and ask the government to enforce violations.

In Illinois, the reports filed by coal ash impoundment operators under those rules have raised concerns and questions.

Two Illinois coal ash impoundments run by Dynegy, at the Joppa and E.D. Edwards power plants, are considered to have “high hazard potential,” including likely loss of human life in the case of an impoundment failure.

The combination of barely-passing safety grades and potential for catastrophe is troubling to Andrew Rehn, water resources engineer at the Prairie Rivers Network.

The hazard potential and safety factor assessments are among the reports that must be done and publicly posted under the federal rules on coal ash storage that took effect in 2015.

Rehn figures he is one of relatively few people statewide poring through the many pages of detailed reports posted on various websites by coal companies with impoundments. Rehn and colleagues at several other environmental groups have been analyzing the reports filed under the rules, including a batch of documents that were due in November 2016. Rehn also logs the state’s coal ash impoundments on an interactive map.

Rehn is concerned by the scores of the two Dynegy plants, along with some other findings and the fact that some reports seem to be inexplicably missing. He is also concerned that it is up to regular people to decipher technical reports and keep tabs on some of the state’s largest companies.

“It’s fantastic that this information is all being made public,” Rehn said. “But it would be nice to have an enforcement mechanism. To know the EPA would be doing this; that if I wasn’t taking the time to do this, somebody else would be looking into it. We need another tool to enforce compliance besides citizen lawsuits.”

The Joppa East and E.D. Edwards coal ash impoundments’ safety factor scores in recently released reports are just barely above what the rules require. Meanwhile, the separate hazard potential assessment found that failure of the perimeter dikes at the impoundments would “probably cause loss of human life.”

The Joppa East impoundment in southern Illinois scored 1.59 and 1.01 on measures for “static safety factor” and “seismic safety factor,” where scores of 1.50 and 1.00, respectively, are required. The impoundment has a “high hazard potential” because of nearby residences and public structures including the power plant and Joppa High School, according to another report.

An impoundment at E.D. Edwards power station in central Illinois scored 1.54 and 1.08 on the safety factor assessments, and it also had a high hazard potential finding that a failure of the perimeter dike would “probably cause loss of human life,” with two mobile homes nearby.

Dynegy impoundments at its Kincaid, Newton and Coffeen plants also had scores not far above passing and had findings of “significant” hazard potential, meaning loss of human life is unlikely but economic and environmental damages would occur.

Dynegy spokesman David Onufer did not respond to specific questions about the scores at different plants, but said: “Dynegy takes its safety and compliance responsibilities seriously. The federal hazard classifications do not assess current structural integrity. We participate in regularly required inspections and are in full compliance with all state and federal rules and regulations.”

“They passed [safety factor requirements] but passed by a closer margin than others with high or significant hazard potential,” Rehn said.

But these reports for a number of Illinois impoundments cannot be found on the websites where companies post their compliance documents. It is up to each company to create a website where they post reports. The EPA compiles these links on its own website but warns that the list could be incomplete or out of date.

At the link Dynegy provided as its repository for the reports, there appear to be no safety or hazard potential assessments publicly available for at least one of the impoundments at its Baldwin plant and several impoundments at its Wood River plant.

The rules only require reports to be filed if the impoundment stores at least 20 acre-feet of coal ash and is at least five feet tall, or if it is at least 20 feet tall. That means some impoundments don’t need to report, including two impoundments run by NRG at the Will County plant outside Chicago. (NRG’s compliance website lists reports required under the federal rules.)

Documents filed by Dynegy in late 2015 indicate that the Wood River and Baldwin impoundments lacking the safety factor and hazard potential reports are significantly over the volume that triggers the requirements.

Onufer said there are no reports outstanding for the Baldwin plant, and that the company is in compliance with all requirements. He did not respond to questions about where the seemingly missing reports could be found or whether the impoundments in question are exempt from the rules.

The rules also mandate reports noting companies’ closure plans for impoundments. The reports indicate that most impoundments in Illinois will be closed in place, meaning the ash will be left where it is and covered with a cap and seeded for vegetation.

In some locations, advocates including the Prairie Rivers Network are pushing companies to remove the ash and store it in a lined and capped site elsewhere. That’s because impoundments are typically near bodies of water, and they fear erosion and groundwater flow can destabilize closed impoundments over time, causing failures that could be disastrous for adjacent rivers or lakes and drinking water.

Dynegy and other operators filed plans that mostly involve closing impoundments in place. But NRG reported that ash will be moved out of most of its impoundments as they are closed. The Lincoln Stone Quarry is the only impoundment that NRG plans to close in place, according to the reports. Rehn described NRG’s moving coal ash before closure as a best practice that other companies should emulate.

“I know the coal ash operators don’t want to move it in many cases. But NRG is moving most of their coal ash, for me that was a little bit of a surprise,” Rehn said. “So it is possible.”

NRG spokesman David Gaier said the company considers various factors in deciding how to deal with an impoundment after closure. And he noted that the company tries to divert as much ash as possible from permanent storage, by making it available for “beneficial reuse,” including in construction materials and as a replacement for cement in the making of concrete.

“NRG will eventually close all the impoundments as dictated by those rules, and our current plans are that at that time, we’ll begin removing ash from the plants and dispose it directly into lined, dry, fully-regulated and compliant landfills or beneficially re-use as much as possible,” Gaier said. “Closing the Lincoln quarry in place is the only practical solution in that instance. A quarry is very different from a typical impoundment.”

Onufer said that at Dynegy, the “goal is to safely and responsibly recycle 100 percent of coal ash for beneficial reuse by 2020. We are already much of the way there, achieving 70 percent recycling in 2016, with a goal of 80 percent in 2017.”

While recent coal ash may be diverted to beneficial reuse, Dynegy and other companies are dealing with massive amounts of coal ash from past decades of burning coal. That’s what some advocates want to see moved.

“All of Dynegy’s closure methods used today, including cap and close, are in full compliance with what is listed in the rule,” Onufer said.