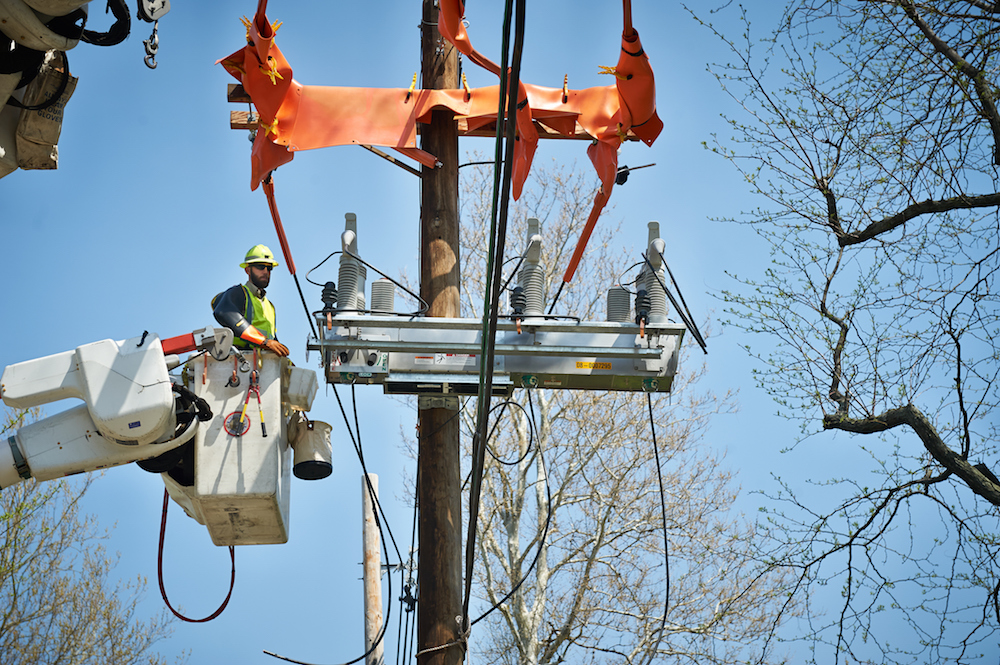 An IntelliRupter on a power pole in Champaign, Illinois.

The term “smart grid” might conjure images of advanced power meters, smart thermostats and any number of high-tech devices spreading across today’s power grid. Still, much of the work toward making the grid smarter, cleaner and more reliable takes place behind the scenes — quiet, incremental advances in technology familiar mostly to engineering experts and utility technicians.

Take, for example, the IntelliRupter PulseCloser Fault Interrupter developed by Chicago-based firm S&C Electric in 2006. This thousand-pound piece of Wi-Fi-enabled electrical equipment is a kind of “smart switch” that utilities use to more quickly detect and correct outages along their distribution systems. The IntelliRupter and other smart switches have grown in recent years to be a popular — if somewhat inconspicuous — tool in Illinois utilities’ smart-grid toolkit.

“This is something that I think really is a good description of what the smart grid is all about,” says John Barud, senior director of division operations at Ameren Illinois, which delivers electricity to 1.2 million customers across 43,700 square miles of central and southern Illinois. “We’re using technology to minimize the number of customers that we would lose when we have a problem out on the line.”

The smart grid is essentially the space where power engineering overlaps with the information-technology revolution, and the IntelliRupter falls squarely under that heading. It seeks to improve upon a decades-old grid mechanism called “fault reclosing” while also integrating 21st-century wireless communications capabilities.

These kinds of innovations run the risk of exposing more critical infrastructure to cybersecurity attacks, but, if managed carefully, many analysts say these networked grid technologies are vital to make a more efficient, reliable and renewables-based power system.

Ameren Illinois has invested billions of dollars in electricity delivery system upgrades since 2012, spurred on by the Energy Infrastructure Modernization Act passed by the Illinois General Assembly in October 2011. The ensuing improvements have increased system reliability by an average of 17 percent and saved customers an estimated $48 million per year, according to Ameren Illinois.

For Barud, the IntelliRupters have played a big role in “driving that reliability improvement.”

In a storm, for example, a tree limb might knock out a power line and cause a short circuit. To protect the broader system, an electrical switch called a circuit breaker automatically interrupts current flow. The recloser then un-breaks (or re-closes) the broken circuit to determine whether the fault is temporary or something broader and more serious.

“If you’re ever at home and the lights are blinking … that’s these reclosing mechanisms trying to see if that fault is temporary,” says Chris Evanich, application director of microgrids at S&C Electric. “If the fault is temporary — great, the lights blink and your power is restored.”

That’s a helpful fix for a short-term problem, but the downside of this technology, which was first developed in the 1940s, is that it can place long-term stress on other parts of the electrical system. Repeated attempts to re-energize a faulty circuit can itself exacerbate the original fault, Evanich says. That can cause electrical equipment failure down the road, which requires a utility to send out a crew to make corrections.

IntelliRupters aim to do what traditional reclosers do more efficiently while minimizing the negative “fault-multiplier” impact on the grid as a whole. To test for faults, the IntelliRupter emits a small pulse of current that uses 95 percent less energy than existing reclosers, according to S&C.

Like all smart-grid technologies, there’s a networking component to the IntelliRupter as well. Each device is equipped with two-way Wi-Fi communication, which enables technicians to access unit data remotely. It also enables multiple IntelliRupters to communicate and coordinate automatically among themselves. If a fault occurs in one part of the grid, S&C says a system of IntelliRupters can reroute the flow of power automatically, thereby limiting the extent of a failure and curtailing the number of crews needed to resolve it.

“That’s the ultimate goal of having automation: to minimize the time customers are out of power,” says Evanich.

Ameren Illinois has 410 IntelliRupters installed across its service territory. This year, the utility aims to install another 40. That’s a relatively small number given that there are 1.4 million power poles and 46,000 miles of distribution power lines in its service territory, but Barud says the impact goes well beyond the technology’s limited footprint.

By strategically deploying IntelliRupters in higher-density areas — Decatur, Peoria, Champaign and Urbana, for example — Barud says the utility can maximize the number of customers that benefit from the smart-switching technology.

Now, the company is beginning to expand into less-populated areas. Earlier this month, Ameren Illinois announced it was launching a three-year plan to upgrade the power grid in the small, western Illinois city of Aledo and nearby Seaton, population 222. The project is scheduled to culminate in 2019 with the installation of IntelliRupters on new 12-kilovolt power lines.

ComEd, Illinois’ other major utility, is using similar smart-switch technology from Silver Spring Networks, a smart-grid company based in San Jose, California. Between 2012 and 2015, ComEd avoided more than 4.8 million customer interruptions thanks to the smart switches, according to Silver Spring. The company estimates that outage avoidance to be worth $1.1 billion in societal savings.

“Our customers’ expectations continue to grow,” says Barud of Ameren Illinois. “We have folks — whether they’re residential, commercial or industrial customers — using very sophisticated computers and other electronic devices, so they’re very sensitive to when we have interruptions on our system. [IntelliRupters help] ensure that we provide the safe and reliable service that our customers expect from us.”