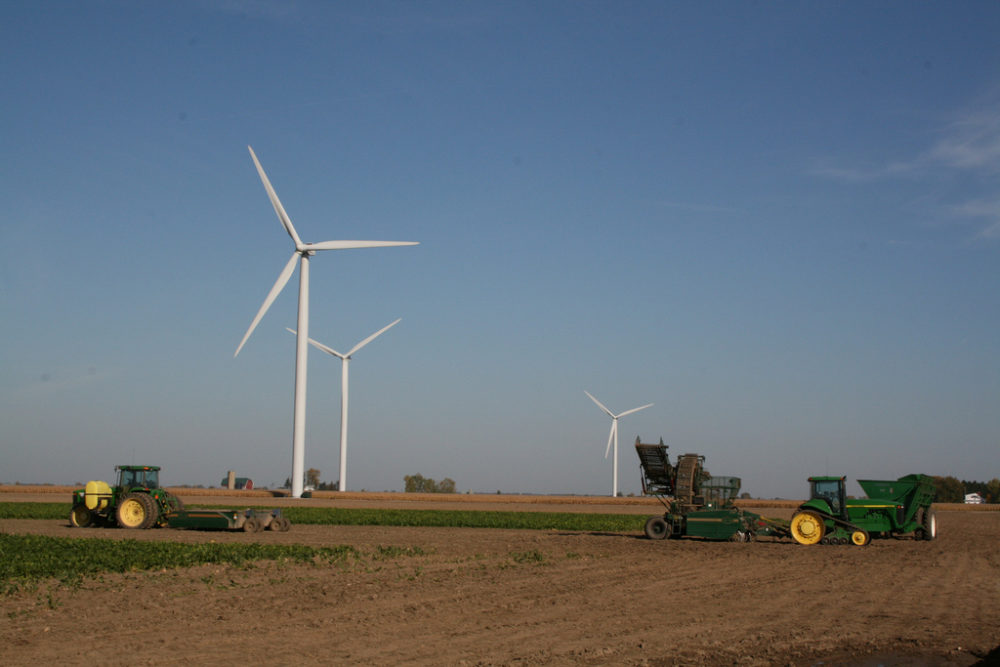 In the past two months, two rural Michigan counties have adopted one-year moratoriums on wind development, though they appear to be in vastly different positions when it comes to regulatory experience.

On December 29, Huron County in Michigan’s Thumb region — also known as the state’s wind capital due to the comparatively high density of turbines there — enacted a one-year moratorium for areas that fall under county zoning laws.

Ongoing wind development has been a contentious issue in the Thumb region and Huron County in particular. Some local officials and residents believe the county has reached a saturation point. Two years ago, the county revised its zoning regulations to catch up to all of the development going on in response to residential concerns over lax regulations.

Bodis said the question now is whether townships should pursue self-zoning rather than let the county manage it. Some townships’ zoning laws are stricter than the county’s, he added.

“To me, there’s nothing better than the voice of the people,” Bodis said, referring to the referendum attempts for township zoning. He added that 17 of the county’s 28 townships fall under countywide zoning and will thus be impacted by the moratorium.

“It’s always better if everyone is on the same page, but that’s not the case,” Bodis said. “I’ve always tried to balance the thought of those who own the land wanting to do what they do with their property as opposed to those who don’t own the property. My district is in favor of wind turbines, and I’ve been a proponent. It’s really divided — I don’t know where this is going to go.”

Originally, the Huron County moratorium was to last five years, “or until the County has more definitive answers to the many issues related to the long term operation of large scale Wind Energy Systems, whichever occurs first,” according to the resolution, which ultimately passed 5-1 and took effect on January 18.

Bodis said the one-year pause may indeed prevent new proposals from coming along, “But we’re also to the point where we have enough. I think we’ve done our share.”

While the county has had a zoning ordinance in place since 2008, several new members were elected to the county commission in November and reportedly want a chance to familiarize themselves with the industry.

Apex spokesperson Albert Jongewaard says the company is “still very interested in the project moving forward” and that the company’s experience there so far has been positive. The company acquired the project from BP Wind Energy in 2014, and cites the wind resource and access to existing infrastructure as reasons for pursuing the project.

He said Apex has, at this point, been unable to answer certain questions about the project.

“Some of the community concerns we just weren’t able to answer because it’s still premature to be able to comment authoritatively on specifics of the questions,” Jongewaard said.

In confronting residents’ concerns, Jongewaard said the key is “trying to make sure we’re providing accurate information in clear, concise ways that people can understand. I’m confident we can stand on the merits of the project.”

A patchwork of regulations

While it appears Shiawassee is sorting out a countywide plan, Huron’s experience shows the complications of wind development in areas that span multiple townships — and residents’ perceptions.

Whether it’s township or county-wide rules, developers and advocates say the key is to avoid confusion.

“I don’t know that (county or township zoning) matters per se, as long as there is a clear understanding of what the ordinances are and what’s expected of the developer,” Jongewaard said. “If there are clear expectations and guidelines, everyone can operate on the same page. If those are in flux, it does create more questions at the end of the day.”

“Different communities have different needs,” she said, noting that there have been successes under each model, including in Gratiot County in mid-Michigan. “Township officials are frustrated — it’s a lot of information. They run for these offices, which are often part-time. It’s a lot of work for them to be faced with the ins and outs of not only wind turbine deployment but understanding a lot about how utilities work.”

Eichler Clark says it’s key for developers to be actively engaged with residents and “creating a community dialog” around development.

“It’s important that communities are heard and that it balances out some needs from the other side as well,” she said. “With the (Renewable Portfolio Standard) increase (to 15 percent), there is going to be more need for renewables deployment. … I’m bullish that there’s a good pathway to do it in a way for communities to be comfortable with.”

John Sarver, board member of the Great Lakes Renewable Energy Association, says he wasn’t too surprised by the county’s efforts to halt wind development.

“Overall, I don’t know if it changes the overall picture in Michigan with respect to wind development. There are so many different parts of the state you could put a utility-scale wind farm,” he said. “I’m just guessing developers go somewhere else.”