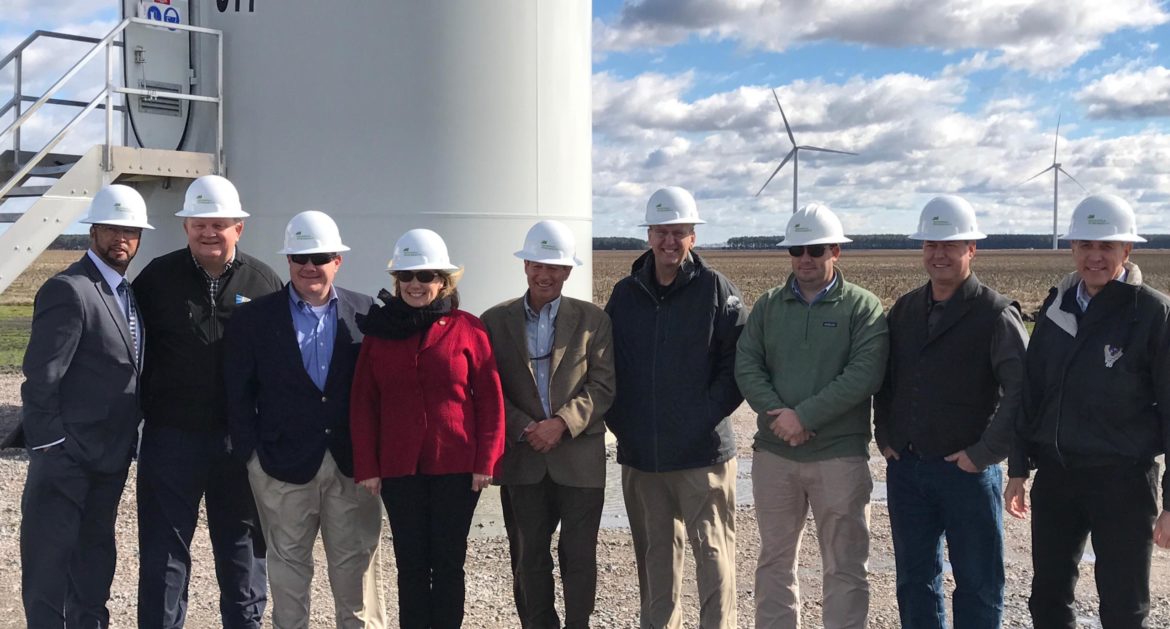 North Carolina Rep. Tim Moore, third from left, was among a group of lawmakers to tour a wind farm that some Republicans have tried to shut down.

Last month, powerful N.C. House Speaker Tim Moore was among ten GOP state legislators who urged the Trump administration to shut down a new wind farm in Northeastern North Carolina, arguing in a fiery letter the project would interfere with military operations.

Now Moore, the second-term speaker from Cleveland County who once cast a critical vote to preserve the state’s renewable energy standard, appears to be softening his stance on the region’s first major wind farm, according to remarks obtained by Southeast Energy News.

Asked about his reaction to a tour he attended last week of Amazon Wind Farm U.S. East, Moore’s office shared a statement that contrasted sharply with the January letter’s demands to either shut down or drastically modify the 104-turbine farm near Elizabeth City.

“The Amazon Wind Farm is new to North Carolina and takes advantage of a valuable natural resource our state has to offer,” Moore said in the statement. “Based on the information I have gathered today and over the past several weeks, it appears the initial concerns raised by the military are being addressed.”

Joseph Kyzer, the communications director for Speaker Moore, did not confirm whether the statement meant his boss, one of the state’s most influential politicians, was backing off completely from the position he endorsed in the missive to team Trump.

But proponents of Amazon Wind were relieved all the same.

“We’re happy with the statement. The speaker’s sentiments are well-received,” said Paul Copleman, spokesman for Avangrid Renewables, the Amazon Wind project’s developer. “We appreciated him taking the time to visit the project, and ask a lot of detailed questions about the project’s process, and about the lengthy studies that we’ve undertaken with the Department of Defense.”

‘So much that wasn’t true’

Copleman was eager for the chance to answer questions from Moore and other legislators. “Wind energy is a new business in North Carolina,” he said. “Inevitably people are going to have questions.”

That’s part of why Rep. Bob Steinburg (R-Chowan) hosted eight of his legislative colleagues for a visit to Amazon Wind in his rural district. That, and to show off a $400 million investment he says the vast majority of his constituents support. “They see it as progress,” he said.

Organizers of the tour also sought to “make sure everyone is on the same page about the truth about wind power,” said Katharine Kollins, president of the Southeastern Wind Coalition. “There was so much in that letter that wasn’t true.”

The site visit, backers said, reinforced what was reported in the days and weeks following the explosive letter from state lawmakers: the military was heavily consulted about, and did not object to, Amazon Wind.

On the eve of the president’s inauguration, the U.S. Navy told the AP the Amazon wind farm would not interfere with a military radar installation just across the state line.

The Daily Advance reported that Avangrid had reduced the number of turbines from 150 to 104 in response to the Navy’s concerns about the radar in Chesapeake, Virginia. The Navy will “conduct post-construction testing of the Avangrid wind farm this year to validate the compatibility modeling that was performed,” a spokeswoman told the Elizabeth City newspaper.

And while President Trump has a thick file of public statements against wind power (more than 60 tweets over the years, according to AP), military leaders told Energy & Environment News “alt-Energy momentum won’t stop with Trump.”

The tour seemed to convey more than dry information about standard military consultation procedures for wind farms; instead Copleman of Avangrid said they tried to “provide an educational experience.”

“You stand under a wind turbine, and you realize what amazing machines they are,” said Kollins with the Southeastern Wind Coalition. “What I really saw on that trip was legislators being able to see for themselves that these machines are congruous with the current landscape and land use.”

Steinburg couldn’t be reached for a reaction to Moore’s statement, but said last week of the speaker, “I believe he was part of a group that witnessed something undeniably good.”

“There is a small group of people who are anti-wind, and it really doesn’t matter what you tell them, they’re going to be anti-wind,” said Steinburg, who expects state senators to try again this year to limit wind farms near military installations, as they did without success in 2016.

House Majority Leader Rep. John Bell of Craven County, the only other legislator besides Moore who attended the tour and signed the anti-Amazon wind letter, does not appear to have been much moved by the trip.

Pointing to his recent interview with WUNC radio — in which he reiterated the letter’s assertion that “political correctness” led the military to condone the wind farm — Bell’s office said he wouldn’t make any other public comments on the matter.

But Bell did tell WUNC he wasn’t against wind power; he was just concerned about preserving the benefits Fort Bragg, Camp Lejeune, and Seymour Johnson Air Force Base bring to Eastern North Carolina.

That’s why clean energy proponents are hoping Bell could come around to Moore’s apparent view that the military and wind power aren’t mutually exclusive.

“If we work together, our state can successfully balance the concerns of our military service members interests with major new developments like the Amazon Wind Farm to ensure the long-term vitality of renewable energy resources and military installations on our coast,” read the speaker’s statement.