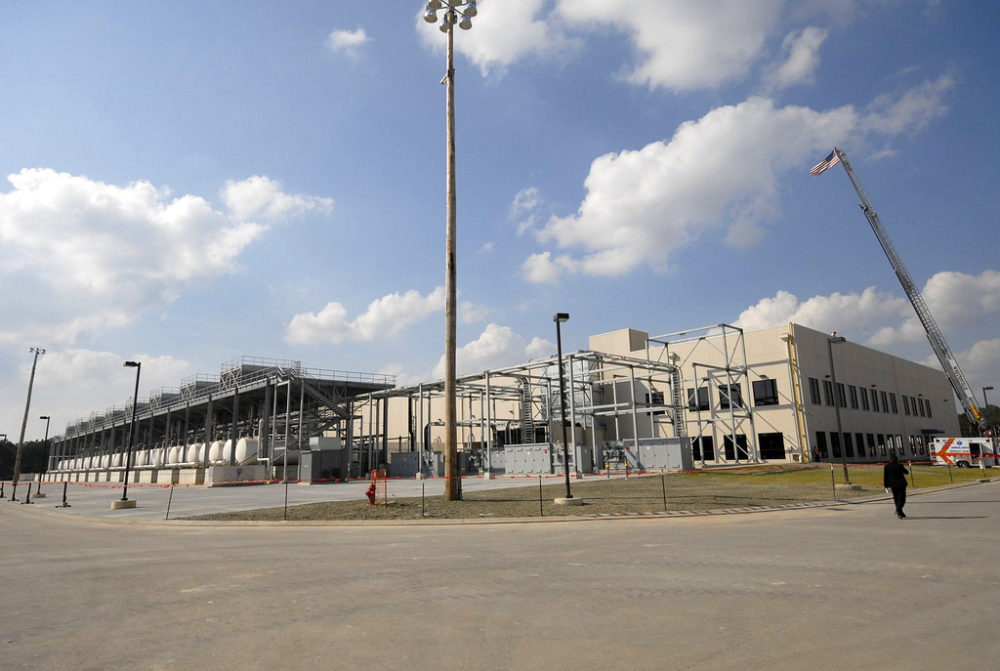 Advocates say attracting new data centers, like this Google facility in South Carolina, should be a strong motivator for utilities to support power purchase agreements.

A bill to permit large electricity customers to bypass their utility and purchase power directly from a renewable generator is before the Missouri General Assembly for the third consecutive year. And the support among corporations for such a law is growing, according to one of the bill’s authors.

“There are a whole lot of companies that would be interested in Missouri if not for the inability to get renewable energy” here, he said.

Major corporations nationwide have adopted policies to ramp up their use of renewable energy. Many of them are aiming, eventually, to use only renewable energy. Seven of them – Procter & Gamble, Wal-Mart, Unilever, General Mills, Target, General Motors and Nestle – have signed a letter supporting the PPA bill this session. Wilson expects more of them to sign onto the letter, which he is now circulating among the legislators.

The Missouri Energy Consumers Group, an alliance of large electricity customers, also backs the bill. However, the group’s legislative representative, David Woodsmall, would not specify the names – or the number – of supporters.

“At some point, if this comes up for a hearing, I will be there supporting it because certain of my members have made renewable commitments, and this better allows them to meet those commitments,” Woodsmall said.

The bill has not yet been assigned to a committee, an early step in the legislative process.

‘The utilities shouldn’t lose any money’

The PPA bills of the past two years didn’t go far in the Missouri legislature, but Wilson said “we feel this year’s language is a lot better thought-out and workable.”

The current bill differs in a couple of significant respects from last year’s bill, differences that Wilson believes will bring more legislators on board. Most importantly, it calls for a pause when the total rated generating capacity of renewable-energy contracts reaches 3 percent of the utility’s single-hour peak load.

At that point, the utility is to file a report with the Public Service Commission – or other governing body in the case of rural electric cooperatives and municipal utilities – that describes the impact of the power-purchase agreements on its operations. The governing body would then assess any potential cost shifts between rate classes and would address those by modifying the tariff.

The bill would allow utilities to seek compensation for moving electricity from the renewable generator to the contract customer. It states that utilities may charge a fee based on the cost of providing transmission, distribution, monthly capacity, administrative services and any actual power needed in excess of that provided by the renewable generator.

“The utilities shouldn’t lose any money as a result,” Wilson said. “Whatever costs they incur, we want them to be made whole.”

Missouri’s utility industry is approaching the bill with caution, according to Trey Davis, president of the Missouri Energy Development Association (MEDA).

In an e-mail, he wrote, “We are unsure of the need. Some of MEDA’s electric members are moving forward with community solar and solar partnership programs, even without this legislation, that accomplish the goals of the bill.

“Also, the legislation appears to create an opportunity for large customers to acquire power from other regions without necessarily paying their fair share for the costs of the grid needed to serve them, which would unfairly increase prices on all of the other customers in the service territory.”

The bill applies to electricity customers with a demand peak of at least 1 megawatt. Although corporations have been driving this sort of legislation in Missouri and elsewhere, Wilson said that other customers could qualify. The bill stipulates that demand can be calculated using multiple meters. That means that a large customer with many meters – say a university campus or school district – likely could meet the threshold of 1 megawatt.

In fact, he said he thinks even homeowners could qualify, as long as together their yearly demand was at least one megawatt. One hundred homeowners with at least 10 kilowatts of demand could meet the minimum threshold for size, he said.

Wilson said Renew Missouri decided to target its legislative efforts on legalizing power-purchase agreements because of the issue’s apparent resonance when the non-profit hired a firm to conduct a statewide survey in September, 2015.

“It was the most popular of the things we polled,” Wilson said. “Seventy-five percent of Missourians who answered said, ‘Yeah, Missourians should have the right to contract for renewable energy.’

“We didn’t have to talk to companies to get them interested. They have their own sustainability plans. We were just looking at where the momentum is and saying, ‘There is momentum to this nationwide. Why not just copy what works?’ ”

At least 26 states – including Illinois, Iowa, Michigan and Ohio – allow electricity customers to obtain power from an entity other than their local utility through a power-purchase agreement.

Although utilities might stand to lose revenues if existing customers use power-purchase agreements to turn to renewable sources, one clean-energy consultant said it’s important for utilities to look at what they stand to gain if renewable power from some other power generator becomes more accessible.

The only significant source of electric load growth in the nation is data centers, said Ryan Hodum, an advocate of power-purchase agreements and vice president of David Gardiner and Associates, a clean-energy strategy consulting firm. And because operators of large data centers like Facebook and Google have made it clear that they are in the market for clean energy, Hodum said states wishing to create jobs and revenue should listen to that message.

“More options for renewable energy equals economic-development opportunities,” he said. “That’s particularly true for states that are seeking to attract the IT (information technology) industry. I’d look at this proposal as one that does two things: it could meet the needs of existing customers, and it could attract future customers.

“The question for utilities is: do you have a desire to attract Facebook and Google? If the answer is ‘yes,’ this conversation is about increasing options for renewable energy should be one where you’re at the table, engaging in proactive ways.”