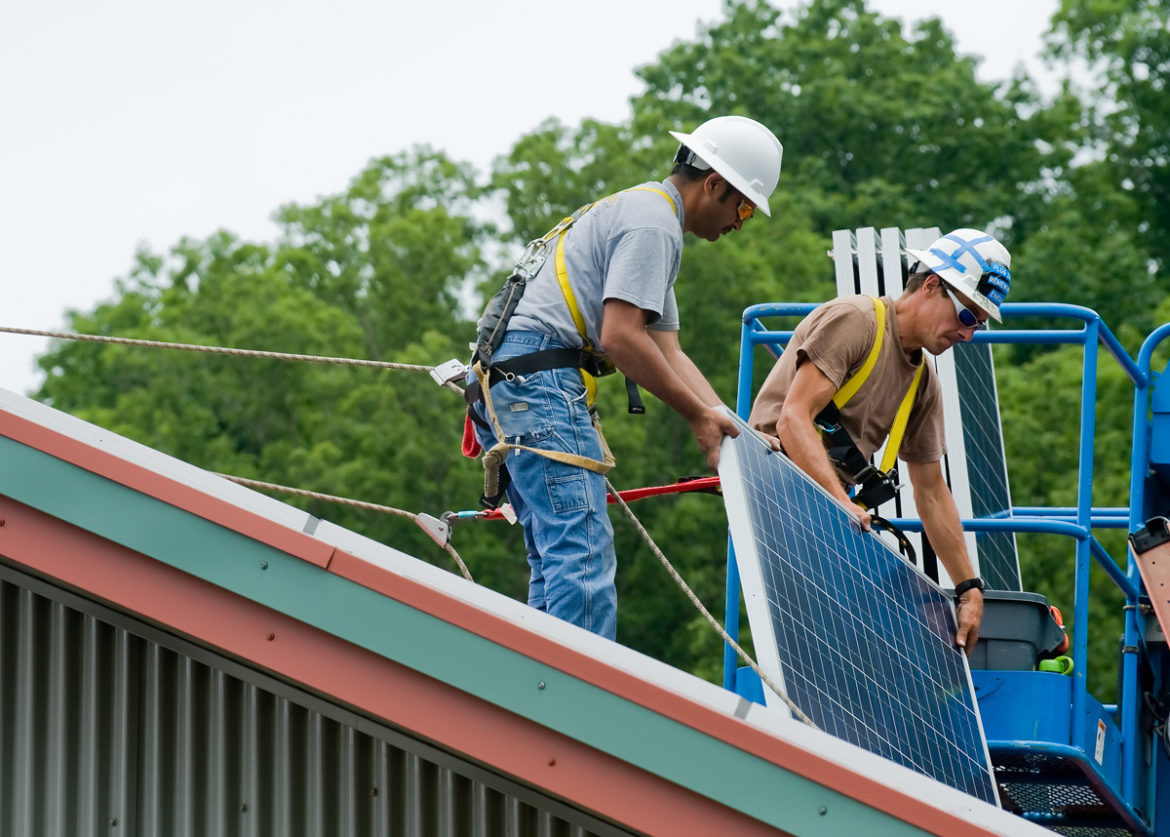 Workers install solar panels at a facility in Wayne National Forest in Ohio.

Ohio added more than 1,000 jobs in the solar energy field last year and remains one of the top 20 states for employment in the industry, according to a new report. But the situation isn’t as sunny as it could have been, in the view of some company leaders in the state.

The National Solar Jobs Census 2016 found that job growth in the solar industry outpaced the U.S. economy by 17 times with the addition of more than 51,000 jobs last year. Overall solar job growth since 2010 was 178 percent, according to the The Solar Foundation’s February 7 report.

Total figures showed more than 260,000 people who spent at least half of their time on solar-related duties, of whom 28 percent were women or racial and ethnic minorities.

“Solar employs slightly more workers than natural gas, over twice as many as coal, over three times that of wind energy, and almost five times the number employed in nuclear energy,” said the report.

Greater demand and continuing cost declines are credited for the job growth. “In 2016, we saw a dramatic increase in the solar workforce across the nation, thanks to a rapid decrease in the cost of solar panels and unprecedented consumer demand for solar installations,” said Andrea Luecke of The Solar Foundation.

Company leaders say Ohio could have done much better if its lawmakers had not frozen targets under the state’s renewable portfolio standard at the 2014 level through the end of last year.

“Without SB 310, our job growth would have been at least double, more likely triple,” said Alan Frasz at Dovetail Solar and Wind in Cleveland. Before that 2014 law took effect, employment in the industry had grown at much higher rates, he noted.

“Ohio’s job growth would absolutely have been higher without the freeze,” agreed Steve Melink of Melink Corp. in Milford. Although Ohio was a “national leader” when the state’s renewable portfolio standard was first adopted in 2008, “now we have fallen behind most states and many countries around the world,” Melink added.

The freeze imposed by the 2014 law ended in December when Gov. John Kasich vetoed a bill that would basically have made compliance with any additional requirements voluntary for two more years.

Ohio’s renewable energy and efficiency standards have now resumed, subject to other provisions in the 2014 law that made the requirements less stringent.

Nonetheless, Ohio state Rep. Bill Seitz (R-Cincinnati) — then in the Ohio Senate — suggested there could be yet another attack on the standards. “We will do our part by launching a full-scale effort next session to totally repeal” the clean energy standards, Seitz said in a statement after Kasich’s December 27 veto.

‘Invest where we are wanted’

“To reopen an effort to freeze, kill or weaken Ohio’s already laggard RPS is pure foolishness,” Frasz said, noting overall growth nationwide in the industry. “I would really question Sen. Seitz’s motives for wanting to discourage Ohio fully participating [in] this very high-growth industry. He is not looking out for what’s best for Ohio.”

Seitz announced in December that he had decided to put solar panels on his own home in order to take advantage of a federal tax credit. “You don’t need mandates if they’re handing out cash,” he argued during the Ohio Senate’s evening session on December 8.

However, advocates and industry leaders say strong state standards help attract investments that would otherwise go to other states. Toward that end, they hope for some stability and certainty in those standards as forecasts predict continued job growth in the solar industry

“We need to be taking steps to encourage and support renewable energy businesses who are already in Ohio, and aggressively recruit firms that are looking to locate here,” Frasz said. “Otherwise, we are likely to miss out or marginally benefit from this explosion of jobs in the next five years.”

Meanwhile, as a result of the freeze under SB 310, most of Melink’s new business over the last two years has gone elsewhere.

His company’s customers are 95 percent out-of-state and five percent in-state, Melink reported. “We are continually developing more and larger solar projects in other states, and as a result our pipeline has never looked stronger,” he said.

But, Melink added, “Between the freeze in Ohio and the strong RPS incentives in other states, we invest where we are wanted.”