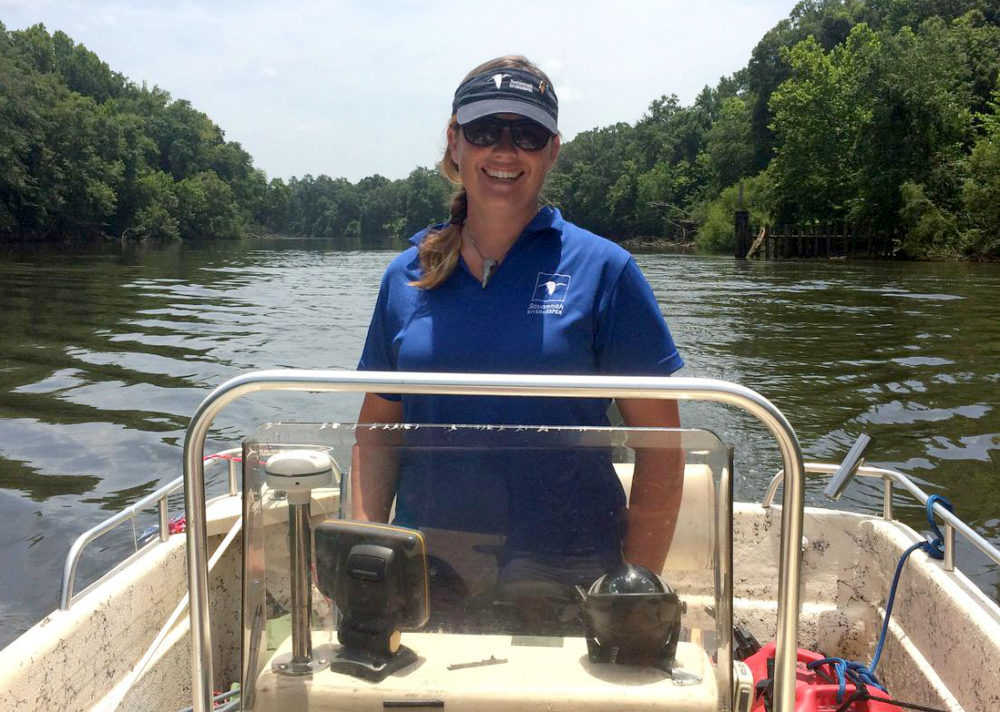 Tonya Bonitatibus is the executive director of Savannah Riverkeeper.

Tonya Bonitatibus, Executive Director of the Savannah Riverkeeper in Augusta, Georgia, describes herself as someone who is “a bit rough around the edges,” and loves to “be outside, and drink beers with my rednecks.”

She helped galvanize the surprisingly successful coalition that stopped the $1 billion, 360 mile Kinder Morgan Palmetto pipeline in its tracks, and is involved in an 11-member commission to extend a moratorium on oil pipelines in Georgia, and permanently revise regulations on such pipelines.

The auburn-haired, 36-year old mother of two boys lives on the Augusta property her great-great grandparents bought in the 1950s.

“I come from a long line of military men and civically-minded women,” she explains. She grew up, she says, on the side of town that was 80% African-American, and also attended private school. “I was exposed to every kind of person from all walks of life. That’s why I don’t think anybody is better than anybody else. People sense that and it makes me a better advocate.”

The face of successful environmentalism today is changing, says Bonitatibus. “My coalition identifies itself as conservationists, and we are diverse people, economically and demographically. I’ve cultivated that coalition for ten years. That’s one very strategic thing I’ve done.”

As executive director of Savannah Riverkeeper, Bonitatibus oversees a 300 mile river that originates in the mountains of North Carolina and flows to the Atlantic Ocean near Savannah, Georgia. Ecosystems within the basin include agricultural systems, upland forests, bottomland hardwoods, pine plantations, free flowing streams, dams, swamps, and freshwater and marine marshes.

Bonitatibus recently spoke with Southeast Energy News about the southern riverkeeper strategy, and how it contrasts with the strategy at Standing Rock, North Dakota, where she spent ten days in 2016 to learn the difference between her approach and theirs.

“Our strategy is 180 degrees different than the strategy at Standing Rock,” she says, “or for that matter, most of the United States. I don’t mean to toot our own horn but we have done it differently than others.”

Southeast Energy News: How did you get into the pipeline fight in the first place?

Bonitatibus: Landowners called us because Kinder Morgan had showed up at their doors requesting a survey. They figured there was no reason to fight because Kinder Morgan had told them they were going to lose. If there was ever a David and Goliath situation this was it. But I’ve done needs assessment throughout my career. I’ve had multiple wins, such as the request for a permit to build a dock at Bull River, which was turned down because there was not a need for more marinas in Savannah.

And the idea of taking people’s land when you don’t have a public need, when you are a private company … well, in Georgia you have to go through a regulatory process. You have to prove the need, and they couldn’t. Georgia is unique because we already have laws regulating the process an oil pipeline has to go through to use eminent domain. That’s because back in the early 1990’s a pipeline leaked in the pecan orchards of one of our legislators, State Representative Robert Ray, and killed his pecan trees. He formed a commission and they came up with new regulations for pipelines. There are five or six other states that have laws on the books like we do.

What did you tell those landowners?

I told them you are my people and you’ve been my people for a long, long time and we all have to drink the water. You see, the people who call themselves Republican here, they are my conservationists. They love the land. The wetlands along this river are our liver and kidney system and there are 1.5 million people drinking out of this river. The pipeline easement will go through my wetlands and interrupt its ability to clean itself and kill thousand year old cypress trees. Water is not a Democrat or a Republican issue. Everybody needs clean water.

In all my life, I’ve never seen people galvanize quite like they did against this pipeline. I learned in business school that if you make a line graph going from zero to 100, that 20% on the far left will be with you no matter what, and 20% on the far right will never believe in you, and what you are really after is the 60% in the middle. But their values may be different than yours. You speak to them in a way that resonates with their values. We focused on what we had in common, which allowed people to work with others they might never have thought they’d be sitting in the same room with.

You went to Colonial Oil Industries, a company with a port in Savannah, and essentially joined forces with a local oil company to fight a much bigger national company?

Yes. Savannah is the third largest port in America and Colonial supplies gasoline for the coastal regions along Georgia, and their owner, Robert Dempsey, has always been a key member of our community. Kinder Morgan is talking about doubling the amount of gasoline that goes into Savannah, well, I’m not an idiot. They’re not doubling the amount of gasoline into a city without pushing somebody else out of the market. That would be Colonial, and so I asked them to join us.

Last year I went to a conference in Atlanta where pipeline activists from all over the US came together, and I was sharply criticized by some of the environmentalists because I had worked with Colonial Oil to defeat the pipeline. They were saying we have to get rid of fossil fuels to stop climate change. But, I’ll be perfectly honest with you, I drive a Toyota Tundra for work. I have to go off-road today to go see, ironically, a Kinder Morgan oil spill in South Carolina. That’s a large truck and the technology is not there yet for me to put sugar or water in my gas tank. I am still using oil, and though I want to move forward with renewable energy, right now I rely on fossil fuels.  If we had talked about ending fossil fuel use — then Colonial Oil would not have been with us.

I can also tell you there was never a spill that Colonial wasn’t on top of it immediately like white on rice. They are responsible. They never used eminent domain, they never took owners’ property rights. They bought the land they wanted. They have started diversifying into green energy, buying up solar and wind. I don’t think I can ask much more of a company.

We also reached out to property rights advocates in the Forestry Commission, and the farm bureau, and they usually fight the ‘environmental’ movement. But they fought the pipeline with us.

In contrast, what did you learn when you went out to North Dakota to spend time at Standing Rock?

I went out a day after the dogs had been released to bite protesters. I wanted to figure out why their situation was so much different. They had close to 5,000 people camping out, and it wasn’t working. They had armored police barricading them.  The outcome is still uncertain.

That was when I learned how important the waterkeeper and riverkeeper model is. DAPL did not have that. We are the largest growing organization that is protecting water globally. There were five riverkeepers in Georgia and South Carolina fighting the pipeline. All my keepers, whether in Georgia or worldwide, are crucial in effecting change.

How are you different?

We are true grassroots and we know our community better than most.  Part of our success with Palmetto is due to ten years of coalition building. That’s not something they had at Standing Rock. They had people trying to get updated very quickly, and navigate a world they weren’t necessarily used to. North Dakota doesn’t have any state permits, and the need all fell on the Army Corps of Engineers. The state lacked a regulatory procedure.

Second, their approach was very much through spirituality, such as prayer camps. I totally respect that, it was a decision made among the Native Americans. But when they pointed out that their lands that shouldn’t be disturbed, they were ignored and bullied. I’ve never seen anything like the racism in North and South Dakota. I was blown away by it.

What lies ahead? Will the pipeline issue return?

There are moratoriums in both Georgia and South Carolina. South Carolina’s will last another two years. Georgia’s is due to expire June 30, but the commission has recommended extending it so they can thoroughly review the complex issues and legislation surrounding petroleum pipelines and their development.

The next 6 months are going to be really exciting. We’ve worked with other riverkeepers to help introduce legislation that I think will eliminate or restrict eminent domain for petroleum pipelines. For instance, the Environmental Protection Department’s Director, Rick Dunn, suggests requiring an environmental permit prior to the construction of any gas pipeline project. Currently, the permit is required only for those portions of the pipeline obtained through eminent domain. He also suggested extending the 120-day review deadline EPD faces for petroleum pipelines. (You can read the report here.)

With the new Trump administration I expect more states to step up and tighten their restrictions so that the federal government and private companies cannot overstep their authority.