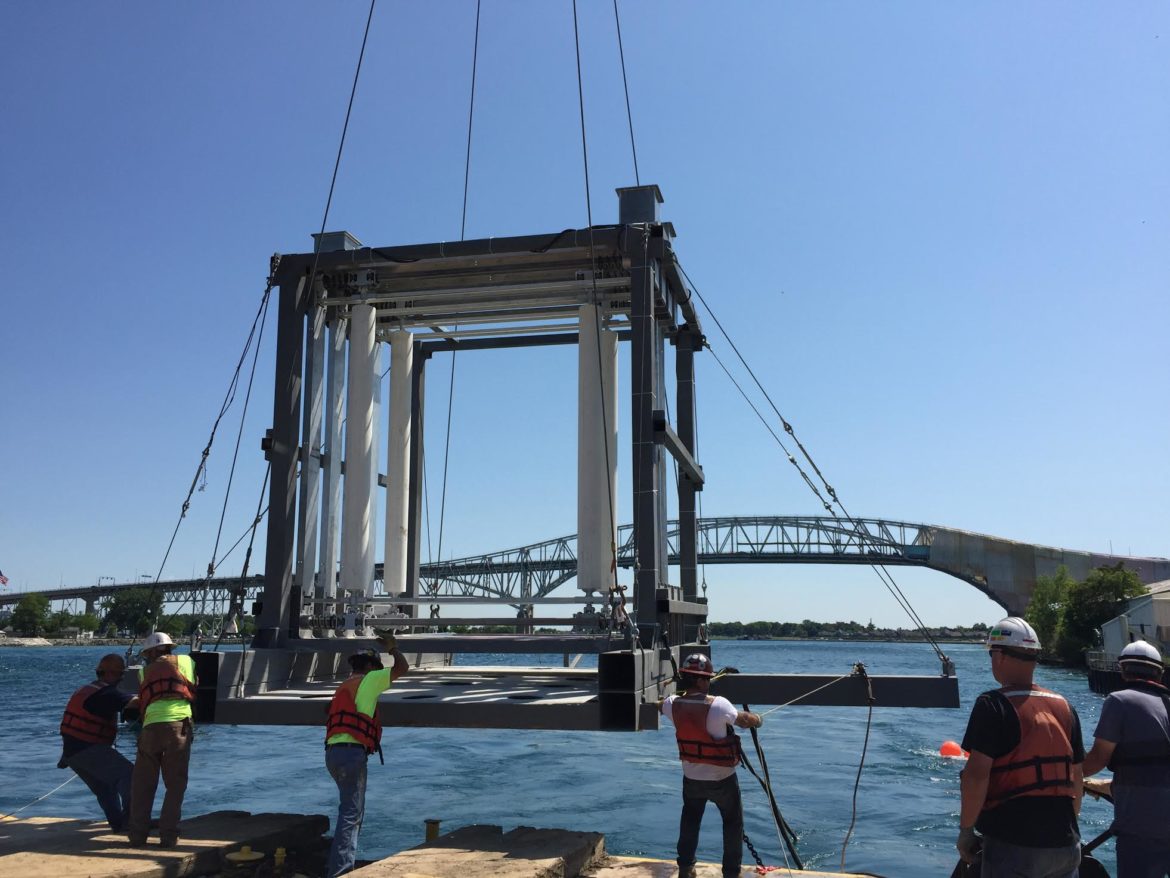 Separate research teams at Michigan’s two largest universities are pursuing advances in hydroelectric research they hope will have both local and global impacts.

Teams at the University of Michigan and Michigan State University are looking at social, environmental and engineering concerns with hydroelectric generation that have led to negative impacts on streams and wildlife as well as nearby residents.

Michael Bernitsas, a mechanical engineering professor at U-M, has spent the past several years refining his Vortex Induced Vibrations for Aquatic Clean Energy (VIVACE) device that uses cylinders to mimic the movements of fish schools and generate electricity underwater.

In the summer of 2016, his team tested a 16-foot by 12-foot prototype in the St. Clair River in southeast Michigan shortly after a breakthrough in his team’s understanding of how to make the VIVACE more efficient. Bernitsas says that in multiple instances, conventional engineering knowledge was of little help.

“If you have turbines one behind the other, the ones downstream will be affected by the ones upstream in a negative way,” he said. The team followed that concept by testing his cylinders at greater distances. “We looked at what fish were doing and started putting them closer together. When we got very close, we saw the synergy between the two cylinders.”

About a year ago, the team saw two cylinders producing between 2.6 and 7.5 times the energy produced by a single cylinder, Bernitsas said. A month ago, the team had “excellent results again” with three cylinders.

“Not only did we manage to get cylinders close to produce more power, but at the same time we made the volume occupied much smaller,” he said. “That’s important because the ratio of power over volume is the Achilles’ heel of all renewable energy technology.”

The VIVACE also has the potential to deploy hydro generation in a greater number of waterways. Whereas conventional turbines need water to move at an average of between 5 and 7 knots to work efficiently, Bernitsas said his cylinders have proven to work at slower than 1 knot.

Bernitsas’ background is in offshore engineering and designing structures to withstand “transverse flow,” which can be destructive to large cylindrical shapes.

About 10 years ago, it dawned on him to enhance that process to generate energy rather than suppress it.

Bernitsas founded the company Vortex Hydro Energy from his lab with the goal of commercializing his product, though funding makes the timeline for that uncertain. The deployment could vary depending on the flow and topology of the waterway.

“The idea is to make the device as compact as possible in order to increase the power-to-volume density,” he said.

Meanwhile, a team of researchers at MSU led by geography professor Emilio Moran were recently awarded a four-year, $2.7 million National Science Foundation grant to address environmental and social concerns with the siting of new hydro projects.

While Moran’s approach will have a more global scope, focusing on areas aggressively pursuing more hydro, he anticipates lessons learned can be applied in Michigan and throughout the region. The proposal is still in the early planning phases.

His research comes at a time when more hydro facilities in the U.S. are being closed than are opening, though major dam projects are being pursued in South America, Africa and Asia.

“Our work is addressing a global issue, but there’s a recurring problem when you build dams, you block the migration of fish, and that happens in North America,” Moran said. “Over time, people begin to see less of a benefit from hydropower generated by dams compared to the damages incurred. On top of that, there are social impacts to communities along the river who depend on fish and don’t have that fishery anymore. We’re asking the question: Should we be thinking of alternatives?”

While large-scale hydro construction is happening mostly outside of the U.S., Moran hopes to apply lessons about deploying better hydropower in the U.S. and the Midwest, or potentially finding a beneficial reuse of land when a dam is decommissioned.

“Could we move that sediment to agricultural fields to increase productivity, produce more food and produce energy in a way that is more favorable to the public?” he asked.

Moran’s team also includes engineers that are studying new turbine designs that are less harmful to a river’s ecology and modelers to find ideal locations for the turbines.

“Let’s not trash hydroelectricity given all its problems, let’s think about a way (to design it) that contributes to the environment,” he said. “I think it should contribute (to the energy mix), and the nice thing about hydro is that the river is always flowing.”