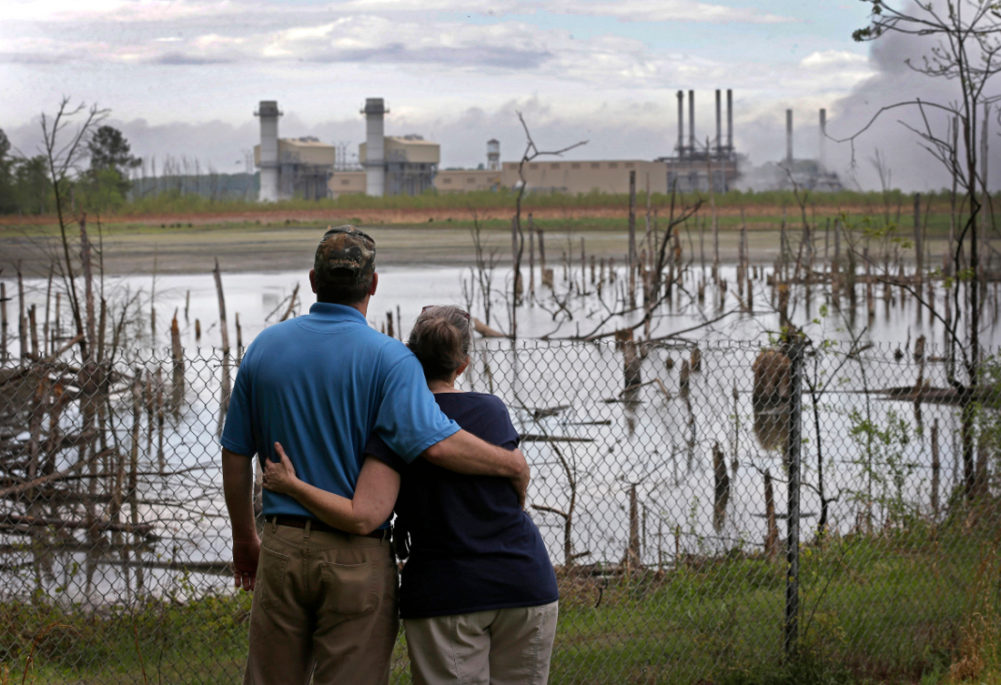 In this 2014 photo, Bryant and Sherry Gobble look from their yard across an ash pond full of dead trees toward Duke Energy's Buck Steam Station in Dukeville, N.C.

Amy Brown of Belmont, North Carolina was among nearly 1,000 residents last month who received a letter with a controversial proposal from Duke Energy: waive the right to sue the company in exchange for a cash payment.

Pairing the extra cash offer with the offer of a new drinking water system is prompting confusion and concern among coal ash neighbors like Brown, who remain deeply distrustful of the utility and leery about forfeiting any legal rights.

“We feel, as their neighbors, that we can’t trust them,” Brown said. “I feel like trusting Duke Energy is dangerous to our health.”

‘Our children know to not turn on the water’

Duke’s notices stem from evidence that contaminants from unlined pits of water mixed with ash, a byproduct of coal combustion, are leaking underground and poisoning nearby drinking water wells. The pollutants, detected in independent and government tests, range from the carcinogen hexavalent chromium to vanadium, which can cause nausea, diarrhea and cramps.

Amy Brown poses with stacks of bottled water in her home.

Alarmed enough by their own research, state officials advised hundreds of residents near coal ash dumps not to drink their water in the spring of 2015. While those letters were later rescinded under a cloud of controversy, last summer legislators passed a law requiring Duke to offer replacement water systems to all households within a half-mile of its 14 dump sites.

Throughout, Duke has denied responsibility for tainted wells, pointing to studies that show the contaminants in its ash are also naturally occurring.

But residents remain wary of relying on their wells. “Our children know now not to even turn on the water,” said Brown, who lives near Duke’s Allen coal plant and received a “do not drink” letter nearly two years ago. “You use bottled water.”

Brown is thankful for bottled water the company began delivering to her and hundreds of other households following the initial water advisory. But she says it’s no long-term solution. “We have stacks of water. It’s stacked up in our living room. It’s stacked up in our kitchen. It takes up space that used to be available in our home. Who lives like this?”

Beyond bottled water, the law passed last year requires Duke to offer Brown and nearly 1,000 other households near its coal ash dumpsites a new permanent water supply to replace their potentially-tainted drinking water: a connection to a nearby municipal water system, or a “whole home treatment system” that would purify the water from their wells. Duke must provide a new water supply to those who want it by October 2018.

One feature of the packet sent to residents, therefore, is a simple form asking well owners to select their “permanent water solution” or “opt out” by March 8.

In addition, Duke is offering a three-part cash offer plan. First, a goodwill payment of $5,000. Second, for those who choose a water line connection, a flat sum equivalent to 5,000 gallons of water a month for 25 years at the current municipal rate — up to $22,000. Finally, for anyone who sells their home before October 15, 2019, the company will cover any difference between the home’s sale price and its fair market value.

The payments come only to those who sign a waiver agreeing never to sue the company for medical, property value, or other damages. (There’s no waiver yet for the “property value protection plan,” but the company said “there probably would be” once the specific compensation amount is determined.)

For Brown, who worries she or family could yet get sick from drinking tainted well water, it’s not a fair trade.

“We live with the uncertainty every single day of what we’ve been exposed to, and more importantly, what our children have been exposed to,” she said. “I have two small boys, and I think, ‘How many meals have I given my children with this well water? How many pacifiers did I rinse out in the sink and put it in my child’s month? How many coolers of ice water did I fill up for my son when he was playing sports?’”

She points to a 2009 report that shows those living near coal ash dumps face elevated cancer risks.

“The average cost of chemotherapy is $10,000 a month, and you want us to sign a medical release as well?” she cried. “Everyone has to make their own choice. But to sign a waiver that would tie our hands —  for us that’s just not a responsible choice as parents.”

‘They don’t know what it is they are agreeing to’

The law is clear that Duke must offer water replacement plans to all households – not just those who waive their right to sue. Duke spokeswoman Paige Sheehan is also clear. “The most important thing is that this package is voluntary. We’re offering you something and it’s your choice,” she said.

But critics say the packets sent last month to households are not clear. Combining the cash offer and the water replacement offer “could lead to confusion where folks believe they are opting out of one, but are actually opting out of the other, or vice versa,” said Amy Adams with Appalachian Voices, an environmental advocacy group that focuses on coal’s impact on the region.

Brown agreed. “That is true, because my neighbors are confused; some of them are confused. They don’t know what it is they’re agreeing to.”

Sheehan acknowledged that the company “mailed a lot of information” that could cause murkiness, part of the reason the company is holding information sessions on the dual offers in the coming weeks.

But combining the offers was a deliberate decision.

Duke is legally obligated to maintain the home filtration systems, but it doesn’t have to pay future water bills for those newly connected to a municipal water line. The law also gives preference to water line connections, causing heartburn for some residents who are used to drawing water from their own wells without monthly payments.

When the law passed last summer, Sheehan said, “what we immediately heard from folks was that they were very concerned about the financial implications.”

In making the extra cash offers, Duke has another clear motive, which relates to the pressure it faces to remediate its coal ash dumps following the 2014 Dan River catastrophe, which coated 70 miles of the river in ash.

For its six dump sites not under court order to be excavated, the company wants the flexibility to drain the ash pits of water and cover them, a technique known as “cap in place.”

That’s part of why the company supported last summer’s law. It says that once water replacements have been provided for nearby residents who want them, the sites will be classified as “low risk,” giving Duke the option to cap rather than excavate them.

The water replacements could occur without the extra financial inducements. But the company appears to see both as helping it achieve its goal of “cap in place.”

“Once we complete the projects, we preserve the right to cap those basins,” said Sheehan. “It is safe to say that we are very focused on completing the water projects successfully.”

‘They want to put this behind them’

Whatever the company’s motivation for making it, many residents could well take Duke up on its offer. They may need the money, even if must pay income taxes on it later. Older residents, especially, may be eager for closure. “They want to put this behind them and go on with what time they have left in their community,” said Adams of Appalachian Voices.

The company says up to $22 million could go to the cash offers, an amount that would be borne by shareholders, not ratepayers.

Adams, who spent ten years as a regulator with the North Carolina Department of Environmental Quality, said that kind of investment wasn’t unusual for corporations.

“Uncertainty is bad for business,” she said. “They can’t calculate profit with this unknown lawsuit or unknown settlement amount hanging out there. This is a payment to alleviate that uncertainty and get back to business as usual as quickly as possible.”

Duke neither confirmed or denied that theory. Instead, Sheehan pointed to the company’s hope of “cap in place” for its coal ash pits. Asked whether excavating those remaining six sites at issue would be more expensive than the potential outlay of $22 million, Sheehan was emphatic.