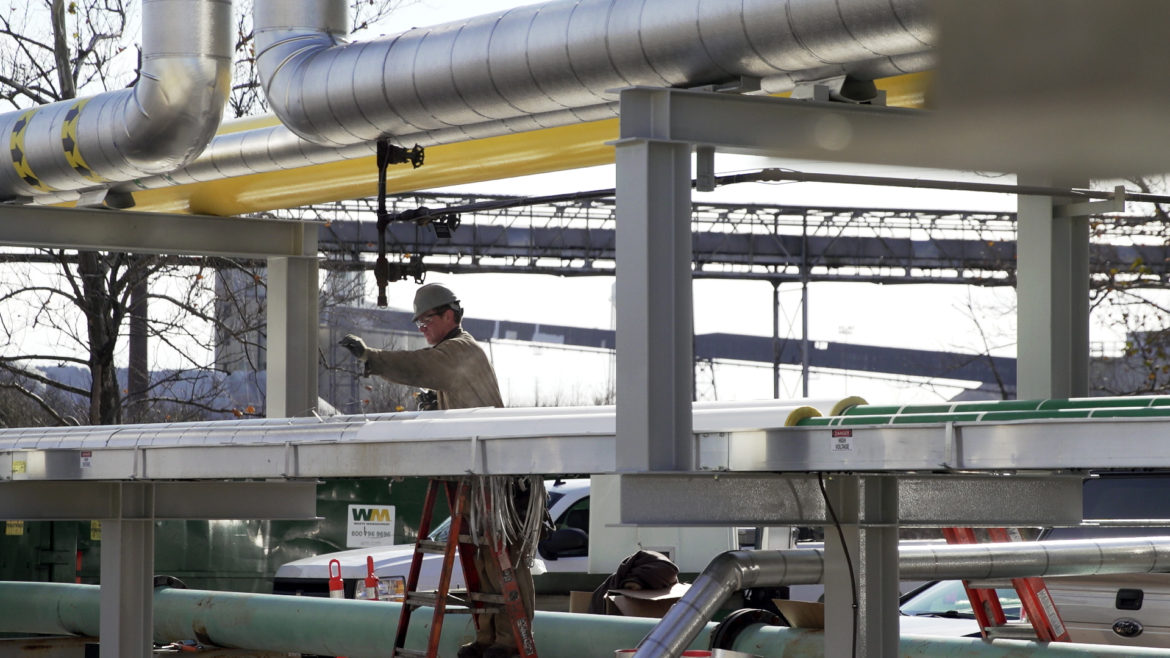 It used to be that a train of coal arrived every day at the Joliet coal plant 40 miles southwest of Chicago. Forty-seven conveyor belts fed the coal into units on either side of the Des Plaines River. And workers busily transferred the coal from the train and maintained the system.

Today there are no more coal trains. But Joliet is not among the scores of coal plants that have closed in recent years. Instead, it burns natural gas. A number of coal plants nationwide have converted to natural gas, a move that uses much of the same infrastructure but involves different economics, less pollution and fewer workers.

Unlike the coal plant which ran nearly around the clock, the Joliet plant, owned by NRG, now fires up and down more frequently depending on demand and profitability. The plant sometimes goes weeks or months without operating. Along with payments for the power it produces, the plant also collects year-round payments for capacity – the promise to be ready to generate a certain amount of electricity if needed.

“We’ve got a different price structure now,” said plant manager Bill Naglosky. “Gas is a higher-priced fuel than coal. We’ve gone from being a base-loaded unit to not a peaking unit but more seasonably loaded. When the weather gets cold and a lot of electric heat is on in the city, the price of power goes up, demand goes up. We’ll be on in the winter and in the summer, that is what justified the project. With coal, we pretty much ran all the time.”

The conversion has meant projected emissions reductions of 99.9 percent for sulfur dioxide, 97 percent for particulate matter, 34 percent for nitrogen oxides, plus a carbon dioxide reduction, according to NRG spokesman David Gaier.

The Joliet plant was part of the same fleet as Chicago’s coal-fired Fisk and Crawford plants, which could not compete on the market and closed in 2012. A city ordinance had once suggested converting those plants to natural gas, but the company that owned the fleet at the time, Midwest Generation, said it would not be a financially viable option. NRG bought the fleet including the shuttered Chicago plants in 2014.

Naglosky had also been plant manager of Fisk and Crawford. He ran nuclear plants in the mid-1980s and coal plants since the early 1990s. In December, NRG announced the full conversion of the Joliet plant and also coal-to-gas conversions at its plants in Shawville and New Castle, Pennsylvania, and in New Roads, Louisiana.

There are three more plants remaining in the Illinois fleet NRG bought from Midwest Generation: a plant that it leases in Powerton in central Illinois, one in Romeoville not far from Joliet and one in Waukegan north of Chicago. Locals and experts have predicted the Waukegan plant will close in coming years, but Gaier said that the company recently invested nearly $100 million in upgrading the plant for continued operations.

“We are continually evaluating all the units in the fleet to determine if gas conversion is an option based on a multitude of factors including environmental, economic and market,” Gaier said.

“The most likely candidates for a coal-to-gas conversion are 50-plus year old units, less than 300 megawatts in capacity and generally early generation sub-critical utility boilers – the least efficient, most costly to operate and with the lowest overall capacity factor in the coal fleet,” he wrote. “Most plants west of the Mississippi River built in the 1960s or later aren’t as attractive as candidates for fuel switching since they are often larger, more efficient and tend to burn Powder River Basin coal, a cost effective fuel with a more favorable emission profile than the bituminous burned by many eastern plants.”

Gossard noted that the primary driver of conversions was the EPA’s Mercury and Air Toxics Standards (MATS), not the Clean Power Plan which could likely be negated by the Trump administration.

“It would appear that the coal to gas conversion market has peaked and is now on the decline,” Gossard wrote, as MATS deadlines were imminent and most companies have already planned for them. “Overall, switching to gas, even at current gas prices, is generally not an easy economic choice considering the capital cost, fuel costs, cycle efficiency, and future regulatory uncertainty.”

Rather than switching entirely from coal to gas, coal plants can also be converted to burn coal and gas simultaneously or switch back and forth between the two fuel sources. The Electric Power Research Institute (EPRI), a nonprofit research organization serving its member electric utilities, notes that co-firing raises more costs and challenges but can yield more benefits than total conversion.

“Gas conversions, as opposed to co-firing, poses technical issues significantly less challenging than gas co-firing,” said John Marion, EPRI director of research and development for generation. “The movement to gas conversions is well understood in the industry as being near-term in focus, avoiding expensive investments” in required pollution controls. He noted that it costs more to produce electricity after a conversion, but the plant can often be used as a peaker plant, selling electricity when demand and prices are high.

Gaier explained that at the Joliet plant, new natural gas burners “bring gas into the boiler in much the same way as pulverized coal was previously introduced.”

“Most of the existing generation equipment requires no modification and operates just as it did on coal with exception of the fuel type,” he said. Equipment to unload and handle coal, however, is rendered obsolete.

“Often you’ll see previously-converted gas plants that still have coal handling equipment in place that hasn’t been used for years or decades,” he said.

Naglosky noted that NRG worked to obtain right-of-way for new gas lines and paid to build them. The plant is served by two separate lines, so in case one is occupied feeding local residences, the plant will be guaranteed supply from the other.

During recent cold winters, most notably the “polar vortex” in 2014, some coal plants around the country were idled or forced to reduce generation because coal piles froze. Proponents call natural gas a more reliable fuel source for cold winters, though Naglosky noted that the Joliet plant continued operating during the polar vortex, moving coal from one pile to another in order to prevent freezing.

Without the loads of coal to process, fewer employees are needed at the Joliet plant. Eleven people were laid off because of the conversion, while 51 people took early retirement with incentives and 37 transferred to other power plants, Naglosky said. In all, plant employment dropped from 151 to 54. Naglosky said the company worked with local junior colleges to let employees know about other jobs and opportunities.

“I think they took it in great stride,” Naglosky said of plant employees.  “NRG did a very good job in explaining the alternatives, that we’re not sitting back and waiting for the market to affect us,  that we had to close the gate. With a multi-, multi-million dollar project, they realized with that kind of investment the jobs that did remain would be very good.”

He said management worked with the IBEW labor union to negotiate promotions for all the workers who remained. “Everyone here has added responsibility and pay increases,” he said.

Naglosky said that when he started running coal plants a quarter-century ago, he never expected to see a wave of closures. But three of the plants he formerly ran are closed now, Fisk and Crawford plus the now demolished State Line coal plant on the Indiana border south of Chicago.

“At the time everybody thought, ‘There’s so much coal in the ground,’ we thought it would go on pretty much forever without much change,” he said.

Editor’s note: An earlier version of this story misstated the name of the river the Joliet plant is located on.