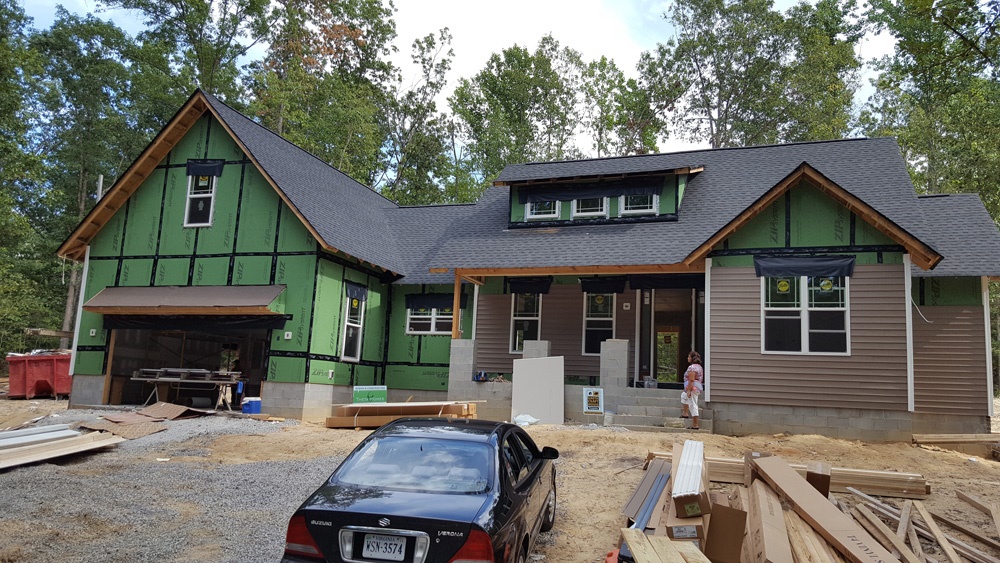 An Earthcraft certified home under construction in Virginia.

Home efficiency advocates and homebuilders are squaring off in Virginia over what many stakeholders say is an overdue update to energy codes for new home construction.

A public comment period that began February 20 runs through April 21 with open meetings and an online portal. It is to be followed by a public hearing May 15 in Richmond. Gov. Terry McAuliffe will have the opportunity to add his efficiency recommendations before he leaves office at year’s end.

Despite the opportunities for public input, the interim path is a complex one and depends on interested parties making sure their views are heard and then surviving a vote that is heavily influenced by homebuilders.

Ultimately, any energy changes in the state’s residential new construction code will be decided by the board of the Department of Housing and Community Development, which includes several private homebuilders and developers.

“Virginia’s code leaves a lot of room for improvement,” said Nick Brousse, a Fredericksburg, Virginia resident who is a project manager on residential energy efficiency at the U.S. Green Building Council (USGBC). “More and more of Virginia’s elected officials are realizing . . . energy efficiency is a job-creating industry that saves families and businesses money.”

Homebuilders have been the biggest obstacle to boosting home efficiency to keep their costs down. Their lead lobbyist – Virginia Homebuilders Association CEO Mike Toalson – said he intends to keep it that way.

Toalson said the homebuilders association will continue to oppose changes to the base, minimum code “that will … increase the cost of new housing in Virginia. The minimum code has a requirement in it for safety and reliability” and that’s as far as it should go, not more efficiency requirements, he said.

‘A lot of voices in the room’

That said, this year could be different.

Among the widely-cited ratings of where states stand on overall energy efficiency, the American Council for an Energy-Efficient Economy ranks Virginia 33rd. The Southeast states with the highest rankings are Tennessee and Florida, tied at 25th. The U.S. Department of Energy tracks building code changes and rates states here.

Efficiency advocates say significant yet low-cost upgrades for improvements in attic and wall insulation and insulating foam sleeves on hot water pipes, plugging leaks in heating and air-conditioning ducts and setting a higher standard for replacement windows can go a long way to saving homeowners significant sums of money over a 20-30-year life of a home before any remodeling.

Added up, LEAP’s Grigsby and and USGBC’s Brousse are quick to spotlight the cumulative benefit of reduced home energy usage and how it reduces demand for new power plants while cutting greenhouse gas emissions they produce, a priority for McAuliffe. Because McAuliffe cannot succeed himself under Virginia law, this is his administration’s last shot to improve the residential code.

Grigsby said Virginia is operating at something slightly better than the 2009 model International Building Code while other states already are complying with the 2015 model code. The pushback comes not just from homebuilders, but from some local code officials, many with close ties to homebuilders. Those local officials comprise a majority of the Virginia Building Code Officials Association which, stakeholders agree, in turn has the most influence in how codes are seriously considered at the Department of Housing and Community Development.

In addition to three state officials, six of 11 persons appointed by McAuliffe to the 14-member Board are builders or developers. Three of the other five work in professional efficiency roles or a non-profit advocating for improved low-income housing.

Overcoming the homebuilders’ influence will define to what degree, if any, efficiency advocates succeed in persuading the Department of Housing and Community Development to accept any material upgrades in this cycle. Reviews take place every three years.

Hayes Framme, the governor’s point person on the code update who is the Deputy Secretary for Commerce and Trade, said McAuliffe is aware of the need to counter-balance the inputs of builders and developers who want to construct as many new homes as quickly as possible. McAuliffe “has worked hard to make sure there are more diverse perspectives on the board,” Famme said.

If the current, outdated, 2009 code persists, Grisby said Virginia will continue to fall farther behind because amendments proposed in 2012 review cycle haven’t been adopted and actually were watered down. “Adopting the 2012 code would have represented a 25% improvement for Virginia over 2009,” he said.

“Any new homebuyer in Virginia should have the expectation that their new home is up to a code that reflects modern advances in energy efficiency,” Grigsby said.

There is an ad hoc committee of energy code officials under the Virginia Building Code Officials Association with a stated aim of boosting efficiency for new homes. But their influence is nowhere near enough to influence code updates, many stakeholders agree.

One of those local officials – Ellen Eggerton, an engineer in the land development office of Fairfax County – says few, if any, of her colleagues are responsible for pursuing code upgrades because they don’t have the time in their day jobs. She says she volunteers what time she can to track the process.

Grigsby and Eggerton encourage efficiency advocates and the public at large to offer their recommendations via a portal the state has online. How seriously those recommendations will be considered remains to be seen.

“There are a lot of voices in the room,” Framme acknowledged. “Sometimes it can be challenging to have yours stand out. The diversity of perspectives this governor has gotten on the board could portend a changing of perspective by one or two of those developers to get some movement on energy efficiency.”

Some homebuilders already ahead of the curve

One example of how new homes in Virginia waste energy can be found in the metric that measures leakage of conditioned air through heating and air-conditioning ducts. A provision in the 2015 model code established in 2012 states leakage should not be more than 4%. But Virginia allows it to be 6%.  And even that cannot be measured without actually testing for leakage. Grigsby said he has tested homes with duct leakage as low as 2% and as high as 28% percent.

The same goes for how tight – and thus efficient – a home’s “building envelope” is to guard against heat escaping in the winter and cool air wasted in the summer through leaks around doors, windows and throughout the attic. That is measured in part by a large fan inserted in a home’s front door to capture various leaks. Called a “blower door” test, it is part of the Home Energy Rating System (HERS) deployed and paid for by some builders and homeowners who want to understand exactly how efficient their homes are.

The code in Virginia only dictates a list builders must check off to see if their new-home features comply.

Tests for ducts and whole-house efficiency are available for the asking from certified HERS contractors, but they can cost upwards of $800 depending on a home’s size. Some certified energy auditors will provide that service free of charge if they’re hired to do work. As with some states, Virginia subsidizes home energy audits through utilities, but there too Virginia is lagging with very limited programs only open for short periods of time.

Some national homebuilders, including a few operating in multiple states including Virginia, are responding to what appears to be growing demand for more efficient homes, including Energy Star-certified homes, along with popular features such as “great rooms,” luxury kitchens and master-bathrooms. But they are appealing to buyers with high household incomes or cash buyers in the market for homes often priced above $800,000, for example, in suburban areas, where most new homes are being built. That leaves the bulk of middle- and low-income buyers and the state’s multi-family housing projects at the mercy of the state’s existing code.

Currently, there are five homebuilders in Virginia committed to constructing 100% Energy Star-certified homes. One non-profit – Viridiant.org – is gaining traction working with single- and multi-family homebuilders to distinguish their work based on various sustainability criteria under its original EarthCraft Virginia certification program.

According to a 2015 study published by the Virginia Center for Housing Research at Virginia Tech, EarthCraft certified multifamily projects outperform standard construction in Virginia by 30%. Residents in the studied units realized an average savings $648 per year.