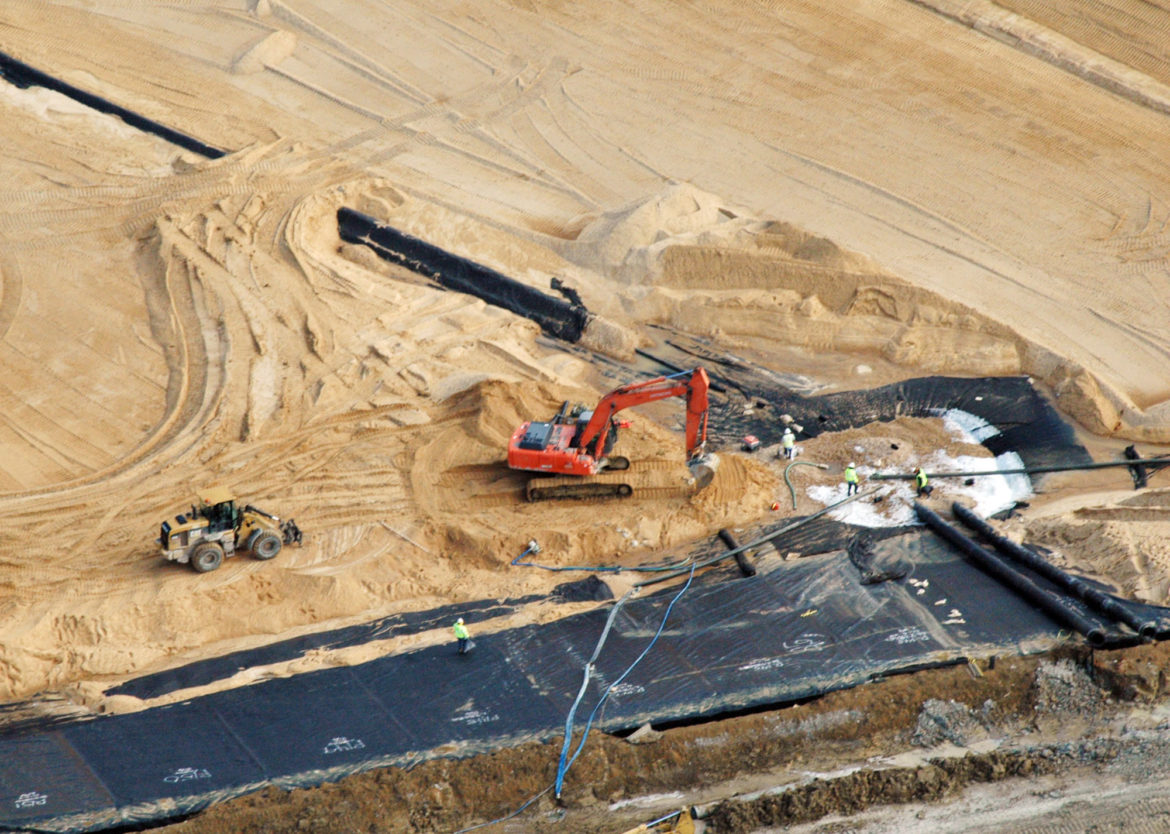 A plan to store ash at the Arrowhead Landfill near Uniontown, Alabama prompted heated local opposition and a $30 million lawsuit.

“The Southeast does not want to become the low-cost, low-environmental protection refuge for the nation’s coal ash,” says Frank Holleman, a senior attorney in the Chapel Hill, North Carolina office of the Southern Environmental Law Center.

When the EPA strengthened regulations on coal ash disposal in 2015, the agency intended to force the closure of ash ponds—and few legislators foresaw that power companies might choose to send their wet ash across state lines into communities that don’t want waste that can contain mercury, arsenic and other toxins.

Nor did the government anticipate private companies stepping in to fill the gaps and earn a profit by brokering deals, shipping the ash, or even developing landfills.

“We don’t want that same phenomenon, where non-utility owned landfills appear to be built for entrepreneurial reasons,” says Holleman, “by companies or individuals who decided they might make money storing ash that is not from any utility in the region.”

Several southeastern states are fighting coal ash disposal with an array of tighter laws and bills to either halt or strictly regulate imports from other states. Opposition by residents has derailed plans in some states. And recent or pending legislation in Georgia and South Carolina halts or strictly regulates the transformation of other states’ wet ash into dry, and its storage in landfills.

Those states are heeding Alabama’s cautionary tale: In 2008, Uniontown, Alabama, was caught unawares when a regional trash landfill became an unexpected coal ash dump. Residents fought the Arrowhead landfill and lost; Arrowhead owners then brought a $30 million lawsuit against protestors but finally withdrew it in February of this year. Four million tons of coal ash now fills the dump, much of it from the infamous Kingston, Tennessee coal ash spill in 2008.

On the Georgia coast, Wayne County signed a contract with Republic Services to take out-of-state coal ash at the Broadhurst landfill in Jesup. Under Georgia’s current laws, out-of-state utilities can ship ash to household waste landfills, many of which do not have proper linings.

Three bills have been proposed this year and a fourth is on the way next year. The bills have strong bipartisan support, but if they don’t get voted on in at least one legislative chamber before March 3 (the annual “crossover day” to the other legislative chamber) they will have to be introduced again in 2018.

That is likely, says Jen Hilburn, the Altamaha Riverkeeper, because when meetings were held on February 28 at the Capitol, “there was a heavy presence of industry lobbyists, and failure to move to the bill out of subcommittee for a vote. That may seal the death of these bills for the 2017 session.”

Two of the bills, HB 387 & HB 388, were introduced by Rep. Jeff Jones, a Republican from Brunswick. The bills add critical regulations for safe disposal and dewatering of the ash, discharge permits, monitoring of toxicants in the effluent, halting disposal of ash in unlined ponds, and lining of any future ponds. HB 388 adds critical requirements for the handling of toxic coal ash at household waste and commercial landfills.

Says Jones: “Wayne County had no legislation requiring them to notify the public when waste is going to be stored locally. We only found out about the plan and the magnitude of it when we discovered they were planning to bring in 100 train car loads a day. We’re changing that with our new legislation.”

The city of Brunswick is downstream of the aquifer that passes under the Broadhurst landfill, and a summer hearing at the historic courthouse was packed with concerned residents. The new bills require that any water drained off the wet ash be at least as clean as the gray water that comes out of a sewer treatment plant.

“Clean up the water before you discharge it,” says Jones, “and get that information on the books.”

Jones will put forth a third bill next year, he says, which will specify the reparations offered to a private property owner living in the shadow of a coal ash pond or power plant that seeps into private water.

That includes the option of paying for a new, very deep well for the owner from one of two aquifers: “In our part of Georgia, there are at least two main aquifers,” says Jones. “The Miocene and the Floridan, and they are very deep, at least 5,000 feet, and pristine top notch water.”

A fourth bill, S.B. 165, has been introduced by Senator William Ligon, a Republican in District 3, and it requires cradle-to-grave liability on any generator of the out-of-state coal ash—even long after it has been shipped away. It also requires a substantial bond from out-of-state utilities.

Hilburn thinks it may take 3-5 years of legislation to get proper coal ash regulations in place, however.

“Both Georgia Power and the Environmental Protection Department (EPD) have testified that they oppose components of the legislation and it does not give them the flexibility they require to make decisions on whether or what to monitor when dealing with the proper disposal and storage of coal ash.”

As a result, this week Rep. Jones may introduce substitute bills with fewer requirements, that may have a better chance of passing in this session. The main push this session is for 30 days public notice when a landfill decides to take coal ash.

Actions in other states

Last year in South Carolina, two Pickens County Republicans—Rep. Davey Hiott and Sen. Larry Martin—sponsored and endorsed successful legislation to require commercial landfills that store coal ash to meet Class 3 requirements (the same protections required for utility landfills) with safe liners. Martin says that he sponsored the bill after Pickens County—which had contracted in 2007 for a construction and debris landfill in Liberty, South Carolina, that requires only a Class 2 permit—was going to approve Raleigh-based MRR Southern’s, “variance to go to between 300-500,000 tons a year for coal ash.

“We don’t know where that ash was coming from and they would never tell us,” says Martin, “claiming proprietary reasons. They just said it was from out of state.”

The new law requires any utility, whether in the state or out, to dispose of offsite waste in a Class 3 landfill. “I shared with the Senate and House that this bill would protect the 60 other Class 2 landfills around the state,” says Martin, “any of which could have received coal ash under the previous regulations. I got everybody’s attention with that.” The bill has a 5-year sunset clause, at which point it will need to be reauthorized.

In February in Northampton County, North Carolina, VistaGreen, a private company, withdrew their plans to build a coal ash landfill on 804 acres after an outcry by local residents. But the larger battle is far from over for the Southeast. Private companies and entrepreneurs see coal ash shipment and storage as a potential cash cow that may offset declining profits in the coal sector and in the transport of coal. CSX Corporation, which traditionally transported coal on its railroads, saw sharp declines in coal transports in recent years, and has promoted the potential profit in hauling coal ash on those rail cars instead to Jesup, Georgia.

“The ash being produced in our region can be handled in our existing landfills,” says Holleman, “but we don’t want our space to be the refuge for coal ash from elsewhere. In many ways this is such a simple issue. This is industrial waste, and it’s pure common sense to store it safely, separated from our water sources. All the other debates are really about the political clout of those who have the coal ash.”

An earlier version of this story incorrectly stated that Duke Energy was sending coal ash to Wayne County, Georgia. The story has been updated.