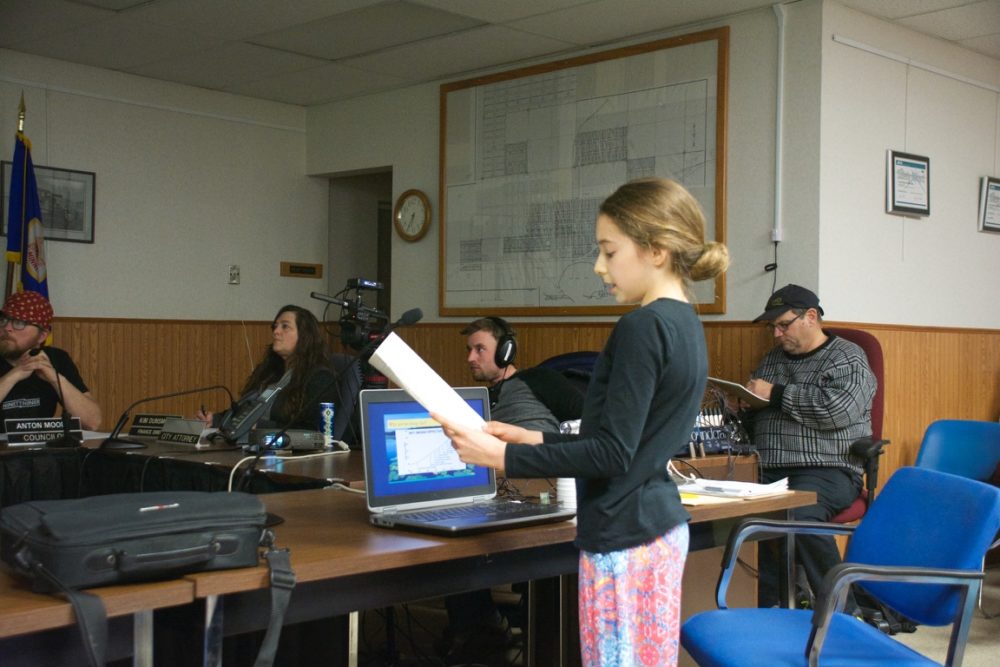 Last month 11-year-old Olya Wright and a handful of students convinced the Grand Marais city council to adopt a “climate inheritance resolution” that could lead to a reduction in greenhouse gas emissions in the tiny North Shore hamlet.

Wright is a member of Nordic Nature Group, a youth environmental group in Grand Marais, a city of slightly more than 1,300 residents that hugs the shoreline of Lake Superior north of Duluth.

A beacon for tourists and outdoors enthusiasts, Grand Marais became the second Minnesota city after St. Louis Park to pass a climate inheritance resolution initiated by students using a “report card” developed by the nonprofit iMatter.

“I was not overly nervous at first, but I got more nervous after seeing there was a ton of people watching me,” Wright said. “But I was excited to talk and it was fun to present and listen to others presenting.”

The council asked a few questions, she recalled, among them the issue of the county’s involvement in any changes. Grand Marais resides in sparsely populated Cook County, which has just a bit more than 5,000 residents.

Many of the town’s services are provided in conjunction with the county. Wright figures she and her group will present to the county next year.

The council members are also worried about whether they had to come up with a climate action plan immediately, but Wright assured them the resolution required only that the work begin within a three-month time frame.

The resolution calls for three things to happen — the creation of a climate action plan to reduce greenhouse gas emissions, to begin the aforementioned plan within three months of the resolution’s passage and to include “the youth voice” in future decisions involving the environment and climate change.

The five students — ages nine to 16 — who spoke to the council offered a petition signed by more than 100 residents, or a bit more than 7 percent of the city’s population, calling for the council to work to reduce carbon emissions and waste.

Part of the presentation offered the results of the report card that revealed the town received a D+ overall, despite its reputation as having a strong environmentally ethos.

Developed with help from climate scientist James Hansen, the report card offers an assessment in net-zero planning, renewable energy, waste, carbon removal and the inclusion of youth in future decisions involving the environment.

“There are some factors our city could improve upon,” the students concluded, while praising the city’s small community solar garden and focus on walkability. It’s not an easy report card, as other cities with more financial resources than Grand Marais have struggled to get higher than passing grades.

The student group brought to the city council was seen as having a positive impact by Mayor Jay Arrowsmith DeCoux.

“This group of young people made it very clear to us that the future can’t wait and that action for their future needed to be taken now,” he wrote in an email. “The City is viewing this as an investment in future cost mitigation and planning that we will have to undertake anyway when climate change begins to affect us more than it does now.”

Wright recalled that among the presenters were kids who are home-schooled or at public and charter schools. Although the Nordic Nature Group involves younger students in middle and grade schools, it works with a similar organization at the local high school on climate initiatives.

Chief iMatter mentor and executive director Larry Kraft points out that in addition to the two Minnesota cities, two more in Indiana have approved the climate inheritance resolution. They are Carmel, a suburb of Indianapolis, and Indianapolis itself.

The Trump administration is changing the landscape for environmental activism, but Kraft believes it hasn’t had an impact yet. Carmel passed the resolution even though it has a Republican-dominated city council, he pointed out.

The focus of iMatter has been “on local and grass roots activism,” he said. Having a Democratic administration in the White House did not initiate a much faster movement toward dealing with climate change, Kraft said, “so certainly the fact this administration seems more hostile to it is a factor. In some ways, it’s caused more activism at the local level.”

The Minneapolis suburb of St. Louis Park was the first in the country to pass an iMatter climate inheritance resolution last March. The city council is moving forward with two local organizations on a plan to reduce energy use in the future, Kraft said.

The city of more than 47,000 residents hired the clean energy nonprofit Great Plains Institute and the architecture firm LHB, Inc. to write the plan. The two groups presented their data findings to a city commission earlier this month. Several students attended it.

“The big part of the project so far has been collecting years’ worth of data,” said Jayne Stevenson, a senior at St. Louis Park High School. The next presentation, later this year, will outline where the city should invest resources in creating a cleaner environment.

Stevenson, the youth representative on the St. Louis Park Environment and Sustainability Commission, said the researchers could not get energy data on a per-building basis because of confidentiality issues.

Some of the students, however, agreed to contact school district administrators to gather data on energy use of individual schools. Stevenson is among those working with the district to get energy-use data.

“Utilities don’t like to share that granular data about customers but we do have aggregated data by sector,” said Abby Finis, senior planner with the Great Plains Institute.

Much of the information collected so far comes from the Regional Indicators Initiative, which tracks for 22 Minnesota communities their water, energy, waste, greenhouse gas emissions and travel, she said. One of those communities is St. Louis Park.

St. Louis Park has been ahead of the curve in energy planning, Finis noted. The city is among those participating in Xcel Energy’s Partners in Energy program and the Minnesota Local Government Project for Energy Planning (LogoPEP).

Still, the input of iMatter mattered. “What iMatter is doing and the impact it’s having in bringing new voices to city leaders is great to see,” Finis said.

The consultants say they want input from students after the draft of the plan and therefore will have it done this spring. That will be just in time for Stevenson, who is graduating.

She has been a member for years of Roots & Shoots, the high school’s student-run environmental group that is part of a global network started by the Jane Goodall Institute.

And wherever she goes to college, Stevenson plans to continue to keep an eye on St. Louis Park’s effort to create a cleaner city.