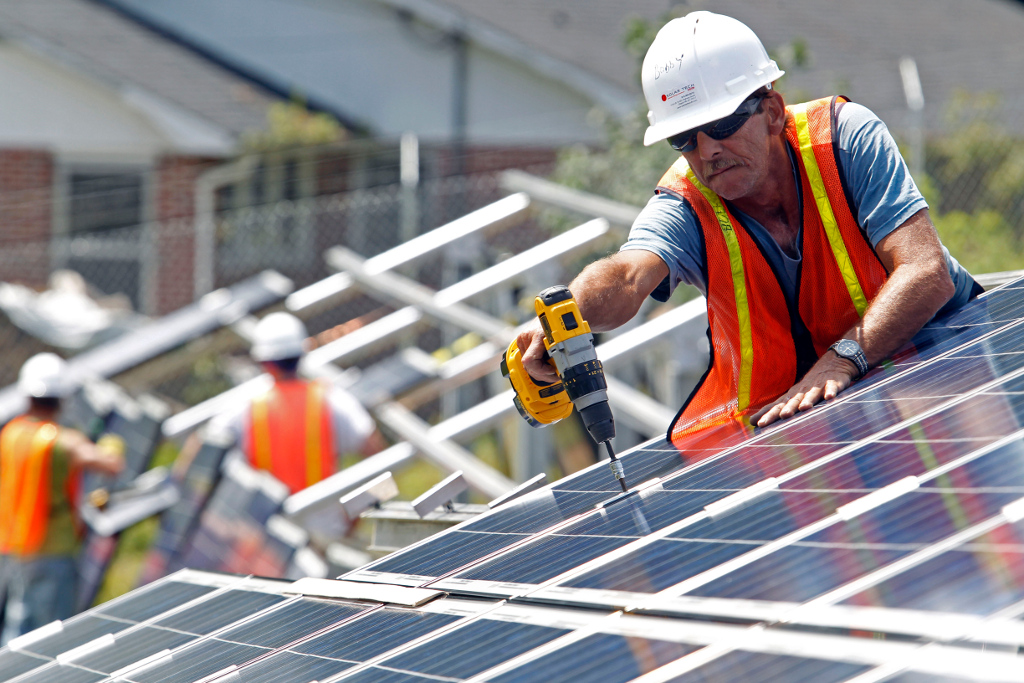 Ratepayers in the Carolinas could save nearly $10 billion if Duke Energy increased solar power sixfold, shuttered coal plants ahead of schedule, and abandoned goals for a new nuclear plant, a new report shows.

Clean energy advocates who commissioned the research from Daymark Energy Advisors say it’s a game-changer in the perennial debate over the utility’s long-range generation strategy.

Duke’s 15-year forecasts have drawn criticism in years past for their limited reliance on renewable energy, but the North Carolina Utilities Commission has always approved the plans with few changes, judging them the “least cost” option for ratepayers.

The Daymark report marks the first time advocates in North Carolina have demonstrated to this degree of specificity that more clean energy and less fossil fuel and nuclear power will be cheaper for its customers.

“We’ve done analyses in the past, crunching data in a defensible way,” said Gudrun Thompson with the Southern Environmental Law Center. “What makes this filing different is that we retained an expert consulting firm. They were able to show, with Duke’s own data, the money-saving potential of these cleaner energy resources.”

Formerly called La Capra Associates, Boston-based Daymark has worked for a range of clients across the energy sector, including the North Carolina Utilities Commission itself. The firm holds a license to a modeling program that some utilities use for long-term planning.

As an intervenor in the quasi-judicial proceeding over Duke’s plans, the Southern Environmental Law Center requested and obtained data from the utility on behalf of the Southern Alliance for Clean Energy, Sierra Club, and the Natural Resources Defense Council.

With its modeling program, Daymark used that data — including an hour-by-hour projection of future electricity needs and the life expectancy and performance of Duke’s existing fleet of power plants — to replicate, then manipulate, the mix of fuels chosen by the utility.

“Daymark found Duke’s process of preferred plan development to be somewhat arbitrary,” the report says. By eliminating what they called unnecessary constraints, the researchers produced a cheaper plan that they said was also greener.

For example, Daymark analysts said Duke’s decision to limit solar to 10 percent of its energy production was “premature.” Their study found the utility could produce about six times as much solar as it does today, instead of its current forecast of twice as much.

That extra solar, along with 1,185 megawatts of wind power and additional energy efficiency, would help Duke meet carbon reduction goals without building a long-sought nuclear facility near Gaffney, South Carolina, according to the report.

“Cost overruns, construction delays, regulation hurdles are a few of the risks to consider,” researchers said of the $11 billion Lee plant, which — though it’s not slated to be built for another decade — received approval from federal regulators late last year.

Daymark also found Duke could save customers money and cut carbon pollution by closing five coal-burning units at Mayo and Roxboro before 2031, rather than keeping them online until they are fully depreciated.

Finally, the study called for nearly 2,000 megawatts more natural gas capacity than Duke plans — but all in the form of high-efficiency combined cycle plants and not “combustion turbine” units that run only when electricity demand is at its height.

While rapidly declining costs of clean energy may have played some role in Daymark’s findings, advocates didn’t find them that surprising.

“I think we likely would have seen similar results had we commissioned a similar analysis five or even 10 years ago,” said Thompson of the Southern Environmental Law Center. “Energy efficiency has been the least-cost resource for a very long time.”

‘Do you have the best vision for the future?’

Though Duke’s projections, reviewed and approved by regulators annually, aren’t binding, experts say they set the stage for future discussions, such as whether specific new plants should be built and how much solar companies will be paid for their power.

“If these issues aren’t addressed on the front end, commissioners and others are going to end up addressing them on the back end,” Thompson said.

Randy Wheeless, a spokesman for Duke Energy, said he hasn’t yet examined the Daymark study, but defended his company’s forecast. “Directionally we’re doing what’s right to serve customers in North Carolina,” he said.

He also stressed that the nuclear plant and other aspects of the blueprint weren’t set in stone. “There’s been no decision on the Lee [nuclear] plant. There’s been no definitive announcement from the company that we are going to build that.”

Duke has already demonstrated a willingness to shutter coal plants ahead of schedule, and would continue “to look for better, economical ways to meet demand,” Wheeless said.

Critics acknowledge that Duke has improved on its plans for solar, energy efficiency and coal retirements in the past. But they say the forecast matters, in part because the company is already spending money on it.

“How much are they spending per year on studying the Lee nuclear project and moving it through the licensing process,” asked Wilson, “compared to how much they’re spending on energy efficiency programs?”

“We have given them credit for being green to a certain extent,” he said. “But that’s not the metric. The metric is ‘do you have the best plan? Do you have the best vision for the future?’ What this Daymark study shows is they do not.”

Nine advocacy groups and businesses have intervened in Duke’s planning process, allowing the submission of technical comments; none of the commenters so far have been positive.

More than 3,000 people have signed on to public comments calling for more wind, solar and efficiency. Over 30 testified at a recent public hearing to object to the plans in person.

“Duke is doubling down on fossil fuels rather than investing in low-cost wind and solar,” said Elizabeth Adams of Cary, who said she had solar panels on her home. “I’m asking Duke Energy to change their plan, to go 100 percent renewable energy and energy efficiency.”

“This is a very disappointing plan,” said Kim Alexander of Apex, another solar panel owner.

“I’m especially concerned about coal ash, air pollution and global warming,” said Rosemary Lee of Raleigh. “The plan doesn’t do enough to protect our health and I’d like to see it revised and improved.”

The commission appears accustomed to the message as well as some of its messengers.

After one popular speech from 13-year old Colson Combs of Raleigh, Chairman Ed Finley gently chided the room for its burst of applause. “Please don’t clap. If you want to twinkle, we’ll allow that. Support, twinkle,” he said, demonstrating the shimmy of fingertips that’s a recognized sign of agreement in activist circles.

“Nice to see you again,” Finley told more than one speaker in the overwhelmingly anti-Duke crowd.

As with testimony from the public, technical remarks tend to follow a familiar pattern. The clean energy groups intervening this year have called for increased energy efficiency and clean energy before, and many have questioned Duke’s predictions of future electricity demand.

Such pleadings haven’t always been completely without effect. In 2013, for example, the commission approved the long-range strategy before it, but did tell Duke that in its subsequent plans it “should consider additional resource scenarios that include larger amounts of renewable energy resources.”

Advocates think more dramatic action is warranted this year from the commission, which expects to approve or amend the plans in the coming months.

“We think there’s enough there to require Duke to go back and correct the flaws in the [plan],” said Southern Environmental Law Center’s Thompson.

“They are some really legitimate issues that have been raised here,” said Wilson of Southern Alliance for Clean Energy. “If the company doesn’t move quickly to address them, [it’s] going to continue to leave billions of dollars of potential savings on the table.”