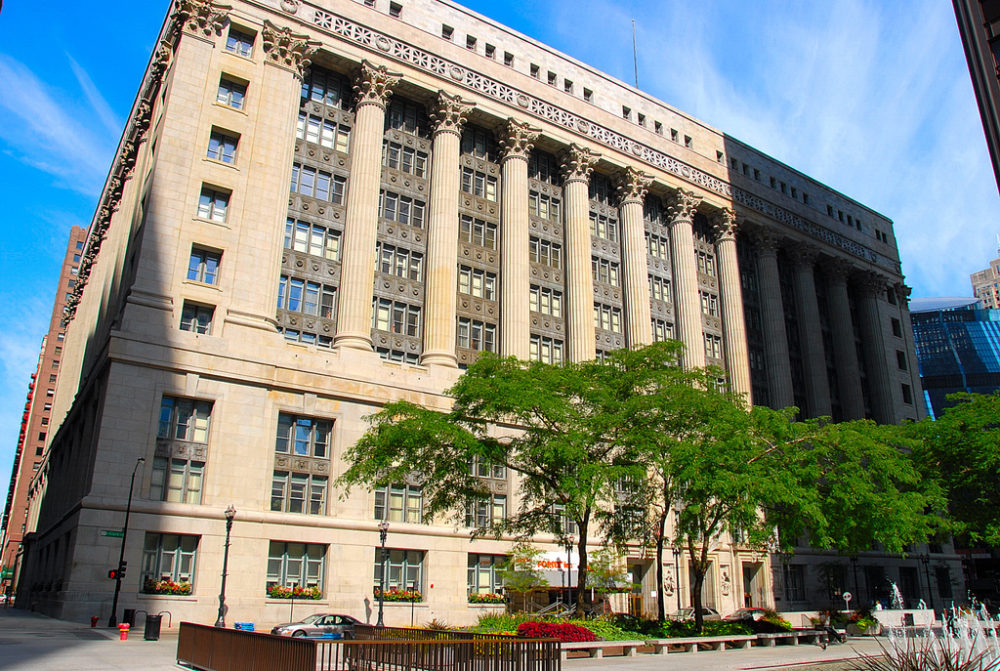 Large buildings throughout Chicago are getting more efficient, trimming energy costs and reducing emissions, according to recently released data from the city.

However, the early data also suggest several major properties are still struggling to improve their energy performance as measured by the U.S. Environmental Protection Agency’s Energy Star program. In some cases, a change in a building’s publicly reported energy performance data appears to be the result of accounting variability or errors as opposed to an actual change in energy performance.

Chicago’s own City Hall saw its Energy Star rating decline more than any other building that reported data between 2014 and 2015, according to the city’s record-keeping. Officials say this decline is not the result of a change in energy usage, but instead how it measured energy use.

The energy-usage data are the result of a 2013 city ordinance that requires existing commercial, institutional and residential buildings larger than 50,000 square feet to collect and submit energy performance data to city officials. Taken together, those buildings represent just 1 percent of all Chicago buildings, but 20 percent of the citywide building energy use.

Major cities across the U.S. are leveraging newly available energy data on the power grid to identify and reduce inefficiencies in residential and commercial buildings. In 2015, buildings in those two sectors alone made up 40 percent of total U.S. energy consumption, according to the U.S. Energy Information Administration. Nineteen cities across the U.S. have implemented an energy benchmarking program, according to the Institute for Market Transformation, a Washington D.C.-based nonprofit that promotes green building initiatives.

Because buildings are phased into the Chicago Energy Benchmarking program over time, two-year trend data exists for only about 1,000 buildings — but the limited, early results suggest progress is being made. Between 2014 and 2015, those buildings cut their weather-adjusted energy use by 1.9 percent for a cost savings of $6.2 million per year, and they reduced greenhouse-gas emissions by 189,550 tons, according to the 2016 Chicago Energy Benchmarking Report released in January.

These properties also mostly saw an increase in their Energy Star score, a metric developed by the U.S. EPA to rate buildings’ energy efficiency compared to others of similar type and purpose. On a scale of 1 to 100 — with 100 being the most efficient — Chicago properties reporting across two years earned a median score of 51 in 2014. One year later, that median score rose to 55.

It’s difficult to determine what exactly caused the improved energy performance, and it’s too early to tell if this is simply a short-term blip or the result of a larger trend toward more efficient building use.

Still, analysts say even just beginning to process this kind of data is a first step toward painting a clear picture of efficiency challenges and opportunities. And the early, self-reported results tentatively support the thesis that underpins benchmarking projects — namely that information, awareness and transparency surrounding energy use can nudge consumers toward more efficient behavior.

“It’s getting information back to the people who own and operate the building so they can make better decisions and possibly take action,” says Amy Jewel, an advisor to the city on building efficiency via the City Energy Project, a joint initiative of the Institute for Market Transformation and the Natural Resources Defense Council.

The hope is also that energy benchmarking can create some friendly competition. The city is authorized to make a building’s energy-use data publicly available beginning in the building’s second year of compliance with the ordinance. It makes the results available to property owners, occupants and the general public on the Chicago’s Data Portal and on a map made by the City Energy Project.

A city Department of Fleet and Facility Management spokesperson said the change involves natural gas usage for City Hall and the natural gas used for steam generation in the nearly identical Cook County Building. The two buildings are joined as one.

In 2015, the addition of the natural gas usage for the county building caused City Hall’s score to drop from 76 the year before to 36. The county building’s Energy Star rating dropped one point from 53 in 2014 to 52 in 2015, according to the data.

The data portal also erroneously lists 1870 as the year City Hall was built. The city confirmed that the building, located at 121 N. LaSalle St., was completed in 1911. Buildings listed in the database as being built between 1910 and 1920 averaged an Energy Star score of 68 in 2015, almost double City Hall’s 2015 score.

In recent years, City Hall has installed new chillers, refurbished or replaced cooling towers, retrofitted its heating, ventilation and air conditioning system, and has begun to install more efficient lighting, according to the city.

Five of the 10 most-improved buildings between 2014 and 2015 were Chicago Public School facilities. The Little Village Lawndale High School Campus improved its Energy Star score by 31 points — the most of any property with publicly available data in both 2014 and 2015.

“During original benchmarking data entry, gross square footage of only one building was entered,” Steve Grbavac, facility engineer at the University of Chicago, explains in an email. (The hospital actually consists of two buildings.) This made the hospital’s energy consumption appear large compared to its erroneously reported small square footage in the 2014 data. “I wish I could report we did something sustainable to improve our score but the truth is that all we did is add the square footage of the other building and correct the original mistake.”

In a separate news release, University of Chicago Medicine says that in its fiscal year 2016 it replaced 78 failed steam traps, which regulate steam condensate for sterilizing equipment, in 15 buildings including Comer. The medical campus says it will continue efficiency upgrades in fiscal year 2017 that will yield an estimated 1.7 million kilowatt-hours per year in electricity savings and a total cost savings of over $600,000 per year beginning in fiscal year 2018.

The benchmarking ordinance requires that every three years — starting with the first year a building complies with the ordinance — buildings have their data verified by an individual with licensing or training recognized by the city. Over time, as building owners become more familiar with the process, the margin of error should decrease and trend lines should become more clear.

Many buildings across Chicago have taken advanced measures to curb their energy consumption, leaning on communications and analytics systems enabled by a smarter, more connected power system. Efficiency improvements are planned, underway or completed in over 23,000 homes and 132 large buildings as part of the City’s Retrofit Chicago initiative, in which buildings commit to reduce energy use by at least 20 percent within five years of joining the program.

Taken together, Chicago reduced its carbon emissions by 7 percent between 2010 and 2015, according to a separate analysis released by the city in January. That reduction came even as Chicago’s population grew by 25,000 people and its economy rose by 12 percent. The emissions associated with the city’s residential, commercial and institutional buildings alone dropped by 10 percent over the five-year span — the largest reduction of any sector. The City attributes the decline to both a reduction in electricity consumption as well as a switch to less carbon-intensive fuels.

“Chicago will not wait on the new administration to make up their minds as to whether or not climate change is real and if we have a responsibility to combat it,” Mayor Rahm Emanuel said in a press release. “Whether it’s energy efficiency in buildings, moving beyond the use of coal, or reducing our waste, this report is the clearest example yet of the leading role major cities can play in the fight against climate change while growing the economy.”

The 2017 Chicago Energy Benchmarking Report also highlights Wilbur Wright College, which uses real-time systems for energy monitoring and building automation. It has also added insulation and upgraded lighting in its library. Between fiscal years 2014 and 2015, the college cut natural gas and electricity use annually by 17 percent and 19 percent respectively, according to the report.

The Monadnock Building, which was the world’s largest office building when it was completed in 1893, manages a near-perfect Energy Star score of 98. Over the past decade, the stately brick skyscraper has cut its electric and gas consumption by about one-third through improved steam-system automation, weatherstripping and gradual installation of sensor-controlled lighting, according to Claudia Daly, a Monadnock representative.

Like other old buildings, the Monadnock also benefits from some surprisingly low-tech energy-saving designs.