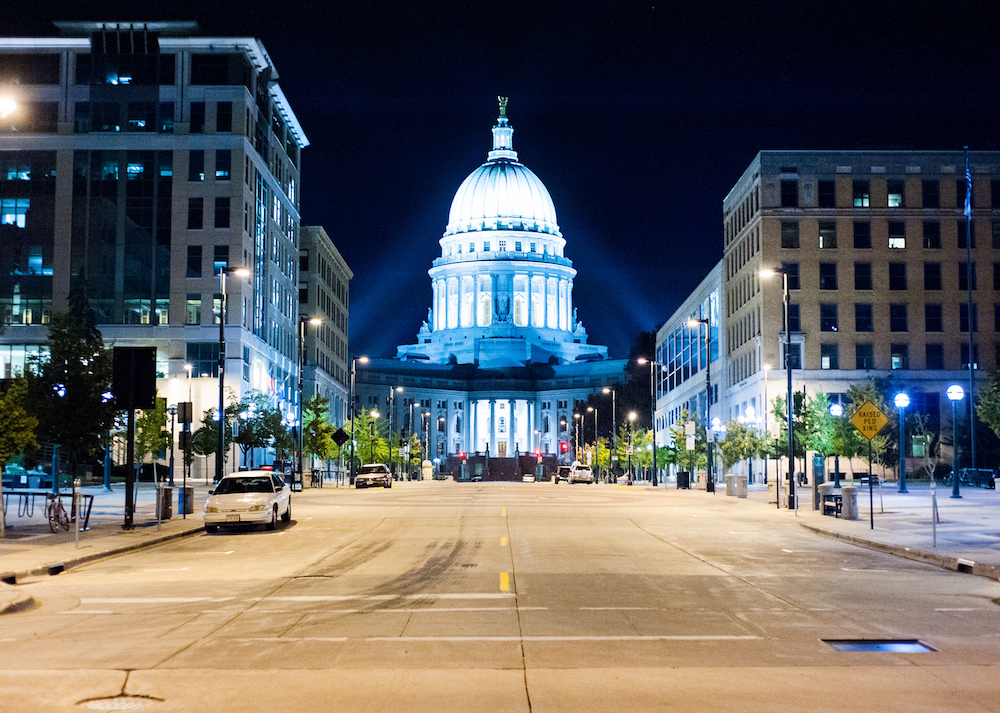 Madison, Wisconsin committed to getting 100 percent of its energy from clean, renewable sources in a resolution passed unanimously by the City Council on Tuesday. It became the 24th city to make such a promise, according to a tally by the Sierra Club, which has a “Ready for 100” nationwide campaign.

Madison’s resolution sets a high bar in a state that gets most of its electricity from coal and where, as in most places, natural gas is almost exclusively used for heating during harsh winters.

Madison’s resolution calls for the entire city to get all of its power from clean renewable sources, starting with city operations. There is no target date specified, but the resolution mandates that a plan to get the city government’s operations to all-renewable must be developed by January 2018, including specific dates and benchmarks. The resolution calls this process a “budgetary and managerial priority.”

“The community (citywide) goal hopefully will be realistic, we’ve had our partners at the table and will continue to do so,” said Zach Wood, a City Council member who spearheaded the resolution. “The reason we have two separate goals is we want the city to be a leader — not just tell our neighbors what to do but walk the walk, and make sure we get there first.”

The resolution allocates up to $250,000 for a planning process wherein the city will engage a consultant to develop different options for moving forward. The money comes from $750,000 for sustainability improvements already enshrined in the 2017 budget.

“That’s not the easy part but it’s the cheap part,” said Wood. The city will need to continue allocating money in future years to carry out its own energy transition and provide support for private citizens and businesses.

While the resolution is largely non-binding, it mandates the plan be developed and regular reports on progress to the City Council. The 100 percent goal will be written into a revised version of the city’s sustainability plan, and will be overseen by the Sustainable Madison Committee, made up of 18 citizens appointed by the mayor.

The plan due in January 2018 “will give people a sense (of) what the building blocks are and how they might arrange them,” said Sustainable Madison Committee chair Raj Shukla. “We’ll give policymakers as much flexibility as possible, and a very clear understanding of what the tradeoffs are. There are real limitations on what a city can do outside its operations. But what it can do is use its bully pulpit, and encourage businesses, utilities and other entities to follow suit.”

The city’s electricity is provided primarily by the utility Madison Gas and Electric, with the utility Alliant also serving some customers. MG&E’s portfolio includes about 13 percent renewable energy, 48 percent coal-fired power, 9 percent gas and oil and 30 percent purchased from elsewhere. Advocates and city leaders note that MG&E will be the key player in determining how much of the city’s power comes from renewables.

MG&E officially endorsed the resolution, and has its own Energy Framework 2030 that calls for 30 percent renewables by 2030. MG&E recently announced plans for its largest wind farm to date, a 66-megawatt installation near Saratoga, Iowa.

New MG&E CEO Jeff Keebler was quoted in Wisconsin State Journal saying he could not commit to 100 percent renewables.

But MG&E spokesperson Dana Brueck said the company is committed to working with the city to implement the spirit of the resolution. Currently, the company’s Green Power Tomorrow program lets customers buy electricity specifically from wind. A pilot program launched last year letting customers purchase solar power is sold out but will be expanded, Brueck said.

‘Like the city, we’re looking to increase our use of renewable resources and to reduce our reliance on coal.’ — MG&E

“We have ambitious renewable energy and carbon reduction goals,” Brueck said. “If we can go further faster, we will. Like the city, we’re looking to increase our use of renewable resources and to reduce our reliance on coal.”

Advocates including the citizen group RePower Madison have in the past clashed with MG&E over policies that they say are hostile to solar energy, including increases in the fixed charges it levies on all customers regardless of how much energy they consume from the grid.

RePower Madison organizer Mitch Brey praised the utility for its involvement in the resolution process, and called on the company to step up its commitment to renewables.

Brey added that Renewable Energy Credits or similar credits purchased from elsewhere should not be used to meet the 100 percent renewable goal.

“I don’t think it would be very satisfying for anyone if we met this goal by buying credits,” Brey said.

The city government and individual businesses, industries and homeowners can increase the city’s reliance on renewable energy by building solar installations or small wind turbines “behind the meter” on their own property, in some cases owned by third parties through Power Purchase Agreements.

The utility’s rate policies help determine how feasible it is for customers to install solar, with fixed charges, interconnection requirements and other factors playing a major role. In Wisconsin and across the country, renewable advocates note that technology and economic forces are making solar increasingly attractive.

“I think the biggest drivers are things out of our control — the price of renewables is dropping dramatically, the price of energy storage is dropping drastically, we’re seeing price parity,” said Shukla. “That’s the kind of thing that will kick this into high gear. We want to just start the ball rolling.”

Madison residents have voiced overwhelming support for the resolution and renewable energy in general, with crowds attending multiple hearings about the proposed resolution and testifying in its favor.

“We’ve been working hard since last summer to make the public aware of every entry point for participation in the democratic process,” said Elizabeth Katt Reinders, a Madison-based senior organizer for the Sierra Club’s Beyond Coal campaign. “We’ve been thrilled to see what a huge response there has been. That’s something we’re really proud of.”

A Sierra Club press release notes that on the same day the resolution was passed by Madison, with its famously progressive politics, the town of Abita Springs, Louisiana passed a similar measure. Abita Springs voters favored Donald Trump in the presidential election.

“Politics has nothing to do with it for me,” said Abita Springs Mayor Greg Lemons in a statement. “Clean energy just makes good economic sense. By establishing a 100 percent renewable energy goal, we have an opportunity to use solar power that we can control in our community, for our community.”

“You’ve seen other cities set really aggressive goals, you kind of need those to push the envelope and bring folks along,” said Kathy Kuntz, executive director of Cool Choices, a Madison nonprofit that uses a gaming platform to help businesses improve their sustainability. “If we can show that as a community Madison thrives while we achieve this objective, that becomes an important example for others.”

Gas, vehicles and other major challenges

Heating homes, businesses and public institutions with clean, renewable energy will be a serious challenge for Madison. Electric heating is typically much less efficient than natural gas, and to be “clean” the electricity would need to come from renewable sources.

Brey noted that biogas from manure biodigesters and landfill gas collection systems could theoretically be used for heating, as could geothermal energy, all sources that would be considered renewable. Shukla said those options haven’t been discussed as realistic possibilities thus far. He said increasing buildings’ energy efficiency — so that less gas is needed for heating — will be the first step on the heating front.

On the transportation side, Shukla said the city will look to electrify its own vehicle fleet, with the power provided by the sun or wind.

Brey said that plans for citywide transformation should be included in the planning process from the start, even though the city’s immediate goals have to do with its own operations.

“It shouldn’t be done in a silo, getting city operations to 100 percent and then later figuring out how to do the community as a whole,” he said.

Proponents say they are committed for the long haul.

“This is the first step of many,” said Council member Wood. “Last night was great, we were extremely encouraged and excited, but we need to capture this excitement and keep it going when it comes time to put more money into this and realize our commitments. This is long, long term. We’ll need to invest in and focus on it every year, forever.”