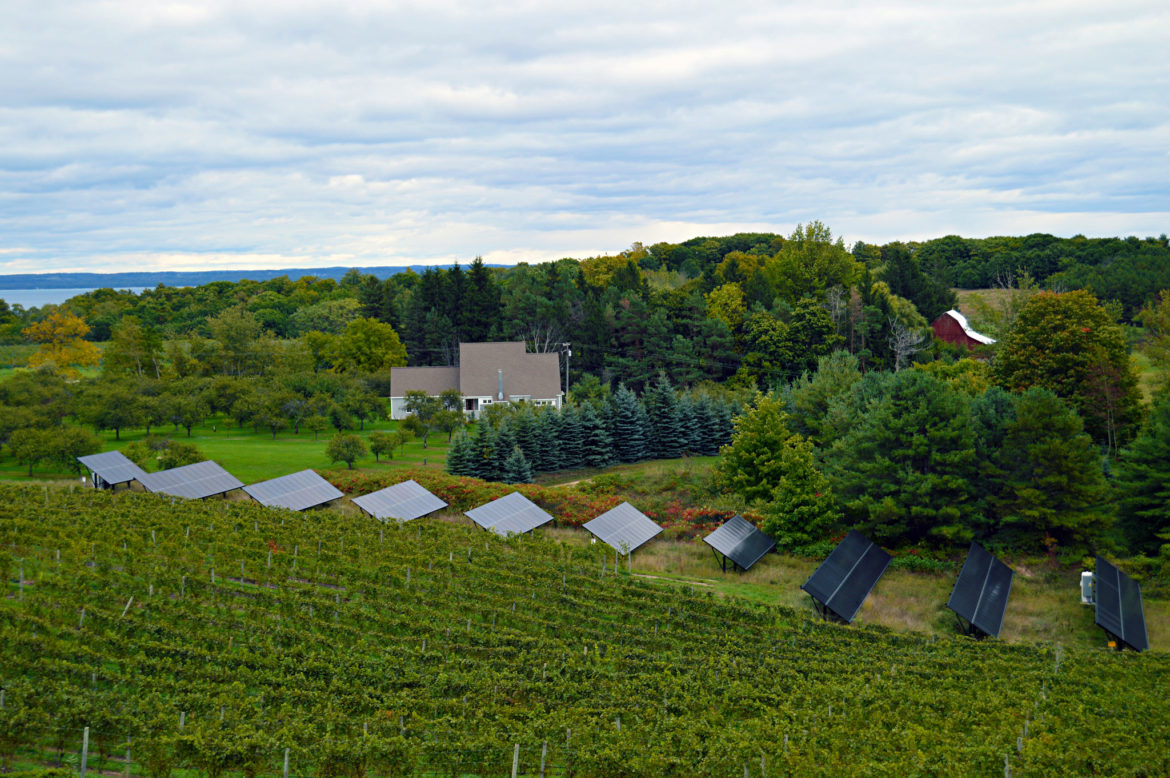 Solar panels at a winery near Traverse City, Michigan.

A two-year legislative process to reach compromise on wide-ranging energy bills in Michigan will now turn into a two-year implementation period as state officials, utilities and stakeholders comply with provisions in the new laws.

Earlier this month, the state unveiled a new website tracking the progress of various groups involved with changing the way utilities project future energy needs, how energy usage will be managed through efficiency and demand response and how utilities will procure more renewable energy to meet the increased standard of 15 percent by 2021.

And on Wednesday, the Michigan Public Service Commission formally kicked off the process for determining the cost of service around distributed generation. As other states grapple with how to charge ratepayers who generate their own solar power in lieu of net metering programs, state officials have convened a group with diverse interests to determine the “equitable cost of service for utility revenue requirements,” according to the law.

In roughly a year’s time, state regulators hope to be able to put a price on distributed generation, and answer the questions of whether solar generators are being subsidized by all other ratepayers for using the grid.

“There was a lot of stuff in the legislation that covered a lot of different topics,” said Mike Byrne, director of the external affairs division for the Michigan Agency for Energy. “As we went through and looked at the different tasks to accomplish, we wanted to make sure we’re being as open and transparent as possible in terms of processes it will take to implement the changes.”

Parsing out each issue in the bills, the state will track the progress of groups working on nine different sectors, including electric choice, integrated resource planning, distributed generation, energy efficiency and renewable energy. Work from those meetings will be posted online, as will opportunities for public comment.

Ariana Gonzalez, the Midwest energy policy analyst for the Natural Resources Defense Council, wrote this week that the group will be closely following state compliance with the laws.

“What does this mean to you? It means the vision for Michigan’s energy future is being crafted right before your eyes and which vision is chosen will affect your health, wealth, and jobs,” Gonzalez wrote.

While the legislation established a set of rolling deadlines for different issues, Byrne said the MPSC wasn’t mandated to organize it for the public.

For the fiscal year ending on September 30 this year, $1.95 million for 13 full-time positions was appropriated to the MPSC to implement provisions of the bills, while the Michigan Agency for Energy received $260,000 for two full-time positions.

“We thought putting the information together like this and giving people an opportunity to follow all of the activities taking place will make it easier for folks to see where we are on a given issue,” Byrne said.

Public Acts 341 and 342, which passed with bipartisan support at the end of the legislature’s lame-duck session in December, were the culmination of two years’ worth of work to update the state’s energy laws. The last overhaul took place in 2008 when the state created renewable energy and efficiency standards that were met by utilities and leveled off in 2015.

What does distributed generation cost?

During the legislative process, some leading Republicans sought to restructure, or eliminate, the state’s net metering program, a contentious move that riled solar advocates. At times, the fate of the program looked uncertain as major utilities backed plans to dismantle it, offering compensation to customers who generate excess electricity for the grid at wholesale levels rather than retail. That’s a fight playing out across the country, and most recently in Indiana.

MPSC staff said the net metering program will effectively continue on a “business as usual” basis until distributed generation plans are approved by the MPSC, the first of which likely won’t take effect until April 2019. Current net metering customers will also be grandfathered into the program for 10 years after they signed up.

The end “may result in a distributed generation program with a tariff mechanism different from net metering,” the MPSC’s Jesse Harlow said during Wednesday’s meeting.

Julie Baldwin, renewable energy manager with the MPSC, said staff will study several tariffs for determining distributed generation’s cost of service, including buy-all sell-all models and a value of solar rate. Baldwin also said MPSC staff is interested in an “inflow-outflow” mechanism where solar customers are charged a retail rate for electricity they use from the grid (inflow) and are credited based on the “necessary cost of service” for excess electricity sent back to the grid (outflow).

Baldwin said the MPSC will not be narrowly looking at whether distributed generation customers are being subsidized by other ratepayers for using the grid.

“We want to approach it a little differently,” she said. “In order to move forward and satisfy the question of whether it is a subsidy, we have to do the cost-of-service analysis. It’s really important to get a good foundation for having a rate that can grow and be sustainable going forward. We’re not pre-judging, and we don’t know how it’s going to turn out. On the face of it, it’s going to be better for solar than some people think.”