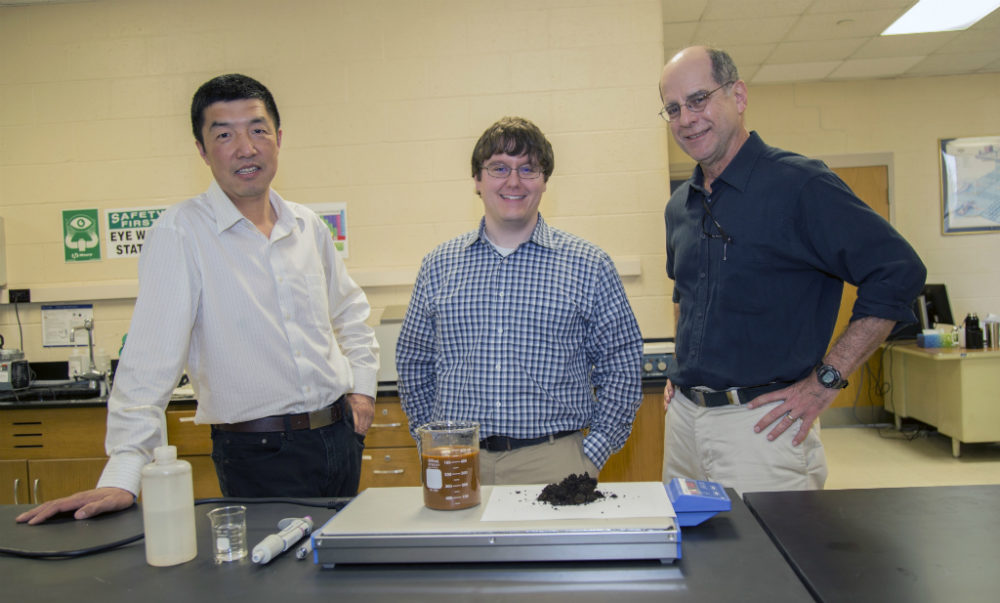 Researchers at state universities in the Southeast are closing in on whether one of the region’s biggest liabilities – coal mine waste – might become a valuable asset by supplying rare earth elements needed for clean energy and other applications.

The answer lies in whether the University of Kentucky, Virginia Tech and West Virginia University, working with federal energy laboratories, a few coal companies and large manufacturers, can identify ways and locations to economically extract and process rare earth elements from the waste streams left over from mining coal throughout Appalachia and Western Kentucky.

“We’re working with members of the coal industry and state agencies that are engaged in treating AMD (acid mine drainage) solids to sample their waste streams, said Paul Ziemkiewicz, the lead researcher who heads the West Virginia University’s (WVU) research with colleagues Xingbo Liu and Aaron Noble at its Water Research Institute in Morgantown.

The collaborative effort faces its first key milestone this summer when it completes the first of two phases under $7 million of federal funding, said Roe-Hoan Yoon, the lead researcher at Virginia Tech in Blacksburg. The first $1 million is to produce a report summarizing their research findings to date.

Phase two, budgeted at $6 million and to be competitively bid, is to design a mobile pilot processing plant that could move among several sites, may be at risk if Congress does not pass a budget for the current or next fiscal year, which begins October 1. Yoon estimated the cost to build such a pilot facility at about $20 million.

“When you look at the list of what (REEs) we import, where we import it from, and what it is used for, it quickly becomes clear that we have a very real problem on our hands,” said Sen. Lisa Murkowski, chair of the Senate’s Energy and Natural Resources Committee hearing Tuesday. “If we let this go unchecked, we will come to a day of reckoning … when we simply cannot acquire a mineral, or when the market for a mineral changes so dramatically, that entire industries are affected.”

Ziemkiewicz said “the coal industry is very excited about this. We’re all optimistic that the (Trump) administration will see the job-creating opportunities.”

“You’ve got good access to operating sites,” Ziemkiewicz added. “They have an established workforce that’s ready to jump in and make some money. They have the needed utilities and everything you need to run a coal mine. You can gather the AMD precipitates and haul them off to a refinery. This could start tomorrow.”

Ziemkiewicz said they have identified 120 prospective sites throughout northern and central West Virginia and parts of Eastern and Western Kentucky where processing plants could be constructed at a relatively low cost.

Prospective mine sites in West Virginia are in Monongalia and Preston counties along the Pennsylvania border and in Kanawha County, near Charleston, Ziemkiewicz said.

Rick Honaker, who chairs the College of Engineering at the University of Kentucky in Lexington, said sites he and his team have identified include an Arch Coal mine in Taylor County, West Virginia and an Alliance Resource Partners mine in Webster County in Western Kentucky.

Experts says about 95% of the world’s rare earth elements are being produced in China. If that country’s leaders decided to limit its exports, several additional industries with as much at stake could find the supply limited or the price inflated beyond their ability to supply the products or systems at costs they can afford or justify.

There are 17 rare earth elements, or REEs; some are more critical than others. Here is a sampling of which REEs are needed for energy equipment suppliers.

Basins containing coal mine sludge and other mining waste streams are spread throughout Appalachia and pose significant risks to regional water quality. The Clean Water Act requires miners to neutralize he acidity of and remove metals from mine waste. But with many coal mines shut down and some operators out of business, some of those requirements aren’t being met.

A future revenue stream resulting from capturing rare earth elements could supply funds to address that challenge, these researchers said, adding that each state and the counties with participating extraction operations could see new local tax revenues to sustain declining coal communities.

Under the direction of the U.S. Dept. of Energy (DOE), there are currently nine corporations such as GE and United Technologies participating in related research efforts. All the participants are working with five of DOE’s national laboratories. The work is coordinated by the National Energy Technology Lab, also in Morgantown, West Virginia.

At DOE’s Ames Laboratory at Iowa State University, Alex King heads its Critical Materials Institute, which is also conducting research. He estimated that the collaborative research thus far has led to “60 substantial inventions and 20 patent applications” for extracting REE’s. He said a few of the patents have been issued and licensed to corporations.

Virginia Tech’s Yoon secured enough capital from interested investors to launch a company in Richmond to pursue what he believes is a scalable separation and recovery technology designed to clean and dewater coal. If successful, such a process could significantly reduce the raw material cost for rare earth minerals processors.

A severe shortage of certain rare earth elements could begin to affect China’s supply chain by 2024, according to Virginia Tech’s Yoon. Australia, India and Russia reportedly have small deposits of rare earth elements but their governments and industries use everything they can extract.

The economic viability of any process the researchers develop will likely depend on the degree to which the federal government decides it needs to ensure a reliable supply for affected U.S. industries. If China were to develop more of its supply and commit to meeting the growing global demand, any sense of urgency might fade away.

Also, the projected prices for specific REEs which vary widely could influence interest from corporations. Neither of the lead researchers would venture a guess about a possible tipping point for any of the 17 REEs.

Concerns about rare earth elements drew a lot of attention from the federal government after the only, and very limited, supplier of rare earth elements in the U.S. – Molycorp – filed for bankruptcy in June 2015. The company said its Mountain Pass mine in Southern California could no longer compete with China.
At one point under the direction of then-DOE Secretary Steven Chu in 2012, the federal government contemplated spending up to $120 million for five years on R&D efforts.

Whether the current Energy Secretary, Rick Perry, considers this a priority remains to be seen. President Trump was widely heralded, and challenged, during the campaign for promising to rescue the coal industry. While few, if any, political observers and coal industry analysts believe he can deliver, Yoon said, “this is the only way he can keep that promise.”