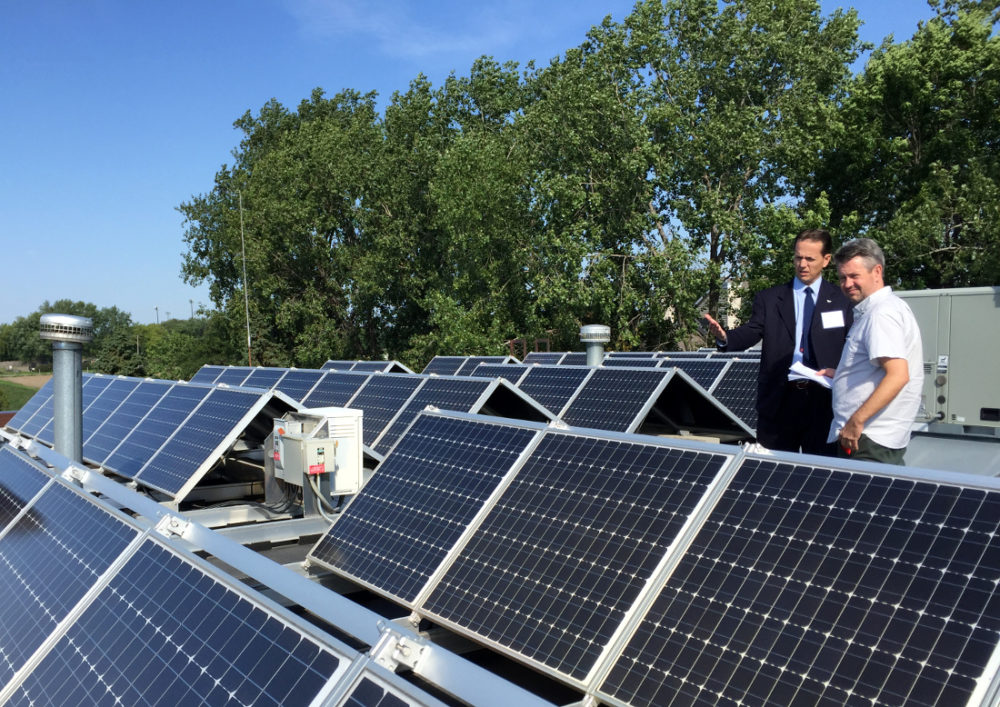 The nation’s first ever attempt to have municipal governments collectively buy power from community solar gardens was a modest success, according to a new report.

While municipalities in other parts of the country have come together to buy rooftop solar, none had ever tried it to capture cost savings in the nascent community solar marketplace, said Trevor Drake, project manager at the Great Plains Institute.

Minnesota has one of the country’s largest and best developed community solar markets, with more than 100 MW expected to go live this year. The cities involved in the “Governmental Solar Garden Subscriber Collaborative” are expected to contract for about 33 MW, according to Drake.

While the amount of power purchased through the program is significant — it’s double the state’s solar capacity prior to 2016 — the figure was did not quite exceed expectations for a variety of reasons, said Drake.

It was far less than the 180 MW the collaborative’s 31 government-related entities had originally suggested they would be willing to purchase when the effort began in 2015. The collaborative received bids to offer 70 MW before members contracted for about half that.

On the other hand, every community which signed a 25-year contract with a community solar developer is going to save money over the long run, sometimes hundreds of thousands of dollars in in some cases more than $1 million.

“All opportunities provided a net positive in savings over the term of the contract,” he said, ranging on the higher end from $352,000 to nearly $1.5 million.

The feedback has been positive. The collaborative “was really hard and really rewarding,” said Jason Willett, finance director for the council’s environmental services. “I’ve been called by people around the country asking about competitive multi government procurement for community solar gardens and asking how we did it.”

Willett and the Metropolitan Council, a regional policy and planning organization, negotiated with solar developers on behalf of the group. The agency had a great deal of experience with procuring solar energy, including placing panels next to wastewater plants.

Peter Lindstrom, mayor of the St. Paul suburb of Falcon Heights, participated in the collaborative and saw his city save around $1,000 a year on energy costs. (Lindstrom also works as the local government outreach coordinator for the Clean Energy Resource Teams, a statewide partnership which helped publish the report.)

The city has a 40 kW solar array on its city hall and decided to add to its portfolio by purchasing six percent of one megawatt of solar from a developer through the collaborative.

“It’s a relatively small annual savings,” he said. “but we wanted to encourage solar development in the state and we thought this was a good thing.”

As a mayor, he said it was the “best collaborative” he had ever been part of, considering how many governments participated in a “relatively new concept of community solar gardens. It went very smoothly. It reminds me of the old proverb ‘if you want to go fast go alone, if you want to go far, go together.’”

Still, the total amount purchased remained a disappointment. “It’s less than what we thought we could get,” Drake said. “It’s less than what everyone asked for upfront, but the other way to look at it is at the time we started there was 33 MW of installed solar across the state, so it’s a large number compared to what had been installed.”

Drake said the idea of the collaborative was four-fold: To gain quicker entry to the solar market, to attract better subscription pricing with larger purchases; to reduce staff time and to save on electric bills.

What happened between when the program started in 2015 and its end last year led to fewer-than-expected subscriptions attributable to a several factors.

Secondly, the federal investment tax credit looked like it was going to end, adding confusion to the market. Third, businesses in the eastern metro area, including St. Paul, attracted few offers from developers and therefore little competition, Drake said.

On the west side, anchored by Minneapolis, the offers were aplenty. “There were a lot of developers in the west metro, not as many in the east metro, so entities there could say yes to the best subscription,” he explained. “In the east metro a government might have had one subscription option.”

Part of the issue stemmed from a requirement in the state’s community solar garden law that subscribers either buy from a garden in their county or an adjacent county, Drake said.

Hennepin County, home to Minneapolis, has solar gardens and borders several counties with active markets, he said. Ramsey, where St. Paul is located, saw fewer opportunities during the collaborative because fewer gardens exist in border counties, he said.

Finally, several developers “didn’t got their pricing as competitive as we wanted,” Drake noted, and left government officials wondering where the financial advantage was to subscribing to a garden.

For his part, Willett said the project took an enormous amount of staff time because of its complexity. A draft subscription model for buying solar, for example, was accepted by no solar developers.

They all proposed their own contracts before lawyers for both sides arrived at agreement individually tailored to each deal.

The state’s data practices law got in the way because vendors wanted more privacy in presenting their offerings. Several randomized lotteries were held to sell community solar to the project’s members, Willett said.

The lotteries had to be held because not every collaborative member could subscribe to the lowest priced garden in their area. Lotteries gave governments the option of taking, or rejecting, a subscription offer, he said.

For those governments which subscribed all will receive substantial savings, depending on the size of their contracts, as much $1.5 million. And those subscribers told Drake developers are contacting them to see if they are interested in buying more solar.

Still, Drake concedes “it’s not clear” the approach yielded better pricing. There was, he believes, a faster entry to the market but not nearly as rapid as the collaborative’s steering committee anticipated.

Staff time was greatly reduced for many collaborative members, Drake said, largely because the Met Council handled the request for proposals, selection and negotiation process.

The most surprising finding came from those in the collaborative who cited peer learning as a significant benefit. The group held meetings, developed a website and webinars and other materials for members, fostering a sense of community.

“We did not upfront list peer learning as a potential benefit – the opportunity for some participants to learn from one another and build capacity to evaluate solar,” he said. “But at the end participants ranked that as a strong benefit of the process.”

Willett said the collaborative met with the Met Council’s desire to advance solar energy in the region and to assist local governments on innovative projects.

After the project ended the council received unsolicited bids from several community solar developers and took advantage of a few of them, he added.

“You can see the big challenge we made for ourselves” in creating the collaborative, Willett said. “But we received lots of kudos, the solar industry liked it. Governments liked it.”

The collaborative, which ended last year, won the Environmental Initiative’s 2017 Community Action award. Its lessons, Drake believes, could inform other governments considering a plan to work together to purchase clean energy and other products and services.

Lindstrom agrees. “This one worked really well,” he said. “We would be open to future collaborations.”