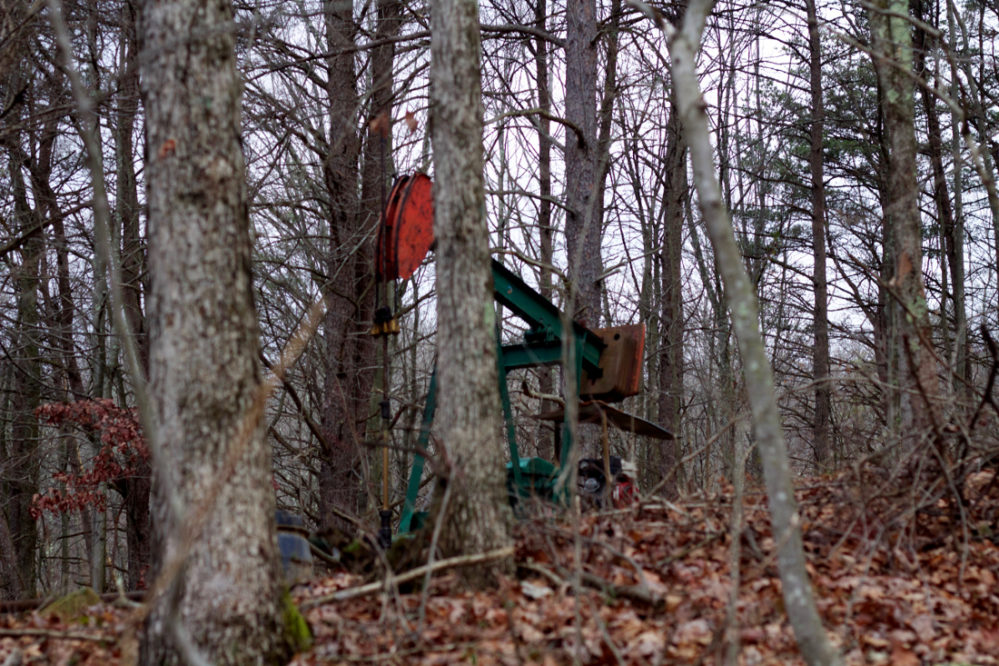 An oil rig in Wayne National Forest in Ohio.

Regardless of how regulators resolve their investigation into an April 2 earthquake in southeastern Ohio, drilling and well operators in the area will almost certainly need to do more careful monitoring and reporting in the future, now that there’s a known seismic risk.

“Any time an earthquake occurs, that’s an indication that there’s a fault there,” said geologist Michael Brudzinski at Miami University in Oxford.

The magnitude 3.0 quake on April 2 took place at 7:58 a.m. in the Marietta unit of Wayne National Forest in southeastern Ohio. “We hadn’t really seen [an earthquake] in the area where this one occurred” in April, with the exception of the two events of magnitudes of 2.3 and 1.8 on December 12, 2016, Brudzinski noted.

Nearby oil and gas activities are on hold pending further investigation by the Ohio Department of Natural Resources.

“Review of the seismic data placed the event in Monroe County in proximity to ongoing oil and gas well completion operations,” ODNR spokesperson Steve Irwin said. “Those activities were halted within an hour of the seismic occurrence.”

The April 2 earthquake “is a concern because it shows we don’t have a handle on all of the risks involved in this industry,” said Melanie Houston of the Ohio Environmental Council.

That worry is heightened by the fact that the federal government wants to open up more of the Wayne National Forest area for oil and gas development. “We’re inviting it into our only national forest, and it is really a concern and a problem for us,” Houston said.

Several factors could explain the April 2 earthquake, including natural tectonic movement. “We’re not a big earthquake state,” said geologist Pete Clapham at Cleveland State University, but that kind of geologic action “does happen. Is it something to worry about? Probably not.”

“Another thing that can happen is that you are dealing with human factors,” Clapham continued.

For example, some earthquake activity in Pennsylvania has been linked to old coal mines collapsing, Clapham noted. Fracking is another possibility, and it has been identified as a factor in earlier Ohio earthquakes.

Maps from the FracTracker Alliance show that several oil and gas extraction wells are within five miles or so of the April 2 quake’s coordinates. Wastewater injection wells appear to be farther away.

“There is…a big suggestion that this has been triggered by nearby activity” by the oil and gas industry, said Houston. “But whether it’s the injection wells that are really the cause or the extraction, we don’t know.”

The wells potentially linked to the April 2 seismic event are in Ohio’s Utica shale play. That area and the Marcellus play are the focus of Ohio’s oil and gas boom. Growth in the industry since 2008 has come from two technologies: horizontal drilling and hydraulic fracturing, or fracking.

Fractures caused by fracking are not the only cracks that can occur within subsurface layers. And either fracking itself or injection of wastewater can lead to increased seismic activity, Brudzinski said.

In 2015, for example, he and his colleagues linked 77 earthquakes to fracking, including a different 3.0 magnitude quake in Poland, Ohio. The team believed that the fracking activity had activated a previously existing fault in a very old layer called the Precambrian basement layer.

“The fault is pieces of two rocks that are trying to slide past one another,” explained Brudzinski. “The extra fluid injected starts to open that fault so it’s easier for those sides to slip past one another.”

Injected fluid isn’t “super slippery,” so it doesn’t exactly lubricate the fault, he said. “It’s just creating some extra space between the two sides.” In other words, the volume of water starts to “unclamp” the fault, “and then the fault can start to slip.”

“While the cause of this minor seismic event is unknown, we understand that ODNR has halted a hydraulic fracturing operation taking place within a five mile radius of the event,” Ohio Oil & Gas Association Executive Vice President Shawn Bennett said. “Per protocol, ODNR is in the process of monitoring the area and evaluating all relevant data as a precaution to ensure the safe development of oil and natural gas resources. Overall, Ohio has one of the nation’s most comprehensive set of requirements regarding seismic occurrences to address these rare instances.”

The April 2 earthquake was barely strong enough to be noticed, although the U.S. Geological Survey’s “DYFI” tab for the event shows that multiple people answered “yes” to the basic question of “Did you feel it?”

“As you approach level 4 (on the seismic magnitude scale), that’s where you could potentially get damage of structures,” Brudzinski said.

And even low-magnitude earthquakes from oil and gas activities should not be dismissed, said geologist Jeffrey Dick at Youngstown State University. “We should care about them because…if in fact we are inducing these earthquakes, we should do what we can to minimize them.”

Dick, Clapham and Brudzinski all agreed that a bunch of very minor earthquakes probably wouldn’t produce cumulative damage on the surface.

However, Clapham noted, “there is pretty considerable debate” among geologists about whether smaller earthquake events could make a future quake more likely to be larger and cause damage. And, he added, “because these events have happened, there’s just a known risk in this area.” So, future oil and gas operations in the area “would need to be careful and monitored.”

“People’s concerns are very legitimate, particularly since we live in a region where we’re not accustomed to earthquakes,” Dick said, although he added that part of the concern could be triggered by advances in scientists’ ability to detect and monitor earthquakes.

Moreover, there’s definite interest in expanding oil and gas operations in Ohio. Relatively low natural gas prices and pipeline constraints have limited some of that development, but the industry hopes to expand production as those factors change.

As a result, more liquid will likely be pumped down into the earth, according to FracTracker’s Ted Auch. His group’s analysis of water usage and production data for Ohio shows that wells are “requiring more and more water and proppant…to get the same level of energy out of the ground.” Eventually those fluids will need to be disposed of, Auch adds.

“Serious concerns about water security are going to start to percolate up,” Auch said. Sooner or later, he added, “we’re going to have to have a real serious discussion about how we price water.”

“This isn’t all just about the earthquakes, said Jen Miller of the Sierra Club. “The fact that we have any fracking going on at all in or near the Wayne National Forest or the Ohio River is a problem. You have two of our most precious resources in the state that are critical for both recreation and our economy. The Sierra Club has firmly opposed fracking in and near such sensitive areas even when earthquakes are not a risk. “

Among other things, oil and gas operations in natural areas can lead to noise pollution, water contamination, air pollution, disruption of wildlife habitat and disruption of recreational opportunities, Miller explained.

Meanwhile, although Dick personally doesn’t think there’s much risk to loss of property and life from earthquakes in Ohio, he feels that the oil and gas industry and regulators need to understand what’s going on.

“All of them want to try and understand why it’s happening and how you can mitigate or avoid it altogether, if possible,” Dick said.