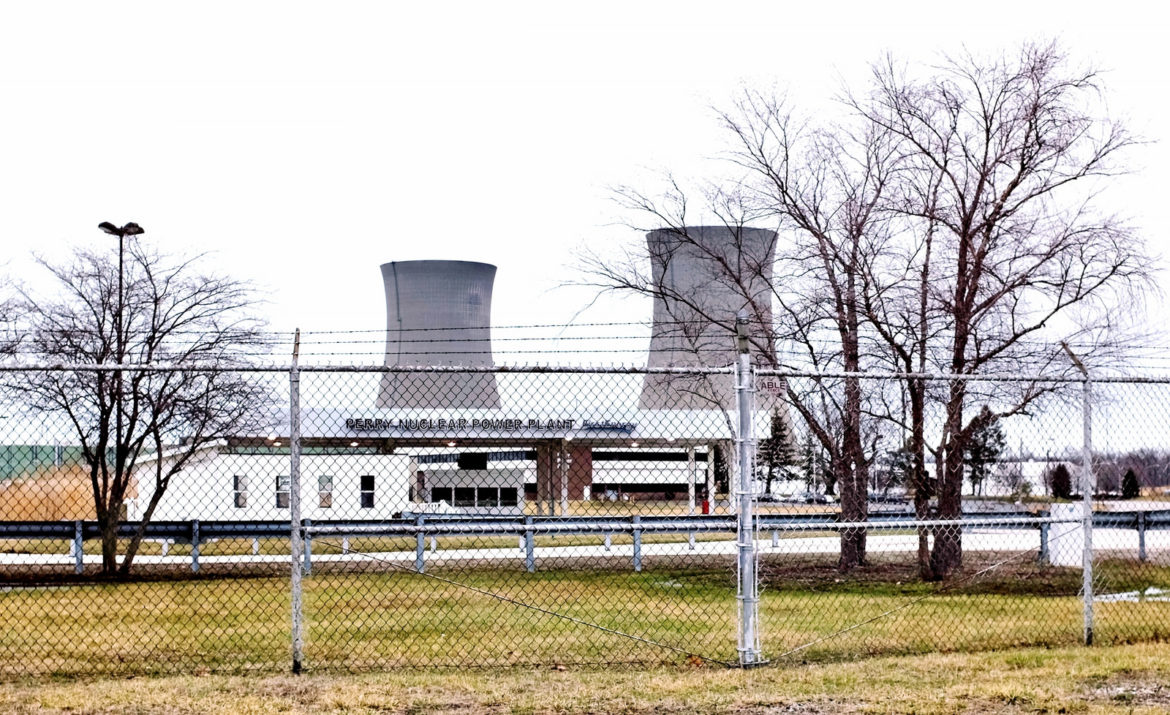 Senate Bill 128 would implement FirstEnergy’s zero-emission nuclear, or ZEN, program to have its Ohio utilities’ two million distribution customers pay above-market prices for as much as $57 per year for up to 16 years. That charge of about $5 per month would be in addition to a rider the company started collecting this year of nearly $4 per residential customer per month in order to prop up FirstEnergy’s credit rating.

Questions have also been raised about the fact that one of the bill’s two sponsors, state Sen. John Eklund, is also an antitrust and trade attorney with the firm of Calfee, Halter & Griswold, whose list of government relations clients includes FirstEnergy. The Legislative Inspector General’s database of lobbyists confirms that two attorneys in the firm’s Columbus office are identified as registered on behalf of the energy company.

“The coziness that there is between the legislature and this public utility…doesn’t smell good,” said Dick Munson of the Environmental Defense Fund.

When asked if there was an ethical problem in his sponsorship of the bill or whether he might need to abstain from voting on it, Eklund said, “the short answer is no.” As he understands it, an earlier opinion from Ohio’s Joint Legislative Ethics Committee would apply to the situation.

“I’m not doing this for FirstEnergy,” Eklund continued. “I’m elected to represent my district, which as you know includes the Perry Nuclear Power plant, and I have deep, deep concerns about what the possible closure, shuttering of that facility, would do to the communities that it’s in and that surround it, and the entire northeast Ohio area.”

Critics say the FirstEnergy nuclear ZEN bill would conflict with both the grid operator’s rules and with federal law on wholesale energy markets.

“The Hughes case is key here,” said John Shelk of the Electric Power Supply Association. In that 2016 Supreme Court decision, the Court unanimously held that a Maryland law designed to increase in-state electricity generation was invalid.

“The nuclear plants are wholesale generators with market-based rate authority from FERC…, which the Supreme Court says is FERC’s territory and not for a state to invade,” Shelk said.

“I don’t believe that it interferes with any federal jurisdiction over generation markets,” he said. “This is a matter of distribution utilities being expected to buy credits and recoup that cost through a rider. So it seems to me that it’s more of a distribution measure than it is a generation measure.”

Soon after the Hughes decision last spring, however, the Federal Energy Regulatory Commission ruled that it would need to scrutinize proposed power purchase agreements to guarantee sales from certain nuclear and coal plants owned by American Electric Power and FirstEnergy, including the Davis-Besse power plant. Critics complained that those agreements interfered with the wholesale market and were a “bailout,” rather than an arms-length deal in customers’ best interests.

SB 128’s policy statement favoring nuclear energy “of course conflicts with the PJM rules” for the regional market in which FirstEnergy’s plants operate, added Todd Snitchler of Vorys Advisors in Columbus. His firm represents a group of competitive energy suppliers known as Alliance for Energy Choice.

Less than a week before SB 128 was introduced, grid operator PJM released a report showing that reliability of the region’s electricity supply should not be a problem as more coal and nuclear generating facilities retire. Any questions about individual plant closings could be dealt with on a case-by-case basis, PJM’s Mike Bryson said during a telephone press conference on March 30.

Eklund said he thinks “that a diverse energy portfolio is terribly important to the state of Ohio and to the country.” However, the PJM report undermines that justification for SB 128.

“More diverse portfolios are not necessarily more reliable,” Bryson said. Although some generation mixes with more coal and nuclear power might have more reliability, the relationship between diversity of the energy mix and reliability of the electric supply is not a linear one, Bryson said.

The electricity market already has anti-competitive elements in it, Eklund suggested.

“When we tell distribution utilities that they must acquire…an ever-increasing percentage of their customers’ energy needs from renewable and alternative energy sources, that doesn’t sound very much like a competitive market to me,” Eklund said. “That sounds like the state of Ohio telling distributed utilities what they must and must not buy.”

Unlike renewable portfolio standards, which can benefit a range of technologies, FirstEnergy’s nuclear ZEN bill “favors only nuclear, owned by one company,” Snitchler stressed. “Also, REC [Renewable Energy Credit] markets operate like a market, meaning the price is set based on supply and demand and not an arbitrary price.”

SB 128 also differs from nuclear subsidy programs in New York and Illinois, in which supporters argue that the current subsidies are part of a package to allow a transition to more renewable energy, according to Munson. SB 128 is “just tailored specifically to the Perry and Davis-Besse plants,” he said.

Nor does the bill’s language seem to contemplate increasing the state’s share of renewable energy. “It simply maintains the status quo,” Snitchler said. Also, he noted, the bill’s language “is carefully crafted to ensure only nuclear resources meet the standard, and…FirstEnergy is the only company [that] can benefit.”

A cloak of secrecy?

SB 128 also proposes to deem any records relating to subsidized nuclear plant costs to be exempt from Ohio’s public records law. Thus, if the bill were to pass, data relating to those costs would be shielded from public review.

“The ability to protect data and exclude it from public records is striking in that FirstEnergy is asking for potentially billions of dollars from customers to support its generating resources that it claims are good for the public, yet the very people paying the costs and [who] supposedly benefit from the environmental outcomes have no access to any of the information,” Snitchler said. “It seems far more reasonable to permit those paying the significant costs and receiving some perceived benefit to see how the costs are calculated.”

“FirstEnergy’s distribution company is a monopoly, and therefore must be required to be transparent about the costs and benefits of their operations,” Jen Miller of the Sierra Club said. “Without that transparency, they cannot be adequately monitored by the PUCO or public interest groups, like the Sierra Club.”

FirstEnergy has said it plans to sell its two Ohio nuclear plants, and approval of the legislation would presumably let the company get a higher selling price, Munson noted.

Yet Young did not list that factor when she was asked how the legislation would benefit the company and its shareholders.

“The legislation aligns with FirstEnergy’s commitment to delivering the power our customers need, securely and reliably, and we believe ZEN is the right thing to do for Ohio,” Young said.